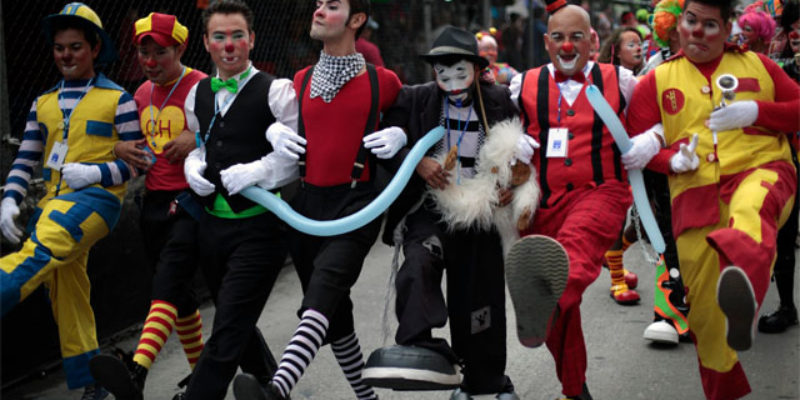 We now present the third offering in our weekly cavalcade of the most moronic, insipid and sometimes frightening editorials printed in Louisiana’s student newspapers. Read the excerpts below at the risk of your faith in our state’s future.

You’ll see a sampling of opinion columns and editorials below and you’ll also see the Twitter handles of those responsible, as well as an accounting of the university faculty who are in charge of supervising the publications in question.

Why do this? Simple – amid the screaming by Louisiana’s higher education officials over the state’s attempts to cover a $1.6 billion budget deficit, coming as it does amid a national recognition that higher education in and of itself is a bubble ready to burst, and further coming as it does amid a growing recognition that the culture being milled at universities isn’t just divorced from mainstream American culture but is in fact openly hostile to it, it’s worth shining a light on what it is we’re being asked to subsidize.

Nobody reads campus newspapers. Now we’re doing it so you don’t have to.

And with that, away we go…

Opinion: LSU has seen positive changes over the past four years

My senior year of high school, I told my mother I didn’t think racism, sexism or homophobia existed in my generation. Of course, there were still racist, sexist and homophobic people in America, but they were all older and ignorant to the strides millennials had taken toward true equality. Nobody my age could possibly still be clinging to ancient stereotypes about women or minorities.

A month into my freshman year, I called my mom and admitted that I had been devastatingly wrong about my generation.

Both my high school and my hometown were filled with liberal, open-minded people who eagerly learned about the world around them and paid special attention to the struggles minorities face in this country. I assumed LSU and Baton Rouge would be the same.

At this school, I have watched racist stereotypes perpetuate themselves on campus in a way that I wouldn’t have thought my fellow millennials were capable of. I have seen women and members of the LGBT community face the kind of discrimination that can only be sustained by willful ignorance.

At the end of my junior year, I couldn’t wait to finish my last year of college so I could escape this school forever. I watched graduating friends post Facebook statuses about how much they were going to miss LSU and rolled my eyes — there wasn’t a single thing I was going to miss about this place.

I scoffed at the closing words of the alma mater. I was not going to let my worth in life be this community’s worth. The spirit of hatefulness and ignorance that I witnessed on this campus would not live on within me.

But over the course of this year, I have watched LSU change.

Minority communities on campus have reached their boiling points and are fed up with the way they’ve been treated at this school. People are making sure their voices are heard, regardless of whether LSU wants to listen.

Students have organized demonstrations, rallies and marches to raise awareness of the issues minority communities face. Administration members have been called out for allowing people who conserve stereotypes to speak on campus. Campaigns have been waged against traditions that some members of the LSU community cling to, despite the inherent racism and sexism of those traditions.

And the punch line…

Revolution is coming to LSU. This campus cannot and will not remain the way it is.

I’m sad this revolution didn’t occur during my time here. But I’m glad I will leave LSU knowing that students constantly will be pushing for change and won’t stop until that change comes to LSU, Baton Rouge and the entire state of Louisiana.

That’s from “Logan Anderson,” 21-year-old mass communication senior from Houston, Texas. Her twitter handle is @LoganD_Anderson, and if you go there you’ll find gems like this…

The #BaltimoreUprising is not Ferguson. Stop comparing the only two examples of black resistance you’ve ever seen.

In almost every article written about Sanders, news reporters say the most he can do is push Clinton more to the left. In other words, he can’t win. He can only help Hillary Clinton win.

While Sanders might lose the Democratic primary to Clinton, that’s not for the media to decide. The media are treating Sanders like a dark horse candidate who’s no real threat to Clinton, and the more the media treat Sanders as such, the more people will believe it.

There’s no reason why Sanders shouldn’t be treated as a threat. The Elizabeth Warren-loving Democrats should love Sanders because he’s just as progressive. Both Senators want to tackle income inequality and Wall Street. Warren advocated for refinancing student loans, and Sanders proposed making the first two years of college tuition-free for everyone.

Sanders is also against taking corporate money for his presidential race. His biggest financial supporters are unions, while Clinton’s biggest supporters are bankers like Citigroup and Goldman Sachs.

Clinton’s close ties with Wall Street mean she’ll most likely do as President Obama did and support big banks over the American people. She’s not going to regulate the banks if she’s getting money from them, and we desperately need more banking regulations so we won’t have another recession like the one in 2008.

Sanders, on the other hand, supports American citizens over banks and corporations. His disclaimer at the bottom of his campaign website even says, “Paid for by Bernie Sanders 2016 (not the billionaires).”

Okay, so his disclaimer might make him sound like a crazy old man from the Northeast — which he might be — but his political positions support the American middle class. He wants to raise the minimum wage, make college more affordable, provide universal health care and rebuild our infrastructure.

Franklin Roosevelt proposed some of those things with his New Deal, and that seemed to work out well for America.

The writer is Cody Sibley, a 19-year-old mass communication freshman from Opelousas whose Communist Youth scribblings we’ve profiled in past installments of this feature. . His Twitter handle is @CodySibley. Nothing there is of even mild interest.

Responsible for the content of the Reveille is Bob Ritter, Director of Student Media at LSU (Twitter: @rwritter)

Up in the northern part of the state, the editor-in-chief of the Tech Talk at Louisiana Tech is incensed at Texas governor Greg Abbott’s scrutiny of the military’s Jade Helm exercises…

Generally, these kind of ravings are confined to poorly run Internet message boards about the rise of the reptilians and lots of calculations about how jet fuel can’t melt steel beams.

By all accounts, this should not be a news story.

But, Texas Gov. Greg Abbot ordered the Texas State Guard to monitor the exercises in order to ensure the safety of his citizens.

You read that right. State money and efforts are going toward using the state guard to police the national military force.

A force, I remind you, they have no actual power over.

Abbott, who ran on a campaign touting his defenses against Obama’s “federal overreach,” is so distrustful of the American government he bows to the wishes of the farthest fringe groups he can find.

But whenever you mistrust the American government so much to assume they are invading land they already own in order to impose martial law, you have no business running a state.

That isn’t exactly what Abbott is doing, but why screw up a good column bitching about crazies who don’t trust the government?

John Sadler, the writer, doesn’t apparently use Twitter. He’s a junior journalism and English major from someplace called Extension who serves as editor for The Tech Talk. Michael LeBlanc is the faculty advisor and production manager at that publication; it doesn’t look like he uses Twitter either.

And at Southeastern, we have the social media police at work…

Do not get mad over social media

Life is filled with mishaps that we are unable to control, such as a random storm in the middle of a sunny day and forgetting to bring an umbrella.

This may dull our day, but there is nothing we can do about it.

Another aspect we can control is who we follow on social media. Yes, it is very sad that this is what our world has come to, but we live in the 21st century, filled with technology-driven individuals.

First off, half of these annoying posts come from followers ranging from around 18 to 40 years old. Shouldn’t you be worried about what tests you have coming up or bills you need to pay? Why are you worrying about another post?

Secondly, as much as you may not like reading their posts, others do not enjoy scrolling through your complaints either.

Lastly, if the statuses or pictures really bother you, I have a simple fix. Go to their page, press “unfriend/unfollow,” sit back and smile because you are in control of your account.

Megan McCormick, the writer, seems like a nice kid. One wonders whether the Lion’s Roar is so hard up for content that “strongly-worded Facebook statuses” merits dead trees and ink, though.

Of course, with this being Finals Week throughout the state there wasn’t a lot of activity among Louisiana’s campus papers. We found much more in our first and second installments.