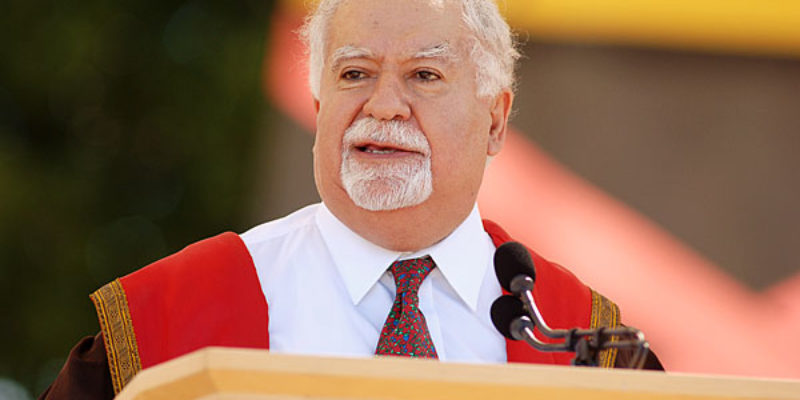 Chances are you have never heard this name, but Xavier University decided to honor the Carnegie Corporation President at their spring commencement ceremony for the class of 2015 by having him speak and giving him an honorary doctorate. According to Xavier, Gregorian made “extraordinary contributions to humanity.”

But, there is a little more to Gregorian that Xavier students should be aware of and should thus provoke protesting for Xavier’s odd open-arms to Gregorian.

While Gregorian may be most recognized for his authorship of books about his life as an Iranian and the Middle East, he is also a friend of President Obama’s and has ties to domestic terrorist William “Bill” Ayers.

Gregorian was appointed by Obama in 2009 to the president’s White House Fellowships Commission. Aside from this, Gregorian also helped lock in a $49.2 million grant of start-up capital an education-reform project, known as the Chicago Annenberg Challenge, which was chaired by Obama and founded by former Weather Underground terrorist Bill Ayers.

WND exposed years ago that Gregorian was a key figure in Obama being recruited by Ayers for the position with the Chicago Annenberg Challenge. During this time, Obama worked very closely with Ayers on the project.

The grant money that was given to Obama and Ayers by Gregorian was then used to fund organizations that were run by radicalized left-wing figures like Mike Klonsky, who was a prominent communist activist that ran a group in the 1960’s that was created after the Weather Underground terror group disbanded.

Also, Gregorian has ties to the Muslim Brotherhood and in a book review by the Middle East Forum, his work “Islam: A Mosaic, Not A Monolith” is described as establishing “the Islamist goal of world domination.”

Back in March, Aymond criticized Xavier’s selection of all liberal speakers, saying that many of them did not represent the “values and teachings of the Catholic Church.”

Why would a Catholic university like Xavier even acknowledge, let alone award, a figure with ties to a domestic terrorist and who holds views counter to the church’s teaching on Christianity?

But, more importantly, where is the outrage from Xavier students who find the university’s choice in speakers to be against the values and morals of the Catholic Church?

Where is the protesting?