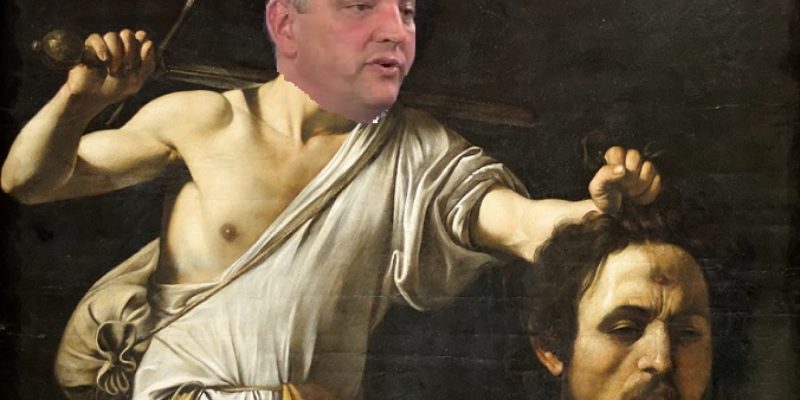 In a recent email from John Bel Edwards’ (D-Amite) gubernatorial campaign, Edwards was compared to the great Biblical character ‘David’ from the ‘David and Goliath’ story.

Jeremy Alford said in a column this week that he received the email which appeared to have been addressed by Edwards’ wife, Donna Edwards, in which she said that her husband was the underdog in the gubernatorial race, just like David was in his battle against Goliath. Here’s how Alford described the campaign email:

Emails also allow for a shrewdness that doesn’t necessarily translate as well in paid advertisements or social media. Take for example another I received last week from Donna Edwards, the wife of state Rep. John Bel Edwards, the Democratic favorite running for governor. The subject line, “Biblical David,” immediately caught my attention. And many others based on the forwards and comments that were sent my way.

Alford describes how Edwards is depicted in the email as being “our Biblical David” for the state of Louisiana. Though gubernatorial front-runner Sen. David Vitter (R-LA) was not mentioned by name in the email, Mrs. Edwards points out that “Goliath was an immoral Philistine giant — the consummate bully.”

Then, at the bottom of the campaign email, “a ‘generous donation’ was requested to underwrite ‘our Slingshot to Victory,'” Alford wrote of the email. Essentially, the email depicts Edwards as David, the small, underdog and Vitter is the Goliath, the big, bad Philistine.

Edwards is the only Democrat so far in the gubernatorial race. He faces competition from Vitter, Lt. Gov. Jay Dardenne and Public Service Commissioner Scott Angelle.