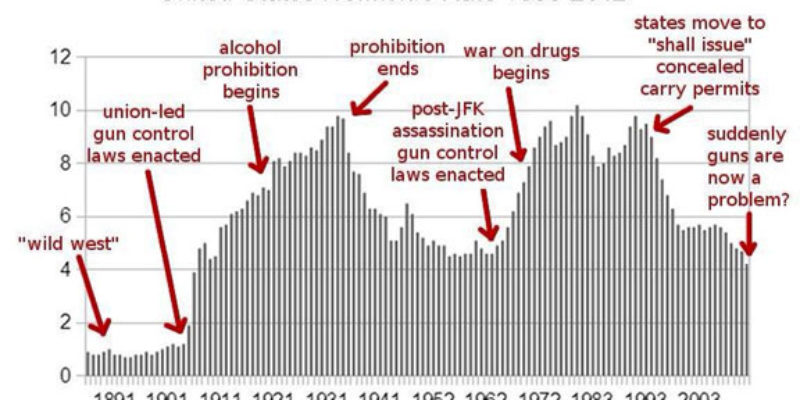 …before the fact that some defective trailer-trash skinhead hopped up on every kind of drug he could get his hands on and possessed of a similarly defective father decided to stage the deadliest attack on Christianity in decades and used a gun rather than a bomb to do it makes a meal for the gun-grabbers out there.

Interesting history in that timeline above, no?

What it shows is the more folks have guns and know how to use them, and the more it’s recognized that everywhere you go you’re likely to run into someone who has a gun and can put a stop to whatever awful things you might decide to try, the less likely it is that a murder will occur.

And if you understand anything about humanity this won’t surprise you.

People aren’t born good. In fact, human instincts aren’t all that different from animals in the wild. That’s where we came from, after all. We’re natural predators and killing is hard-wired within us.

We’re also capable of civilization, which is the reason we’re in charge of this planet rather than dugongs or slow lorises.

That’s the duality of man, and every poet and philosopher in history has spent an inordinate amount of time ruminating on it.

The point being that humans aren’t intrinsically good. We might be made in God’s image, but that doesn’t make us godly. Godliness is learned and earned, if it is achieved at all. Civilization is the means by which what virtue we do possess is learned.

And guns, contrary to what the Left would have you believe, are a very effective tool in civilizing people.

Sure, a gun in the hand of a villain, if he is surrounded by innocents who don’t have a gun, can be disastrous. But put a sword or a bat or a whip or a hand grenade in the villain’s hand and he can do just as much damage to the unarmed – it might just take a varying amount of time  for him to do it.

But a gun in the hand of an innocent will make the villain much less effective.

That’s called civilization. When we are deterred from our basest desires and restrained from acting out the evil within us for fear that the result will not be to our liking, our behavior is much improved. And the improvement of that behavior is the process of civilizing us.

Dylann Roof wasn’t possessed of civilization. He was possessed of something else. Evil is a good word for it, and certainly hatred would be a valid description. Somebody taught him the crackpot tribal theories to which he subscribes; it’s a decent bet the same man who gave him the gun he used to kill those people in Charleston could be the one.

But the result of Roof’s atrocity didn’t have to be what it was. Had someone in that church the means to fight back, and had Roof known he would be in for a gunfight rather than a turkey shoot, it’s a good bet he wouldn’t have killed anybody Tuesday night.

We are not the perfectly civilized society the Left wants us to be, and we will not be in our lifetimes. Our best chance of peace lies with more of us armed and capable of defending ourselves and those around us, not less.

You can’t reform a Dylann Roof. He’s evil. He will either be deterred or defeated. The people in that Charleston church didn’t have the means for either, and he made them pay.

To use his evil as a pretext for denying the rest of us the means to deter or defeat the next Dylann Roof – who will use what means he has available, be it a gun, a bomb, a sword, a bat or a whip, to commit his crimes, regardless of what the law says – is wrong. It’s cynical, it’s arrogant and it’s tyrannical.

And it’s sad and disgusting that our president, who should be doing everything he can to heal the nation’s wounds at a time like this, would immediately demand gun control in the wake of this atrocity.