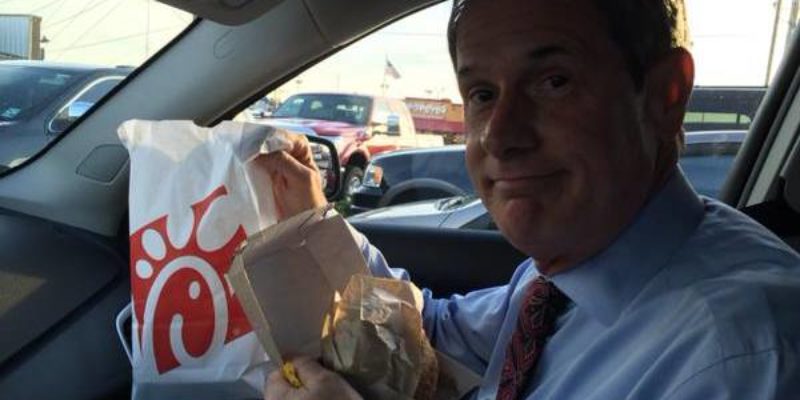 Nowadays, you can’t even eat in peace without the Left going on a political correctness tirade.

When the United States Supreme Court ruled last week that same-sex marriage was constitutionally protected under the law, the Left did went wild on social media, calling anyone who opposed the ruling a ‘bigot.’ 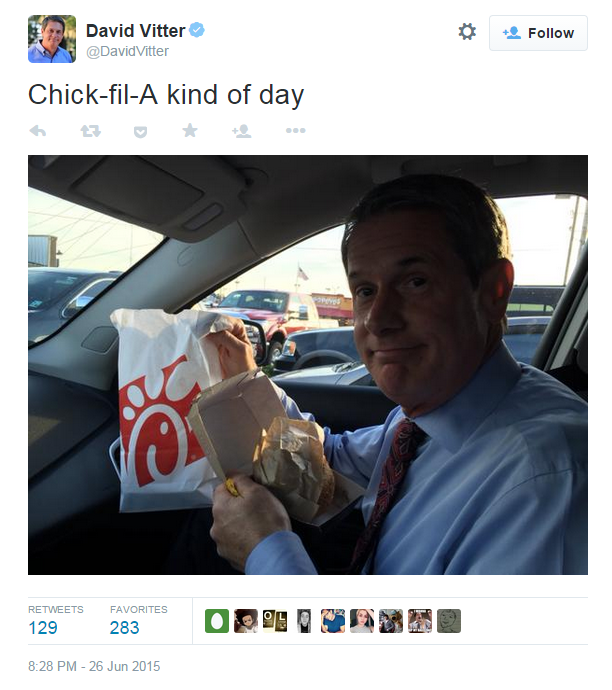 From the picture, this is just Vitter eating a Chick-Fil-A meal. To liberals, its downright hateful bigotry.

Chick-Fil-A famously supported traditional marriage a couple of years ago and the Left could not handle the overwhelming amount of support that the fast food chain received.

Ever since, the media and the Left have had nothing but disdain for Chick-Fil-A. Therefore, Vitter posting the photo prompted all kinds of attention from media outlets.

Here are a few of the ridiculously politically correct nonsense that some media outlets gathered from Vitter’s Chick-Fil-A photo:

As I reveled in the tears of conservatives responding to the Supreme Court’s ruling on same sex marriage, I came across one particular Republican Representative clown who epitomizes the laughable hypocrisy of the right-wing.

David Vitter thought he could cleverly troll those in favor of marriage equality by tweeting a picture of his sphincter-esque face next to a bag of Chick-fil-A. The fast food chain made headlines back in 2012 when its CEO Dan Cathy publicly objected to same sex marriage. Republicans have proudly stuffed their faces with fried chicken sandwiches to flaunt their bigotry ever since.

Prostitute patron and generally gross right-wing Sen. David Vitter of Louisiana decided to celebrate Friday’s Supreme Court decision on same-sex marriage by … going to Chick-fil-A. Then by tweeting a picture of himself eating Chick-fil-A in his car.

Vitter, who got caught in the D.C. madam scandal last decade and is among the worst Republicans to make any “traditional value” argument, isn’t the highest-aptitude senator in the GOP caucus, but it still seems safe to assume that he wasn’t simply hungry. He dug into that Southern-style chicken sandwich as a lame fast-food dog whistle, as the family behind Chick-fil-A has donated millions to anti-LGBT organizations.

When SCOTUS made gay marriage the law of the land on Friday, Louisiana Senator and gubernatorial hopeful David Vitter decided to eat his sorrows by getting a giant greasy bag of artery-clogging fast food. He tweeted a picture of himself holding Chick-fil-A sandwich along with the caption: “Chick-fil-A kind of day.”