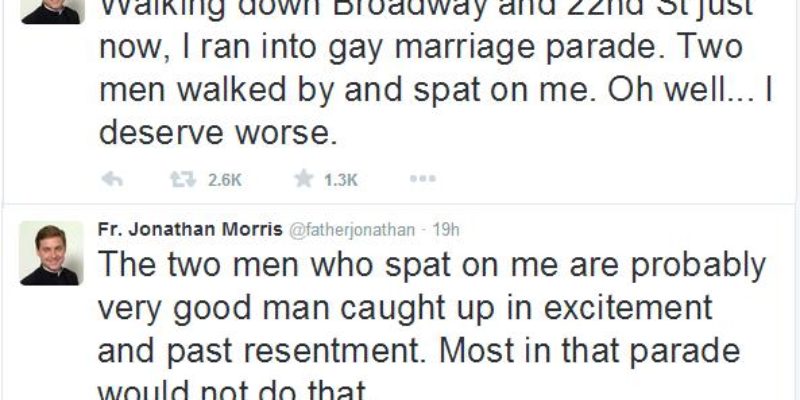 Whenever a major, national story appears in the news regarding some kind of hate-filled behavior that a supposed ‘Christian’ committed, every Christian around the country is asked to rebuke the behavior.

However, when it comes to the intolerant and hateful faction of the gay community, the story does not even make headlines.

When gay marriage was legalized across the country last week, the Twitter and Facebook hashtag ‘#LoveWins’ began floating around the internet, accompanied by a rainbow heart.

With all of the tweets and Facebook posts about love and marriage, Fr. Jonathan Morris’, the Bronx Catholic priest and Fox News commentator, tweets stood out like a sore thumb.

Here’s the hate that Fr. Jonathan endured this weekend: 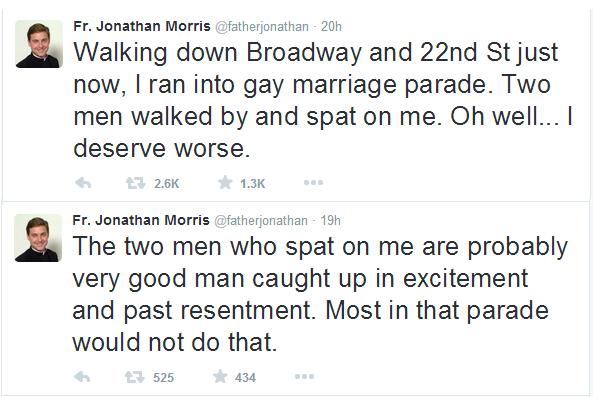 All the love going around last week and over the weekend was only love for those who supported the decision. If you’re like Fr. Jonathan Morris and dare disagree, some in the gay community will ridicule you with hate and intolerance.

The irony is that the gay community’s premise and arguments in court were all about equal treatment, love, fairness and tolerance.

Where’s the tolerance and love in spitting on a Catholic priest because he disagrees with you? Yet, the gay community will not be asked to actually practice what so many preach. Fr. Jonathan, though, publicly apologized and downplayed the hateful behavior.

Interested in more national news? We've got you covered! See More National News
Previous Article A Glimpse At The World Of The People Who Hate Bobby Jindal
Next Article Low Popahirum, June 29, 2015