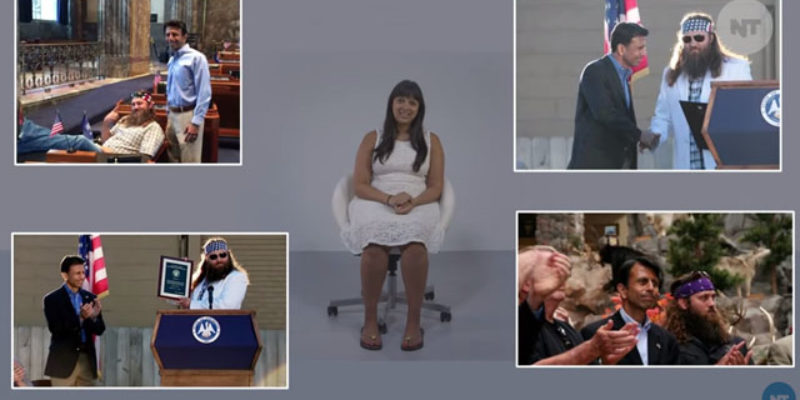 I’m not really all that interested in bashing the Jindal for President campaign, because frankly the outpouring of bile and vitriol from the Left in the week following the governor’s announcement and the further howling and screaming the Bob Manns of the world have been doing since he went on Meet the Press yesterday and threw a bit of red meat over the Supreme Court and the gay marriage issue have really begun to depart from simple political opposition and become something a bit more pathological. At the bottom of this post you’ll find a cut-and-paste from Jindal’s latest fundraising email that shows it to be a bit on the hucksterish side, and so far Jindal’s campaign looks to be a B-list operation (that hidden camera video in the trees where he’s talking to his kids about running for president never should have survived the cutting room), but Jindal’s operation can show lots of flaws without sinking below the depraved level of the people bashing him in the last few days.

And that’s coming from somebody who has been consistently critical of the idea that Jindal would run for president in 2016. I don’t think he’s a viable candidate and I don’t think his record as governor of Louisiana, which I would nevertheless say is on balance a positive one, rises anywhere near to the level of qualifying him for the White House.

I can say that as a matter of objective analysis without malice. Jindal’s critics on the Left can’t, or at least don’t want, to do that. And when he offered that quip about being “tanned, rested and ready” to run, the insanity on the Left blasted into orbit.

There is a video circulating on Facebook about Jindal and how his decision to fully assimilate into an American identity, eschewing the term Indian-American owing to his distaste for hypenated Americanism and so forth, is offensive to other people who are of Indian descent. It’s one of the most irritating, galling things you can imagine, and it’s a little bit frightening in its shaming of people who buy into the idea of a melting pot rather than a salad bowl. Featuring an obnoxious politically correct woman of Indian descent, it makes fun of Jindal calling himself Bobby in all the ways Louisiana Democrats have done for a dozen years and essentially brands him inauthentic for not expressing an affinity for Hindu culture.

Here, watch it and see if it doesn’t piss you off…

At the end, this isn’t even about Jindal. He’s just a vessel for these people to pour all their vitriol into, and since his campaign isn’t particularly strong at messaging they know they can go bananas on Jindal without getting a resounding pushback.

What it’s really about is the effort to deny people of ethnic backgrounds not overly frequently found in the Republican Party or “traditional” America the ability to be seen as normal. It’s about Otherizing an Indian-American who doesn’t want his identity or that of his kids defined as something primarily derived from a country his parents rejected. It’s about trying to make people whose ancestors came from India, or Vietnam, or Honduras or Sierra Leone believe they won’t be accepted by “white” society unless they shame ordinary white people into accepting them on the terms of that ancestry.

That has never been what America is about, and frankly it’s never been what any great country has been about. Nations have their own culture, and America without question has ours. That culture is what brings people here from all over the world, and it’s not only a good thing but a necessary thing that we celebrate its superiority over that of other countries (there are lots of cool things about India, but there are damn few people leaving America to emigrate there while there are lots of Indians coming here and there’s a reason for that) – and particularly that we celebrate the people from other cultures who wholeheartedly buy into and endorse that American culture.

Jindal can be proud of the fact that after his parents left India and settled in Baton Rouge, he has chosen, with the freedom you have in America to do so, to live his life as an American without a hyphen. That’s the embodiment of assimilation. Changing his name to Bobby as a small child wasn’t some political stunt, it was a mark of successful Americanization. He’s a success story regardless of how good his record as Louisiana’s governor was.

And to attack that, of all things, rather than his budgetary record or his position on gay marriage, or any of the other things the Left doesn’t like about Jindal, is ugly. It’s divisive. And it’s, frankly, tyrannical. Who are these people to deny Bobby Jindal the right to forge his own identity?

That said, as promised here is the cheesy fundraising e-mail the Jindal campaign sent out this morning – lest anyone accuse me of shilling for the governor…

Our finance team just e-mailed me, and they tell me we are $6,545 short of where we need to be today to hit our end-of-quarter fundraising goal.

We were brainstorming about how to get back on track, and we have a plan.

Can you help? The Governor is looking for an update this afternoon. I want to be able to tell him you helped him out on such short notice.

Click here to make an instant contribution. If you do it right away I’ll make sure you’re on the list of people we send to the Governor later today.

You’ve got to be kidding. Call me. I know who will help us.

Quick update: we need $6,545 today to get back on track to hitting our end of quarter goal.

Interested in more national news? We've got you covered! See More National News
Previous Article Ask Yourself If This Is A Campaign Announcement A “Staunch Conservative” Would Give
Next Article #LoveWins? The Hateful, Intolerant And Anti-Christian Behavior The Gay Community Should Condemn