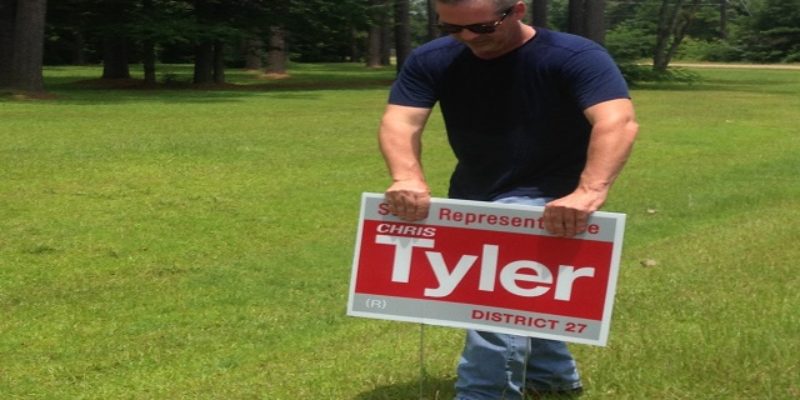 State Rep. Chris Hazel (R-Pineville) has a challenger for November. His name is Chris Tyler, a Pineville businessman and self-described “staunch conservative.” Here is his campaign announcement, our emphasis in bold:

“Today I am announcing my candidacy for State Representative in District 27. This encompasses almost all of the north side of Rapides parish as well as the area around and including Cheneyville. I was born and raised in Rapides parish and have been fortunate enough to live and work here, while others were forced away to find employment. I own several businesses, the largest being Protemp Staffing, which opened in 2003 and now has four locations throughout the state.“

“As a business owner, I have created jobs in my community and this has become the driving force behind my decision to run for office. Our biggest need is job creation. While Representative Hazel might be a nice guy, he has sat idly by as hundreds of our state’s jobs and dozens of services have been cut from our community. We cannot afford more of the lackluster leadership and irresponsible behavior he has shown us the last 8 years. He simply must be replaced.”

“I am a staunch conservative. I attended public school in Rapides parish and having graduated with a B.A. from LSU and an M.B.A. from Louisiana Tech. My education serves as a basis for my conservative values. My experience in the business world provides the foundation that makes me ideally suited to represent you. Those who know me best, know that I have truly enjoyed my life, but can also testify that I am very dedicated to this task in which I believe so strongly. Our need for change is so great, I am putting a substantial amount of my own money into this campaign as proof of my conviction. In the next weeks, I look forward to meeting all of you and letting you get to know me. I am asking for your vote and all of you to join me in putting Central Louisiana back to work. Together we can give our district the strong political voice we need and deserve.”

When Tyler made his announcement, some sources contacted The Hayride and offered up some information about Tyler’s voting history. This public information tells you the history of a person’s partisan affiliation and every election they voted.

It turns out that “staunch conservative” Chris Tyler was not a registered Republican until very recently. He had no party affiliation until a few months ago when I’m sure he started considering this race.

It looks like that Chris Tyler is as much of a “staunch conservative” as Forest Wright was last year.

Interested in more news from Louisiana? We've got you covered! See More Louisiana News
Previous Article Klavan And Whittle On Stupid Selfies And The Decline Of Civilization
Next Article A Glimpse At The World Of The People Who Hate Bobby Jindal