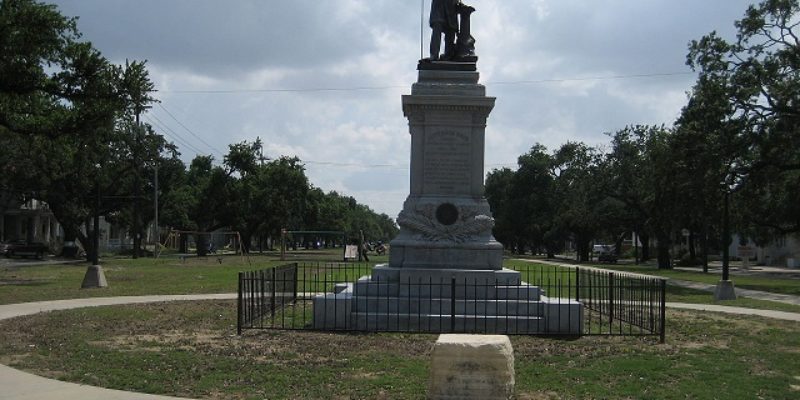 It’s a symbol of history that some say is offensive and represents oppression, but not everyone in the Crescent City sees it that way.

The Jefferson Davis monument in Mid-City is located in a busy section of New Orleans. But one local pastor wants to see the monument removed.

“It is a monument that seeks in its purpose to divide us,” said Shawn Anglim, pastor for First Grace United Methodist Church.

The monument sits at Canal Street and Jefferson Davis Parkway and displays Jefferson Davis, who was president of the Confederate States of America. Just a few yards away, sits Anglim’s church with a sign that reads “Take Down Jeff Davis Monument” on one side and “Black Lives Matter” on the other.

“(It’s) not someone who unites us, (it’s) someone who celebrates a time period when we said it was OK to own people in our country,” Anglim said.

Anglim has one of the most diverse churches in New Orleans. It’s a church that helped bridge the racial divide after Hurricane Katrina when two congregations, one black and one white, merged in the aftermath of the storm.

The Confederate States of America was built on a foundation of evil. It was established for the purposes of preserving slavery and white supremacy. Confederate Vice President Alexander Stephens was very clear about his nation was all about in his infamous “Corner Stone Speech”.

Our new government is founded upon exactly the opposite idea; its foundations are laid, its corner- stone rests, upon the great truth that the negro is not equal to the white man; that slavery subordination to the superior race is his natural and normal condition. This, our new government, is the first, in the history of the world, based upon this great physical, philosophical, and moral truth.

As a white Southerner and descendant of both slave owners and Confederate soldiers, the values of the Confederate States of America are certainly not mine.

However, I’m also not in favor of whitewashing our history. Jefferson Davis and his nation, for better or worse, is a part of history. After all, we’re talking about a man who died in New Orleans. Removing his statue because it offends some people is silly. After all, it’s not like the Union was exactly promoting a multicultural society at the time.*

If we’re going to remove statues of people who weren’t exactly saints by our modern standards, we’ll have to remove the statue of Andrew Jackson. Huey Long was a socialist dictator here in Louisiana, but I don’t see anyone wanting to change the names of all the landmarks named after him or tear down his statue in Baton Rouge.

The South and New Orleans in particular has too much of a rich history to be defined by a four year period between 1861-65. These monuments to Jeff Davis and other figures of the Civil War are a part of who we are, but they should not be entirely who we are as a people.

*I bring up Northern white supremacy not to excuse the Confederacy, which built its entire nation on the concept, but to merely point out the prevailing racial attitudes on both sides of the Mason-Dixon line at the time.

Interested in more news from Louisiana? We've got you covered! See More Louisiana News
Previous Article Jindal Launches His Bid For Energy Secretary Today…
Next Article How Planned Parenthood Is The Most Racist Symbol In New Orleans