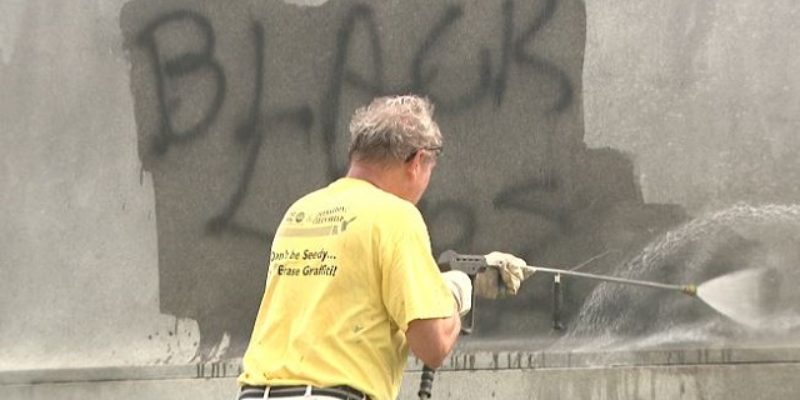 New Orleans Mayor Mitch Landrieu has been trying to disappear various statues of Confederates around New Orleans. One of those statues he’s trying to send down the memory hole is that of Confederate General P.G.T. Beauregard in City Park.

No doubt taking their cues from Mayor Landrieu, a group of punks spray painted the slogan “black lives matter” on the Beauregard statue. So how did New Orleans respond? The city government did nothing but citizens of New Orleans stepped up and took care of the problem.

According to the Times-Picayune, a group of citizens devoted to preserving New Orleans’s monuments stepped up and had the statue cleaned up and removed the graffiti.

Fred Radtke, who works as an independent contractor, and the Monumental Task Committee cleaned graffiti off of the P.G.T. Beauregard statue Monday (June 29) at City Park Avenue, near the entrance to New Orleans Museum of Art.

The statue was spray-painted with the words “Black Lives Matter” on both sides of its base. Beauregard was considered the first prominent general of the Confederate States Army during the Civil War. According to the website New Orleans Historical, it took 20  years to raise the $22,000 needed to build the monument, which was completed in 1915.

“Black Lives Matter” has become a common refrain at protests across the United States of police violence toward African Americans.

Unlike Mitch Landrieu, the Monumental Task Committee is devoted to preserving all of New Orleans’s history through preserving all of the city’s monuments. They realize that in order to learn from history it has to actually be there, not demolished ISIS style in a fit of white guilt.

One final thing about this purging of Confederate symbols, I’ve noticed a lot more Confederate flags of all types flying in public now than before the Charleston Shooting. I wonder if this cultural cleansing is beginning to backfire.

Interested in more news from Louisiana? We've got you covered! See More Louisiana News
Previous Article SADOW: Why Not Wait A Little Before Issuing Gay Marriage Licenses?
Next Article KENNEDY: Louisiana Has A Spending Problem, Not A Revenue Problem