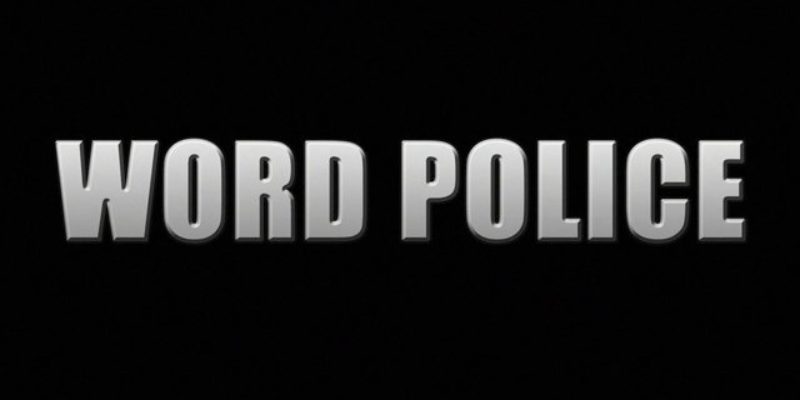 Ever since ‘Bruce’ Jenner became “Caitlyn” Jenner, the word police have been coming out of the woodwork to tell the public what they can and can no longer say.

Of course, the word police have been around for decades, but over the last ten years, they’ve become increasingly absurd. When President Obama ran for office, we were told that words like “urban” and “Chicago” were racist code words.

And now, with Hillary Clinton running for president, we’ve been told that “ambitious,” “calculated,” and “out of touch” are all code words to perpetuate sexism. Naturally, no one buys into this nonsense except liberals and their allies over at MSNBC.

Recently, though, there has been an uproar over normal words; words that you most likely use in your day-to-day life because they are a part of the English language and there’s nothing inherently wrong with them.

But, liberals have decided that for the sake of social justice, you’ve got to get rid of these 12 words in your vocabulary, otherwise, you’re being offensive, which is almost the equivalence of first degree murder.

Here’s that list of words and the reasons why they’re “offensive” via Mashable:

If you’re still using the word “lame,” you might want to give your internal dictionary a serious update.

“Lame” was originally used in reference to people with reduced mobility due to physical disability. The word is now tossed around schoolyards and workplaces everywhere to mean “uncool” and “unappealing.” Even singer-songwriter Ellie Goulding recently included the word in an activist-oriented tweet addressing misogyny in song lyrics.

While adults are guilty of using the term to describe something annoying or unappealing, the word is especially a problem among youth. Stop using it and replace it with more colorful words. And don’t forget to politely correct the person, whether grown man or child, who still thinks this term is perfectly fine. It’s not.

Sure, this is an older term that doesn’t lurk in our language all too often, but it’s definitely not just a vocab issue for out-of-touch, elder generations. Actor Benedict Cumberbatch was rightfully criticized earlier this year for using the term “colored” while advocating for diversity in film during an interview. (No, the irony is not lost.)

The term Cumberbatch (and you) should be using is “people of color,” which is a widely accepted umbrella term that includes any non-white person.

When you have your desk all nice and tidy, you might be tempted to proclaim yourself “so OCD.” But obsessive-compulsive disorder is a mental illness that means so much more than a knack for organization. It means having a lack of control over certain thoughts or activities, so much so that they inhibit daily life.

Though you may think you’re just describing your affinity for Windex, there’s a whole population of people who don’t appreciate you trivializing a major daily obstacle. Try using “particular,” “clean” or “organized” instead.

If you are into Internet lingo, you’ve seen an overuse of “herp derp” or “derp” to address Internet faux pas everywhere. It may seem like a quirky phrase that simplifies saying, “That made no sense,” or “What are you even talking about?” But even before its inception as an Internet meme, it has been consistently used to mock people with intellectual disabilities.

A not-so-quick, yet totally satisfying fix? Go the longer route and say, “Hmm…maybe you’re not getting the point, buddy.” It’s worth the extra characters.

If you’re using the term “crazy” countless times a day, you’re probably in the norm. But that doesn’t mean it’s OK. Terms like “crazy” — or “insane,” for that matter — make light of mental illness in a way no ally wants to support.

The T-word is never OK for a cisgender person to use. Behind it is a history of violence and oppression inflicted on transgender bodies that we need to recognize, and respect those who continue to overcome it.

RuPaul Charles of RuPaul’s Drag Race was schooled on this term back in 2014, but didn’t take the lesson too well. In response to backlash against his copious use of the word “tranny,” RuPaul stated he “earned the right” to use the term because he’s “lived the life.” RuPaul, however, is a drag performer who does not identify as transgender. He doesn’t have the right to reclaim or use a term that isn’t oppressive to him. And neither do you.

“Illegal” can refer to the act of stealing a car, but not in reference to immigrant populations.

It’s pretty simple to explain: Actions are illegal, people are not. The word “illegal” has been applied and abused by those advocating for harsh immigration policies that are undoubtedly racist and xenophobic.

That vending machine cheats you out of a few bucks, and suddenly you’re complaining to everyone that you got “gypped” out of your soda. But pump the breaks on that language for a hot second. “Gypped” isn’t the term you want to use if you want to keep your ally card.

“Gypped” comes from the word “gypsy,” which refers to Romani people who are often characterized unfairly as swindlers. It’s a word that has very real implications for the unequal treatment of Romani people today.

If your new coworker has a name you’ve never heard of before, hold your tongue before telling him or her it’s “exotic.” Using this word ends up exoticizing whomever you’re referring to, usually with nasty racial underpinnings. It’s a major verbal micro-aggression we need to undo.

Suspected to derive from an Italian slang term for waste, the word “ghetto” calls back to concentration camps of World War II. But it has also been used to label the neighborhoods marginalized communities were forced to inhabit due to social and economic disadvantage. Classism and racism run rampant when you call a place, or a person, “ghetto.” And that should make anyone cringe.

Stop using “fat” in a way that shames others — or even yourself. Sure, fat is something we all have and need to survive. But being concerned about “looking fat” in a dress is a way to shame people who might not fit the conventional beauty standards of our society. It’s a way to verbally value thinner people over others.

See, we weren’t making this up.