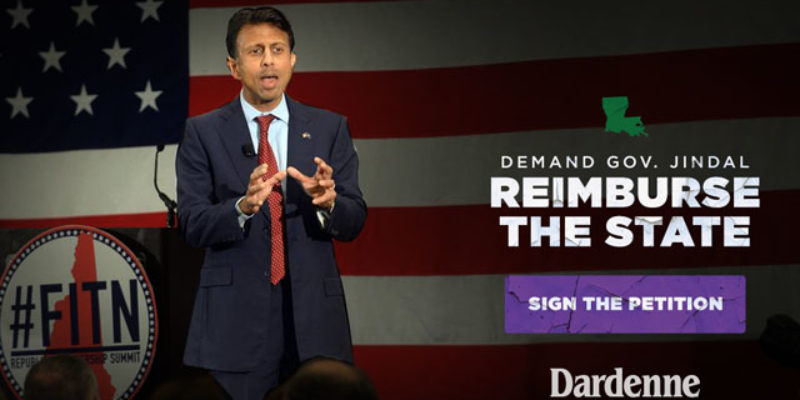 Last week when Lt. Governor and gubernatorial candidate Jay Dardenne began his publicity push targeting the cost current governor Bobby Jindal has racked up by having state police protection as he travels around the country campaigning for the 2016 GOP presidential nomination, I got into a social media fight of sorts with some of Dardenne’s people over whether it was good politics for him to go there.

Kevin Boyd picked up on some of the arguments being made with this post on Thursday, and I was going to add to the discussion with a post of my own until the whole thing was interrupted by that awful mass shooting in the movie theater in Lafayette, which basically cleared everything off the table.

But the subject has come back up, because Dardenne has repeated his push to shame Jindal into coughing up the $2.2 million his police protection has cost the state. This from his campaign website today…

While Louisiana programs are suffering from budget cuts, Governor Bobby Jindal has cost taxpayers nearly a million dollars, this year alone, in out-of-state security costs for his Presidential campaign.
We shouldn’t be footing that bill.

Tell Bobby Jindal to be a true fiscal conservative. Taxpayers shouldn’t be on the hook for a politician’s personal political aspirations.

Did you know that Bobby even VETOED a measure by the state legislature that would’ve put into law that Louisiana’s taxpayers wouldn’t have to pay for out-of-state campaign stops, like Iowa and New Hampshire?

Presidential candidates like Wisconsin Governor Scott Walker are paying their own way by reimbursing the state for out-of-state protective service, so shouldn’t Bobby do the same?

Sign the petition and tell Bobby to pay for his own damn campaign expenses . . .

And there’s a made-for-social-media graphic as well…

The petition, of course, is for one purpose only; that being to grow Dardenne’s campaign email list and hit the petition-signers up for online donations from here until Election Day. That’s what everybody does; Dardenne’s not doing anything untoward here.

I’m not going to defend Jindal blowing through $2 million of taxpayer dollars in his long-shot presidential bid. It does seem excessive, and anybody who wants to take up for that kind of money flying out of the door when Jindal signed bills raising the better part of a billion dollars in new taxes to try to balance a $1.6 billion budget deficit is going to start from a position of weakness. We can all agree on that.

But I hated the politics of this move, and I still do – for all the reasons Kevin outlined last week. Insuring that our governor is not assassinated is a very valid public interest which is served by affording him state police protection, and attacking that protection as a waste of money can be termed as politicizing it. Plus, there are those radio ads running in Louisiana about tourism which star Dardenne, which I don’t have a major problem with but do bear the mark of “dual use technology,” and it’s inevitable somebody with some skin in the game will pick up on that and call Dardenne a hypocrite.

And sure enough, by Friday there was this…

And by yesterday there was this…

Dardenne is going to have people tracking him throughout the campaign, because that’s how we do politics these days. And at this point it’s just easy to post footage of him with state troopers on the web with the inference he’s a hypocrite who’s costing the taxpayer money.

His opponents are going to have a field day with that, and he’s not even attacking them. He’s scoring points against Jindal, who’s not in the race and isn’t particularly relevant to it.

Meanwhile, Ryan Cross, who is Scott Angelle’s campaign manager, decided that his camp would like to play in this sandbox and chose to maximize the political spread of the sand by giving us this quote…

Because, why not hit David Vitter, too?

Here’s the thing. All this is stupid. Jay Dardenne is doing absolutely nothing wrong by having a state police escort as he travels around for whatever purpose. He’s not like Louisiana politicians of old who had state troopers procuring loose women for him, or bootleg corn liquor. And in his political defense he’s not going to race up any $2.2 million by having a state police truck accompany him to fundraisers in places like Lafayette and Alexandria.

Likewise, David Vitter isn’t doing anything wrong with his travel or Congressional mail. You get those advantages when you hold such offices as Dardenne and Vitter hold, and to try to police out the campaign overlap would only serve to hurt the ability of politicians to interact with the public – and we can all agree that the more interaction with the public these guys have the better they’ll be at their jobs.

Can’t blame Angelle’s camp for the point-scoring once this feeding frenzy has begun, though there’s a bit of piling on inherent in the statement.

But here’s the point – and I when I made this on social media to Dardenne’s people on Thursday I was told I’m a “Vitter guy.” To the extent that this would become an actual issue in the governor’s race, there isn’t a way for Dardenne to get a clear win out of it. Because of those YouTubes of him with the state troopers and because of those tourism ads he’s in. Vitter can easily shoot at him on this – I’m told the YouTubes above come from America Rising, which in this cycle is apparently doing things with the Vitter campaign though it’s been a Jindal-affiliated operation in the past, and we already see that Angelle is shooting at Dardenne as well as Vitter. It’s a matter of time before John Bel Edwards mugs for a camera somewhere and makes out like all this taxpayer money spent spiriting rich, uncaring Republicans around didn’t used to happen when Democrats were in control of the state, which will be the ultimate in shameless hypocrisy but Edwards’ voters won’t care.

And by the time it’s over, Dardenne ends up getting more dirt on him than he was able to deliver to Jindal, who again he’s not running against.

I don’t think he’s doing anything wrong even by raising the issue. I just don’t see the value in it. Dardenne looks like he’s pretty consistently showing in 4th place in the current polls. He needs a message that changes the game and puts him clearly above the other candidates. This takes up oxygen without giving him anything like such a message.

I still maintain, though it’s not his style, that Dardenne ought to insert himself into the Lee Circle controversy. Folks are asking him to, and getting letters like these…

This might even be right from a legal standpoint. From a political standpoint it’s a colossal missed opportunity. If the roles were reversed and Mitch Landrieu was the Lt. Governor running for governor, don’t think for a minute he wouldn’t be grandstanding over those monuments and rushing into court somewhere asserting that as the Lt. Governor and thus the head of the culture and tourism efforts in the state he’s within his power to act to stop the bulldozers from knocking down tourist landmarks. Doing that would make him a hero of all the people around the state pissed off by Landrieu’s efforts to destroy those monuments and help create a winning issue for him in the governor’s race. Angelle has no role as a member of the PSC or the LSU Board of Supervisors to stop the destruction of those landmarks, and Vitter as a senator isn’t well poised to claim he can do something. Edwards can’t do it for political purposes, though it’s not good news for him that the majority of his voters happen to be in a small minority of the voters around the state who do want those statues to come down.

If Dardenne were to take that issue up and offer it as a “dual use technology” of sorts, speaking passionately about how important it is to Louisiana to preserve our history both good and bad and perhaps even add to it where we can, it can only help him. Griping about Jindal’s travel budget while getting chewed on for the same sorts of things by the other candidates really can’t.

Interested in more news from Louisiana? We've got you covered! See More Louisiana News
Previous Article MAKIN’ IT RAIN: SUNO Is About To Be Showered With More Public Money
Next Article Lance Harris Threatens The Business Community If They Hold Him Accountable