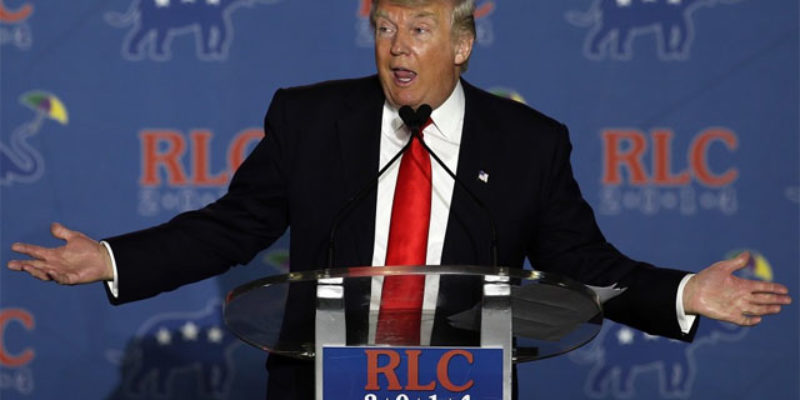 Undocumented Democrat, Hillary Clinton donor, and Vietnam War draft-dodger Donald Trump decided the best path to put himself in the White House was to insult Senator John McCain’s military service and those of POWs in general. It went over about as well as you can expect in a Republican primary.

Here’s what the Combover In Chief said about McCain in Iowa on Saturday:

“I like people who weren’t captured,” Trump said, then told the audience that McCain “graduated last in his class at Annapolis (Naval Academy).”

Nearly all the GOP candidates denounced Trump. But former Texas Governor and U.S. Air Force veteran Rick Perry had the best smackdown of Trump (emphasis theirs).

“Donald Trump should apologize immediately for attacking Senator McCain and all veterans who have protected and served our country. As a veteran and an American, I respect Sen. McCain because he volunteered to serve his country. I cannot say the same of Mr. Trump. His comments have reached a new low in American politics. His attack on veterans make him unfit to be Commander-in-Chief of the U.S. Armed Forces, and he should immediately withdraw from the race for President.”

I agree with Perry. Trump is a clown and carnival barker who is taking attention away from serious candidates, like Perry. Donald Trump needs to be taken as seriously as you would a trained seal with a badger on his head.

But we should not be surprised that Trump decided to attack the military and our veterans. After all, he’s simply saying publicly what many of his fellow Democrats believe privately. Democrats hating the military is not news on its own, it’s just getting attention because it was expressed at a conservative event.

The problem is with guys like Trump is that the GOP Establishment doesn’t have the moral authority to destroy clowns like him. The party has lost touch with its base with compromise after compromise with Obama. Although some of those deals may have been necessary and justified, the way they were enacted have left a bad taste in the mouth of conservatives. Out of that anger, an undocumented Democrat clown like Trump has been able to exploit it and at the same time, harm the entire GOP with his offensive remarks.

Since the GOP Establishment cannot destroy Trump, his “movement”, and his supporters; conservatives have to do it instead. We should not be interested in co-opting Trump’s “movement” for our purposes because it really is idiotic unconservative demagoguery. What needs to happen at the debates Trump will be in is that both conservative and Establishment candidates alike need to concentrate all their fire on Trump and expose him as the fraud he is. Let’s pound Trump on his liberal positions, his donations to the Clinton Foundation, his support for liberal Democrats, and his moronic views on almost everything.

This weekend has proven one thing, it’s time for the Donald Trump circus side show to go back to New York City. The Republican candidates in the first few debates, Establishment and conservative alike, need to drive that message home.