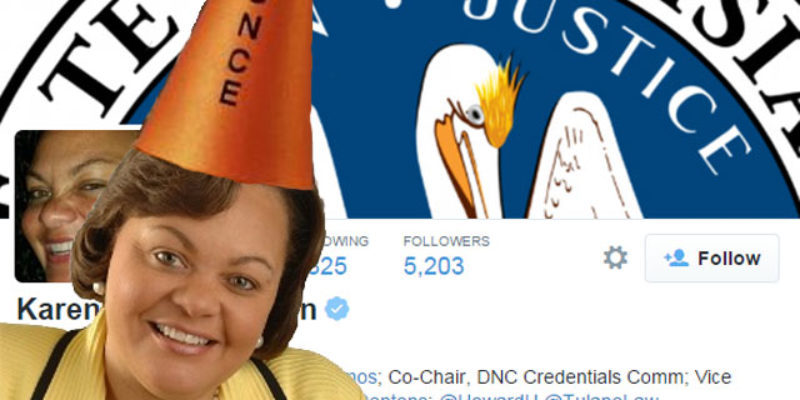 Most of our readers know that the satire/hoax site National Report is a knockoff of The Onion. It contains a lot of stories which didn’t actually happen but are almost plausible depending on your ideas about the people in those stories.

An example of a National Report hoax from a week ago…

The new ban, which some commenters have called “Confederate Flagging”, will reportedly go into effect after the July 4 holiday. Multiple violations will result in account suspensions.

Users who send or receive a post containing the flag or its imagery in any form will receive the following notification: “Content deemed offensive to one or more groups of individuals is blocked from public view. This content may include images or links to images that depict, display, or promote the design and/or content of the Confederate flag in any manner.”

All monitoring and blocking will be controlled by Facebook.

And an example of one from today…

Louisiana Governor and GOP presidential candidate, Piyush “Bobby” Jindal, 44, spoke with Phil Hemmer via satellite on Fox News’ Happening Now this morning to discuss the ever-growing Confederate flag controversy. However, it wasn’t Jindal’s opinion on what states should do about the flag that had people talking afterwords.

While discussing the historic South Carolina Senate vote to have the flag removed from statehouse grounds, Jindal told Hemmer, “Like the same-sex marriage issue, I believe this should be decided on by the states, not the courts. Let the people’s voices be heard. Like many others who hail from the great Creole state, the Confederate flag is a symbol of my heritage, and that heritage has nothing to do with racism or hate.”

It would seem Bobby is once again trying to put mileage between himself and his family’s immigrant past. It’s no secret that Jindal, the first Indian-American governor in US history, is uncomfortable in his own skin. For years now he has tried to distance himself from his Indian roots, and his remarks this morning are just the latest in a long line of bizarre statements and actions.

The obvious clue this is a hoax is “Phil Hemmer.” The Fox News host in question is Bill Hemmer.

And the idea anybody running for president, even on the GOP side, would step in it to such an extent is another  obvious clue.

We absolutely hate National Report at the Hayride, because what they do is a lot of clickbaity crap that’s mostly designed to fool its readers into sharing it on social media and thus look stupid when said crap is exposed as a hoax.

It’s usually the dumber and more gullible of the  folks out there, and many of them simply don’t seem to learn the lesson that nothing from National Report has a shred of truth to it.

Which brings us to this…

LA Gov. Bobby Jindal "The Confederate flag is a symbol of my heritage" | National Report http://t.co/RXn0cg146s

And the stream of tweets which followed was, of course, precisely what you would expect… 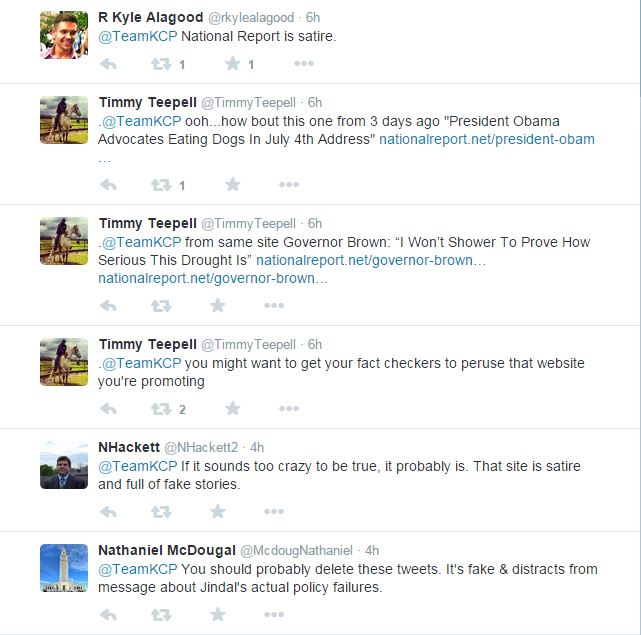 And then this happened…

Yeah! But What's not fake is how the state of LA has been #jindalized and how fiscally irresponsible #PBJ is! https://t.co/shgIPD4SIw

.@TeamKCP @LaDemos Why are you peddling fake stories? Is that how desperate the party has become?

Actually, not desperate at all. You peddle fake stories all the time re #PBJ's record. You wld know! #jindalized https://t.co/NKldaRLkXL

When more friendly Twitterers suggested she might not enjoy living in the hole she was digging for herself, @TeamKCP started spinning even harder…

@TeamKCP You should probably delete these tweets. It's fake & distracts from message about Jindal's actual policy failures.

Glad you are paying attn. let me tell u more truth about #PBJ. He didn't fix ethics, healthcare or education. https://t.co/XlPBW5L789

@TeamKCP If it sounds too crazy to be true, it probably is. That site is satire and full of fake stories.

He lies about himself. #Onward https://t.co/tiIHGNiEQe

@TeamKCP Sure, but tweeting fake stories distracts ppl from seeing that. Only gives him more ammunition to say other side is lying abt him.

I know it's satire for the record. #PBJ shares LIES abt himself daily! He's routinely hypocritical. #Jindalized https://t.co/sTyd8Eh1ez

Then the state GOP showed up to take advantage of Peterson’s faceplant, and she started crying foul…

Newsflash: Democrat Chair Bashes Jindal for Something He Didn't Do http://t.co/aLQuZUpaon

Including an assist from other Democrat trolls…

It is utterly shameful that @LAGOP attacked @TeamKCP for her tweet about a satire news when she knows it is a satire https://t.co/kPG7VOrviY

They have nothing else to do obviously…the presidential campaign is going nowhere fast! https://t.co/8EB3nLYrtt

The whole thing is pretty funny, in a “what a bunch of morons” kind of way.

Whether Peterson was dumb enough to fall for a National Report hoax, as it appears she was, or knew it was a fake story, as she claims, really doesn’t matter. When you already have a major problem with credibility and people already think you’re an assclown who’s running the Louisiana Democrat Party into the pavement, you really can’t afford to give people the impression that you’re getting your news from a minor league version of The Onion.

So regardless whether she knew what she was doing, @TeamKCP still has egg all over her face. Politicians and party chairs who are not assclowns don’t allow themselves to be sucked into stupid fights like this.

That tweet should have been deleted. The guess is it will be shortly, in all probability, and then we’ll have to replace the embedded tweets in this post with the screenshots we took of them.

UPDATE: Oh, and in case you actually believe @TeamKCP when she says she knew it was satire, here’s Stephen Handwerk, her executive director at the Democrat Party, with his initial reaction. 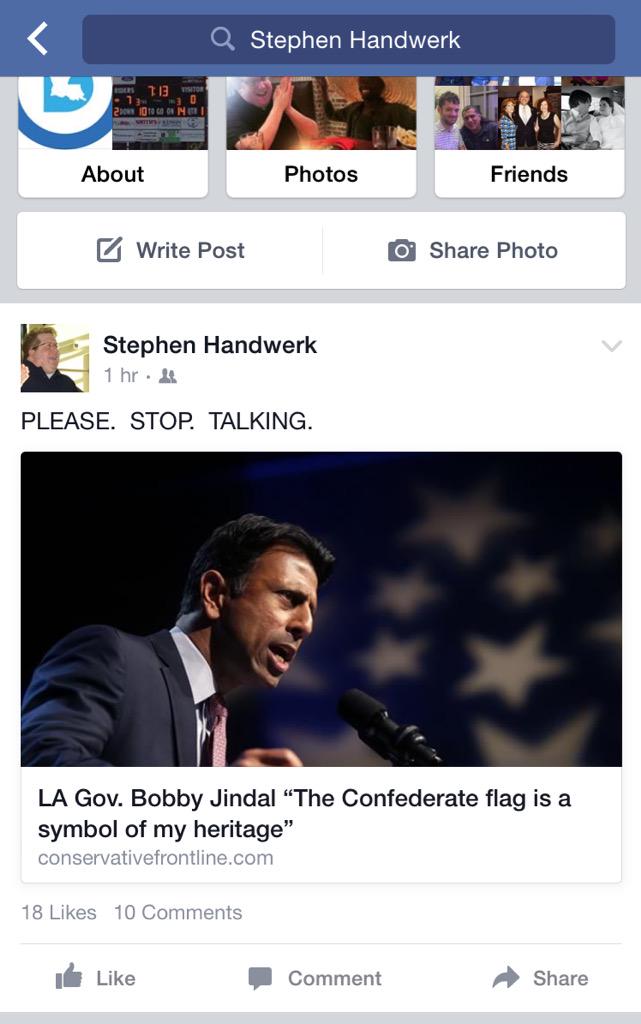 These are not smart people.

Interested in more news from Louisiana? We've got you covered! See More Louisiana News
Previous Article Guess Where Kevin Is At This Week?
Next Article And Tonight, We May Have Found A Dumber Democrat Than Karen Carter Peterson