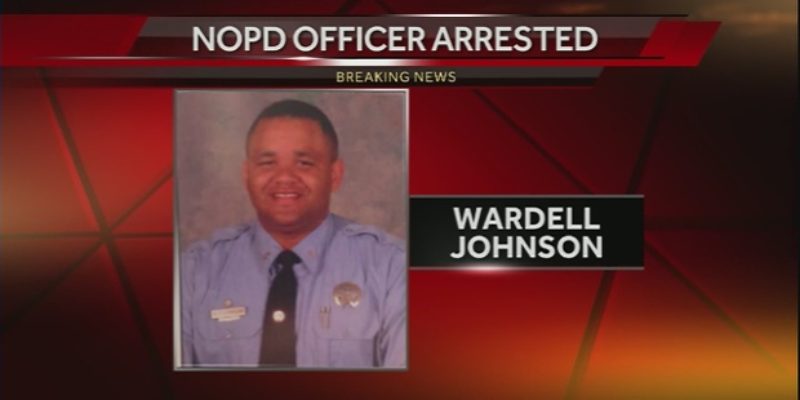 The New Orleans Police Department (NOPD) has arrested one of their own for allegedly tampering with evidence and lying to investigators on at least two occasions in the case of alleged cop-killer Travis Boys’ who is accused of killing NOPD Officer Daryle Holloway last month.

Officer Wardell Johnson is being accused of stealing and getting rid of a pack of .40-caliber bullets that he obtained on June 20, when he and another officer arrested Travis Boys during a domestic disturbance incident. Boys, that night, allegedly fired a shot at his wife using a .40-caliber gun.

From body camera footage off Johnson, investigators said Boys’ wife is seen giving Johnson a box of .40-caliber bullets, the ones he did not report to NOPD.

“Officer Johnson is seen twirling the box of bullets while he talks to another officer relative to a spent casing that was eventually confiscated from the scene,” the warrant said.

Johnson and the other officer later transported Boys to the 5th District NOPD station. From there, Officer Holloway volunteered to take Boys to the Orleans Parish Prison’s central lockup.

It was this transport of Boys that left Holloway dead. Boys apparently got a hold of a .40-caliber gun and shot Holloway in the right side of his torso. Boys, according to footage from Holloway’s body camera, was then seen fleeing the police car and taking off on foot.

According to investigators, when Johnson was brought in for questioning about his alleged withholding of evidence, Johnson said he did not know where the box of bullets were. He then told police that the box could be in his bag.

When Johnson left the interview with police halfway through, detectives followed him and caught him removing a white box from the trunk of his car and sticking it in his pants pocket.

After Johnson returned to the interview with police, he denied knowing where the box of bullets were, even after police admitted that they knew he had them on his possession. Johnson, though, said he never stopped his car and removed them from his trunk.

Then, after talking with his attorney, Johnson told investigators that he had thrown the box of bullets towards a nearby canal in the area. Johnson did not say why he tried to discard evidence.

NOPD has yet to recover the box of bullets Johnson kept for 16 days.

Interested in more news from Louisiana? We've got you covered! See More Louisiana News
Previous Article Low Popahirum, July 7, 2015
Next Article The Map That Perfectly Depicts Just How Much Of A Fiscal Mess Liberal States Are In