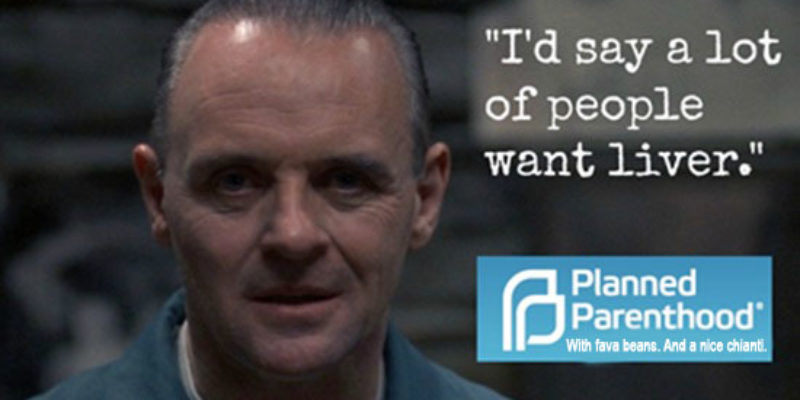 This thing is rolling out a lot like the Breitbart-James O’Keefe ACORN sting did – light off one bomb, watch the intended victim run screaming to contain the damage, and then light off another bomb. Rinse and repeat.

And the second version of the Planned Parenthood body-parts sale sting is a bit more intense than the first one. Whereas the first video focused on a Planned Parenthood muckety-muck who discussed performing abortions so as to preserve organs – people really like those livers! – for de facto sale to medical research companies, this one contains a meeting with a second executive who commences haggling over price of those parts, and then proceeds to discuss changing abortion procedures for younger fetuses so as to preserve “tissue” for sale.

She makes a pro-forma attempt to deny that Planned Parenthood is actually selling body parts, but it’s difficult for anyone to actually believe that denial. Not when you have a variable price and she’s discussing volume and how to increase it. That’s a functioning sales negotiation, and there is no way to deny it.

This in direct contradiction of Planned Parenthood president Cecile Richards’ denial, shown at the beginning of the video, that it sells body parts.

The video was shot on Feb. 6. That it’s being released today, with so much of a lag, would indicate there are more installments to come. Perhaps many more.

When the O’Keefe ACORN videos tumbled out of the internet, they became an existential problem for that organization and ultimately caused it to fall apart after Congress pulled its funding.

It wouldn’t be a surprise, depending on how much worse these videos get, to see something similar happen to Planned Parenthood.