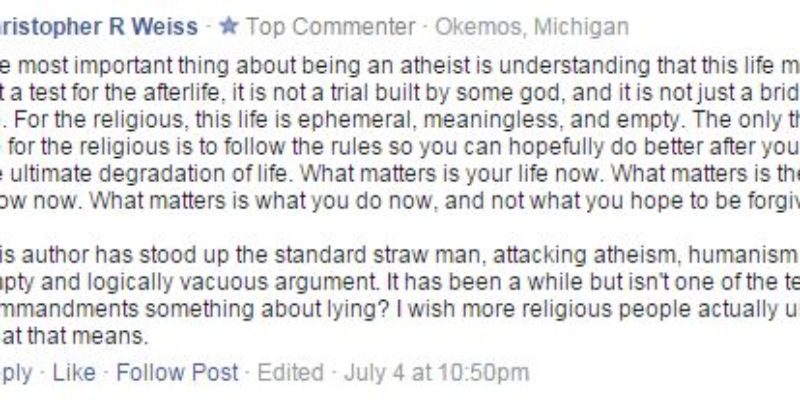 The above is a screen capture of a comment concerning my article “God is…” as it was published by The Hayride. It’s a pleasure to hear from Mr. Weiss whether he agrees with me or not. At least he’s reading.  I figured he’s been kind enough to engage those thoughts I’d respectfully do the same for him.

First: I’m glad that this life matters to Atheists. It should. I agree this life isn’t a test for participation in the afterlife as he suggests. But, I also suggest some of those are his thoughts: not mine. I think judgment is a fact and is actually proven by the words chosen by Mr. Weiss to judge not only my belief system but to challenge me and others who don’t see it his way.

Life isn’t ephemeral or short-lived. It’s an eternity. And I agree this life isn’t a “bridge to a better life”. The concept of a “bridge to a better life” is erroneous. In fact it points out the shallow depths of man’s thinking that allows him to believe he must enact some forms of critical introspection to better understand what he’ll probably never really grasp at all. But, the statement denoting a “bridge” indicates the writer’s belief he stands apart, confined and removed from the realities of the universe he must construct a link between himself and his personal, omnipotent intellect.

I prefer to think of life as a fabric woven over time into a cloth covers me in during times of trouble and tribulation. Life isn’t meaningless or empty. It’s full of hope and the brilliance of endeavor. It’s full of wisdom to be accumulated and stored; and then to be passed outward to our children and theirs in time. Nobody that believes in a deity can be said to be locked into today and without hope. What would you call the creation of life between two loving members of the opposite sex? How can anybody claim abandonment of hope and the expression of it as “ephemeral, meaningless and empty”. We search for immortality in our young affecting our history as warning and teaching for the future.

Mr. Weiss seems to be of the opinion we people who believe in God and the Afterlife are stagnating in our pool best described as more a swamp of sentimentality than a font of spiritual knowledge. To him we kneel passively, our eyes tightly shut and implore deities suffering the deafness of the ages and in refusal to aid us in our need. In reality we’re kneeling before what we know is greater, no matter how mysterious it might be. We uplift out voices together to create the resonant possibility it will direct a universal truth to favor us and lead us to make intelligent and moral decisions. These decisions would be made in consideration of the logic of our God-given intellect and in response to our knowledge of what was taught us by our elders.

And it was those elders taught us God does exist. James Michener wrote a book called THE SOURCE, published in 1965. It told of the development of the Jewish people from a position in history where man, no more than a bipedal ruffian seeking to understand the WHY? of anything and accepting the development of a higher power to accommodate the question if he didn’t accomplish the action ; who did? That was always interesting to me.

Because of the action of thinking, man moved to the action of believing. He moved to understanding his own fallibility and weakness in the natural order of life as he knew it. He developed fear of the unknown, but he also developed the faith-based courage to step beyond his fears and challenge the potential end results could be changed by his participation in the effort. If belief made him and us stronger, then what’s the problem Mr. Weiss?

I accept you have no belief in God. And, I accept the fact you want to state your case. But, I have never (and probably never will) understand why it’s so damned important to you that I see it your way. I wonder at the fact you seem so threatened by the fact I (and billions more like me) have faith. It seems to bother you we are a part of something greater than our individual selves. You seem to be the wee small voice and mind feeling excluded because of your lack of belief in something greater than yourself.

I think it’s your mind is closed and tunneled into a narrow band of thought leading you to believe in nothing beyond your personal accomplishments, your personal thought processes and your bigotry against those not seeing it your way.

“This author has stood up the standard straw man, attacking atheism, humanism, etc. It is an empty and logically vacuous argument. It has been a while but isn’t one of the ten commandments something about lying? I wish more religious people actually understood what that means.”

My final words are in contest to this type of thought you espouse. It’s not a “straw man” to present atheism and humanism as classifications of schools of thought and self-serving academic philosophy. It is no more logically vacuous to argue for the higher power I believe exists than to listen to the thoughts you bandy about. It doesn’t make me a liar to think in controversy to your thoughts.

So; I ask the second biggest question after “who lit the fuze?”  Just WHY? is it so damned important you get your way and destroy the hopes of people never did anything to you?

When you can answer that WHY?; look me up. I’ll ask the question again.

Interested in more national news? We've got you covered! See More National News
Previous Article AFTERBURNER: The Sordid History Of The Democrat Party
Next Article (UPDATED) If You Want To Hide Something From Wilson Fields, Put It In A Law Book…