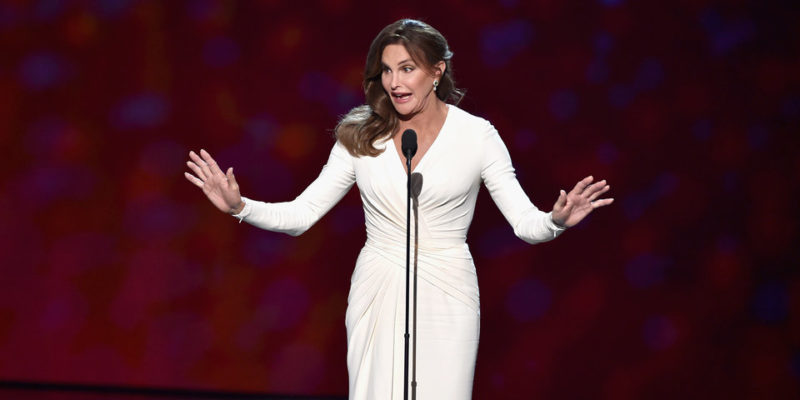 Following the famous Olympian athlete’s transition into becoming a woman, which was praised and heralded by the media for weeks upon weeks last month, ESPN announced that Jenner would be receiving a courage award at the 2015 ESPY’s.

Last night, when Jenner accepted the awards at the ESPY’s in a Versace gown, she essentially stated the obvious: Transgender people deserve respect.

Jenner’s speech was nothing out of the ordinary. The public and the media expected her to speak about transgenderism and transgender issues. Nothing really new to hear or see that we did not already hear from Jenner’s Diane Sawyer interview back in late May.

Anecdote: Jenner kissed a lot of Diane Sawyer butt last night, praising her as a phenomenal and great friend. Then today, it was reported that the Diane Sawyer plug in Jenner’s speech was a total set up. Jenner’s publicists apparent demanded the ESPY award and in return, Sawyer would get the interview.

Anyway, Jenner’s speech was not anything new. But, that has not stopped the media from going absolutely gaga over Jenner, fan-girling like a 16 year-old girl at a Taylor Swift concert.

At the Huffington Post, Jenner is declared as “taking the ESPY’s by storm.”

Jenner spoke about her own personal experience so far as a transgender woman. But she also dedicated a significant percentage of her speech to a thoughtful and touching discussion of the vast number of issues facing the larger transgender community.

Also, the New York Times has placed Jenner on the front page of their website, along with an op-ed on transgenderism. 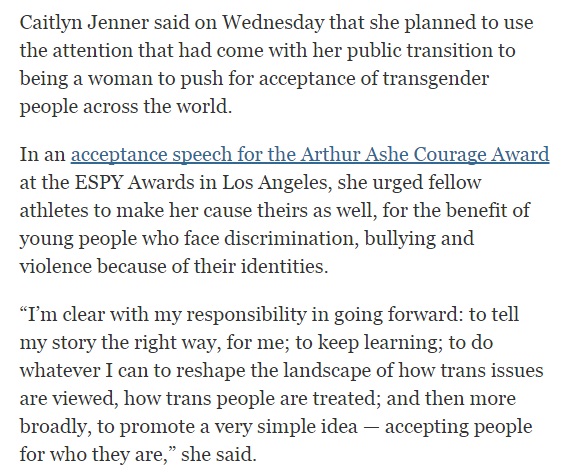 In her first major appearance since coming out as transgender, Caitlyn Jenner took the stage at the ESPY Awards in Los Angeles to a standing ovation. And in front of some of the world’s biggest athletes and celebrities, she told the world what the transgender community needs.

“Trans people deserve something vital: They deserve your respect,” Jenner said, as NBC reported. “If you want to call me names, make jokes, doubt my intentions, go ahead, because the reality is, I can take it,” she said. “But for the thousands of kids out there, coming to terms with being true to who they are, they shouldn’t have to take it.”

While Jenner is front and center on almost every major news website today, the Planned Parenthood scandal, in which a top official of the organization is caught on video discussing the sale of unborn babies’ body parts, is entirely absent.

Naturally, multiple media outlets published Planned Parenthood’s defensive statements in regards to the footage of the abortion doctor as a straight news story, not even attempting to investigate or poke holes in the abortion giant’s statements.

Though Caitlyn Jenner and Planned Parenthood do not have much in common, they are both figures for larger social issues. And the fact is, the media would rather be a prissy cheerleader for a transgender athlete, than actually getting to the bottom of a massive abortion scandal.

For the media, transgenderism is a narrative about acceptance, love and leftist thought.

Planned Parenthood, on the other hand, is a sort of holy grail for the media. Therefore, when the organization is exposed for deplorable and illegal business practices, the media will stay silent as long as they can until the public forgets about the issue.

When it is all said and done, nonetheless, Caitlyn Jenner will be tucked away in her million-dollar Malibu home while unborn children continue to be destroyed by Planned Parenthood.

That is not something the media wants to talk about. But, that’s what we are here for.

Interested in more national news? We've got you covered! See More National News
Previous Article LABI’s 2015 Scorecard Is Out And It Has Bad News For Numerous Incumbent Legislators
Next Article To Hell With “Caitlyn” Jenner, And To Hell With Disney