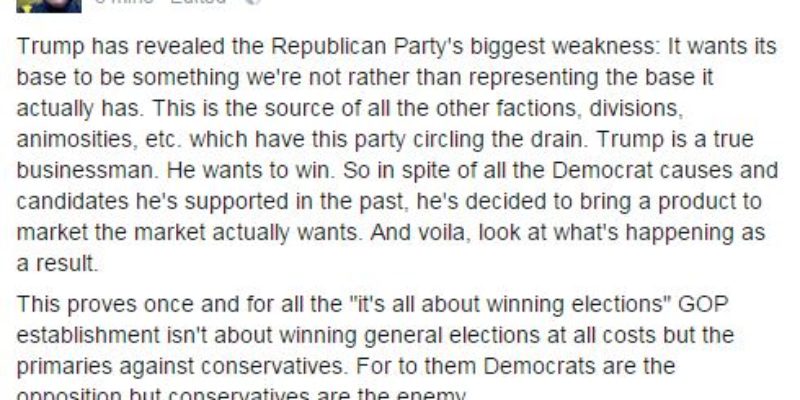 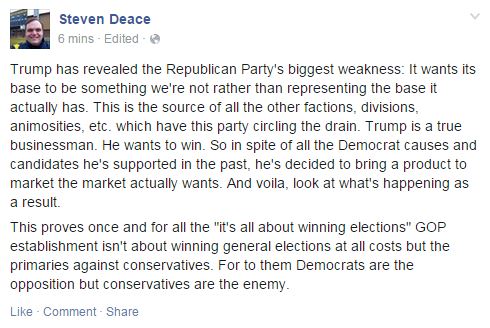 I don’t know if any cons actually support Trump. They’re just frustrated that it takes Trump to tell the forbidden truth. @Blaknsam

Look, it’s patently obvious at this point that Donald Trump isn’t going to be the GOP nominee. Nobody who is as undisciplined as Trump is in starting fights away from the task at hand – namely, his presidential bid – can survive the test of a long primary battle. Every day Trump puts out statements trashing ESPN and NASCAR, or Univision, or even Jonah Goldberg of Fox News and National Review fame, is a day he’s wasting when he could be attracting voters.

And no, he’s not actually attracting voters by getting in tinkling matches with Macy’s. He’s getting attention, and he’s entertaining people, but he’s not getting votes.

Proof of this can be found in the polls. As Jim Geraghty writes in today’s Morning Jolt from National Review…

I realize that if you’re a Trump fan right now, energized by his in-your-face combativeness with the media and anyone who disagrees with him, I’m unlikely to change your mind on his qualities as a GOP presidential candidate.

But let’s take Stephen Covey’s advice to “begin with the end in mind” — presumably that is conservative governance — and recognize that to achieve it, we need a Republican president. And as much as Trump may be rising in the polls of the GOP primary, let’s take a look at his numbers head-to-head against Hillary Clinton:

Could those numbers change? Sure. But Trump has pretty high name-recognition as is, so the usual explanation that the gap “just reflects that fewer Americans have heard of him” doesn’t fit. A rational Trump fan would at least acknowledge that beginning with a 17 to 24 point deficit represents a major challenge, and recognize that electing him would be a Herculean task.

Support for Trump is support for his style, not the candidate himself.

As Deace says, and as Schlichter echoes, the electorate – particularly on the conservative side – wants somebody who will cut through the usual political spin and speak plainly. That Trump is willing to do that, and that he’s willing to double down when the corporate, media and political elite attempt to punish him, excites them. And for good reason.

For example, the GOP’s base voters want something done about putting a stop to illegal immigration. Period. They’re not interested in a “comprehensive” solution to immigration as a whole, because they don’t trust the political class to perform complex, “comprehensive” tasks. They know that “comprehensive” solutions in Washington involve a lot of bullshit giveaways and unrelated agendas and more wasted money on programs that don’t solve problems. They don’t want any of that. What they want is a wall at the border which stops the illegals from getting into the country, and they want the government to put an end to the lawlessness that allows Kate Steinle to get shot dead at the San Francisco pier.

And they know damn well that there are tons of criminal illegals here, and that the federal government has done a crappy job of putting a stop to that.

They also know that it’s harder for their kids to get summer jobs or their first job because all of those bottom-rung-on-the-ladder positions, or at least too many of them, are being taken by illegals. And it pisses them off. It pisses them off even more when they’re told they’re racists or xenophobes for having these concerns.

That people could come here illegally and latch on to the welfare system, or fill up the public schools with kids who can’t speak English and thus force their tax dollars to be spent on remedial education when American kids are getting substandard education in those schools as it is, only inflames the problem.

And when they’re told they have to accept amnesty for the illegals in order to get the border closed to millions more of them, which is what the political class in this country has been telling them for a decade or more, and they’re fully aware that we’ve seen this movie before and it didn’t end well, their anger at and resentment of the political class far outstrips any animus they might have for the illegals themselves. This is about hatred of politicians and the politically-correct corporate elite which is in league with them to force open the border. It only makes things worse that these folks perceive the whole thing to be about getting cheap labor for corporations who are engaged in lots of other crony-capitalist practices already.

So along comes Trump, and he makes the worst possible argument on the immigration issue and starts a huge fight over it. What Trump said was thoroughly boorish and it needlessly dumped all over a bunch of people who have come here in an effort to honestly better themselves, and it made the Republican Party look like racists because he basically accused most of the immigrants coming from Mexico of being criminals and drug addicts. And oh, by the way, he assumes some of them are good people.

And yet it worked for him anyway. Why? Because for the first time a lot of these Republican voters, who are mostly white but by no means universally so, finally recognize that somebody has come along with a willingness to put Americans, and particularly working-class Americans, first without trying to pander to this special interest or that.

They’re flocking to Trump because he was willing to make the argument. As we posted earlier this week, Bill O’Reilly made a far better articulation of the same argument, and properly made it’s a convincing one. Nothing on immigration is more important than controlling that border and preventing people from getting into the country who don’t belong here. When that problem is solved we can begin unwinding the rest of the immigration issue, piece by piece. But the appeal, and the method, resonates.

It’s a rejection of status quo politics much more than it is an endorsement of Trump. Trump is unelectable, even in the GOP primaries. Everybody knows this. What wins is the serious candidate who can pick up just enough of his style, with a dash of combativeness and a helping of “F You” to the elites in New York, Washington and L.A., to carry it forward.

There is an almost revolutionary mood out there. The public, and particularly the Republican public, has had enough of the Obama administration. And they’ve also had enough of the flaccid and craven GOP leadership on Capitol Hill, which has failed at every turn to stop Obama and his people from enacting policy atrocities. They don’t want a candidate who will be the presidential version of Mitch McConnell or John Boehner, and when they see the “respectable” GOP candidates equivocating on an issue like immigration, or attacking Trump from a politically correct perspective for their own personal benefit, they groan and cross said “respectable” politicians off the list.

It’s time for some of these people to listen to what Deace is saying and actually appeal to the GOP base on its terms. It’s time for these candidates to start hating Washington and the elites the way the base does. The first serious one to establish that persona is the one who will walk away with the people Trump currently claims in the polls, and the nomination.