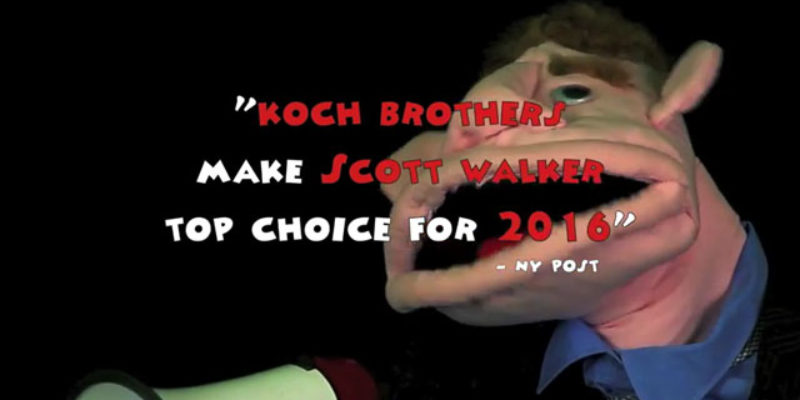 We’ve mentioned The Agenda Project before, and talked about how they’re such an amateur, assclown outfit for the Democrat Party that one almost gets the impression they’re a GOP organization in disguise, stealing cash from left-wing donors and using the proceeds to create messaging that actually helps the enemy.

They got one score with that “throw Granny off the cliff” ad about Medicare cuts a few years ago, though it’s arguable what kind of hit that actually was. Since then? Slim pickins.

Well now, they’re back. This is the ad they’re debuting against Scott Walker, who officially gets into the GOP race today.

Why would you put that out there now? Exactly what votes would it move?

If anything, the ad plays into Walker’s chief calling card in the GOP race – namely, that he’s the guy in the field the Democrats and their Hard Left constituency groups hate more than anybody because of what he’s been able to do to their sweetheart deals back home in Wisconsin.

Right now, Donald Trump is getting all the oxygen in the Republican race but it won’t last because the more the GOP’s primary voters look at him and who he’s given money to, and what he’s said about issues those voters care about, the less interesting he’s going to be.

But somebody else in the Republican field, and we’d bet on Ted Cruz or Walker ultimately being that guy, is going to appropriate Trump’s style and ride it straight into the White House.

And this ad show that if it’s Walker, the Left had better hope he self-destructs – because if this is all they have, they can’t beat him.

UPDATE: But he could self-destruct, particularly if his staffers are allowed to screw up the campaign. Nobody is interested in hearing this…

Congratulations on your official presidential announcement, Wisconsin Governor Scott Walker. Now you get to spend part of your day explaining away something one of your advisers said.

Speaking — wait for it — anonymously to National Journal’s Tim Alberta, a Walker adviser tried to calm fears the candidate was moving too far to the right in order to win the Iowa caucus by intimating that positions taken this early on are contingent.

“You start in Iowa and lock up conservatives, because if you don’t do that, none of the rest matters,” the adviser said. “It’s much easier to move from being a conservative to being a middle-of-the-road moderate later on.”