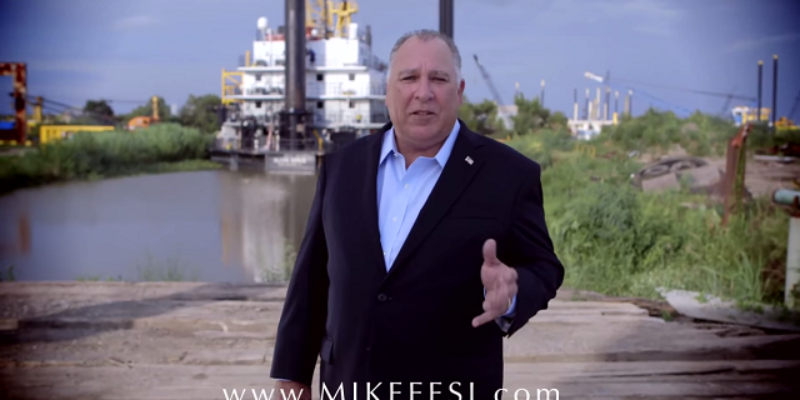 This time, it’s State Sen. Norby Chabert (R-Houma) who is getting the news. Unlike some of the other challengers we’ve profiled, this one going up against Chabert is going to be pretty tough to beat.

Meet Mike Fesi, Sr. He’s a respected oil man down in the River Parishes and he isn’t too pleased with his representation in Baton Rouge. He’s entering the race today and it’s pretty clear he plans on winning it.

HOUMA, LA – Mike Fesi, Sr. has announced that he will run for Senate in District 20, which covers parts of Terrebonne and Lafourche Parishes. Fesi works in the oil and gas industry and owns Pipeline Construction and Maintenance, Inc. He has launched his campaign by writing a check for $319,000.00 to his own campaign fund.

PCM employs three hundred workers and has created fifty new jobs since January of this year despite the downturn in oil prices. PCM services over thirty of the largest energy producers in the world. Fesi prides himself in bringing out-of-state dollars home to Louisiana, infusing millions of dollars into our Louisiana economy and providing high paying jobs to hundreds of South Louisiana families.

“Our current legislature balanced the budget on the backs of business and industry and, worst of all, it was only a temporary fix. Economists currently project that we will be facing a $1 billion deficit again for the fiscal year beginning July 1, 2016,” said Fesi. “Our state budget faces problems that are systemic. We need innovative solutions that address the foundational problems. We need to balance the state budget by cutting wasteful spending without raising taxes”.

A graduate of Terrebonne High School in 1977, Mike Fesi is a lifetime resident of Terrebonne Parish. He and his wife, Carla Donaldson Fesi, have been married for 35 years. They have four grown children and eight beautiful grandchildren – four boys and four girls.

Fesi also has an intro video that’s very well done talking about his company and his issues.

Before the session, Chabert was presumed to be unbeatable. He’s not the only “unbeatable” lege drawing serious opposition this cycle.

In metro Baton Rouge, nearly every Republican who supported the tax increases is drawing an opponent. Steve Carter is drawing mediocre opposition, but even so he’ll have a fight on his hands. Carter is not only drawing opposition from anti-tax fiscal conservatives, the anti-Common Core bunch would love to have his scalp as well.

Businessman Scott McKnight is running against Dan Claitor and that is expected to be a real race. Darrell Ourso is facing two serious challengers and will likely lose to one of them.

Outside of Baton Rouge, other leges who were supporters of the tax increases are having a tough time. Jim Fannin is looking increasingly beatable in his attempt to switch from the House to the Senate.

What we have is conservatives in Louisiana have had enough of this legislature. They balanced the budget on the backs of productive Louisianians and their businesses. Now they’re looking for payback. We think many legislators are going to get what’s coming to them in October and November and we expect more challengers to emerge across the state in the next month or so before qualifying in September.

Corrected to remove a line where I wrote LABI was supporting Steve Carter’s opponent. That’s not true. In fact LABI is endorsing Carter’s reelection.