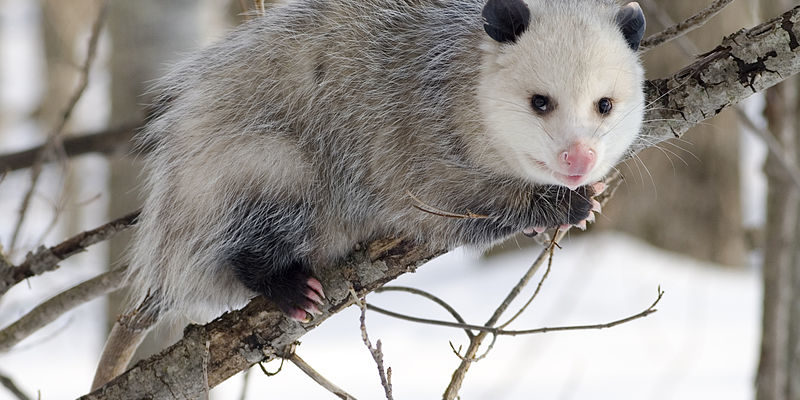 Do you ever stop and think about opossums?  Why do they have pouches?  Did Granny really cook them and hold a Possum Day Possum Parade on the Beverly Hillbillies?  Do they really play possum?  According to the fount of internet knowledge, Wikipedia, the answer to the last question is indeed true:

When threatened or harmed, they will “play possum”, mimicking the appearance and smell of a sick or dead animal. This physiological response is involuntary (like fainting), rather than a conscious act. In the case of baby opossums, however, the brain does not always react this way at the appropriate moment, and therefore they often fail to “play dead” when threatened. When an opossum is “playing possum”, the animal’s lips are drawn back, the teeth are bared, saliva foams around the mouth, the eyes close or half-close, and a foul-smelling fluid is secreted from the anal glands. The stiff, curled form can be prodded, turned over, and even carried away without reaction. The animal will typically regain consciousness after a period of between 40 minutes and 4 hours, a process that begins with slight twitching of the ears.

We have here a case of The Great State of Louisiana imitating our beloved marsupial.  Observe:

The Didelphimorphia-like case of The Fund for Louisiana’s Future v. Louisiana Board of Ethics, decided over a year ago by Judge Martin Feldman of the U.S. District Court in New Orleans, was about whether Louisiana, through its Board of Ethics, could enforce a statute that put a cap on how much a person could give to a political action committee independent of any campaign or candidate. In short, the U.S. Supreme Court has held that contributing to a campaign or political action committee is speech protected by the First Amendment. As protected speech, the government can only restrict such a contribution if the government regulation or law is narrowly tailored to achieve a compelling governmental interest. The Supreme Court has also held that the only governmental interest compelling enough to justify restriction of contributions is the government’s interest in preventing corruption. If you’re giving to a candidate, therefore, the government can restrict how much you can give in order to keep you from corrupting the candidate. On the other hand, if you’re giving to a committee that’s independent from any candidate, the Supreme Court has held that, due to its independence, giving to such a committee does not corrupt a candidate. Thus the government cannot restrict your giving to independent expenditure committees.

There’s much debate as to the correctness of the Supreme Court’s conclusions, but suffice it to say that is their current line of thinking. Thus, it was no surprise when Judge Feldman held that Louisiana’s law, which placed a cap on how much a person or entity could donate to an independent political action committee over a four-year period, was unconstitutional.  That was in May of 2014.

Fast forward to last week when Lieutenant Governor Jay Dardenne blasted the Fund for receiving legal fees from the state as a result of its successful constitutional challenge. Under the law of the federals, a party successful in challenging the constitutionality of a state statute (as the Fund was) is entitled to have their attorney’s fees reimbursed. In this case, the Fund’s attorneys received north of $69,000, which Dardenne called “shameful:” “For Senator Vitter to force the state of Louisiana to pay $70,000 in legal fees to his campaign operation is shameful. I’m not sure who is worse: Gov. Jindal sticking taxpayers with the bill while running for President or Sen. Vitter sticking taxpayers with the bill so he can raise unlimited amounts of money from out-of-state special interests.”

Putting aside the question of whether the funds were earned and whether or not it was proper to attribute the Fund’s conduct to Senator Vitter (by definition, the Fund must be independent from his campaign), this could have all been avoided, and a cool $69k saved, had the state taken the hint several years ago.

Instead, the State played possum.  And lost.

It turns out that way back in 2011, your friendly legal analyst, assisted by the great Tyler Martinez, then of FTJ and now of the Center for Competitive Politics,  sent a letter to the Louisiana Ethics Administration, arguing the same thing that the Fund’s lawyers recently argued, namely that the cap on contributions to independent expenditure committees was unconstitutional: 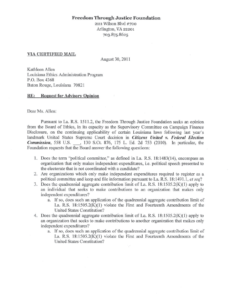 The Ethics Board sent back a very friendly reply telling your opossum loving attorney that he had no standing to raise the question. In other words, it was none of my business: 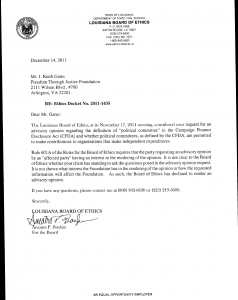 The point is not so much “I told you so,” but “why didn’t you fix this problem when you knew about it four years ago?” The State has bright lawyers. Surely one of them looked at this and thought “you know, that Gates boy is right: this law is clearly unconstitutional. Let’s go tell the Legislature to change it.”

If you don’t view the state’s lawyers in the same light I do, then there is this post from our friend Jeff Sadow warning the state of the correctness of our argument and the unconstitutionality of the statute.  Jeff noted, quite correctly it turned out, that an enterprising group could sue and bring an end to the statute: “So the foundation seems likely to win, given enough time and resources assuming the state would fight the matter.”  But why not just change the law, Jeff thought (as did the rest of us):

But why go through all of this when a much simpler solution exists – just throw out any limits on donations directly to a state or local campaign by any individual who is a citizen of the U.S., but mandating reporting of every single contribution? Because right now, the structure serves more to obscure than to provide clarity as the limits can be gotten around.

AND, there was an article at the time in The Advocate by Marsha Shuler discussing the matter (the link has since been taken down).

Did the Ethics Board agree with your humble servant? Negative.

Did the Legislature change the law? Nope.

Did anybody do anything to fix the law? Afraid not.

What did they do?  They played possum and hoped the matter would simply go away.  A search of the Legislature’s 2012 through 2015 regular sessions revealed no bill was filed to fix the matter and the law remained in place until the Fund took the state to court to have it declared unconstitutional.

Thus, instead of blaming the Fund’s lawyers for collecting fees due them under federal law, we ought to aim our rhetorical cannons at whoever dropped the ball in Baton Rouge and cost the state $69,000.  After all, the state had ample warning from multiple sources as early as 2011.  Had the state taken the hint way back then, it would be $69k richer.

In short, the state played possum with the constitution, and the state lost.  And now taxpayers are $69,000 poorer.

Interested in more national news? We've got you covered! See More National News
Previous Article Low Popahirum, August 4, 2015
Next Article Another Tax Hiking Legislator Is Waking Up This Morning And Finding Out They Have An Opponent