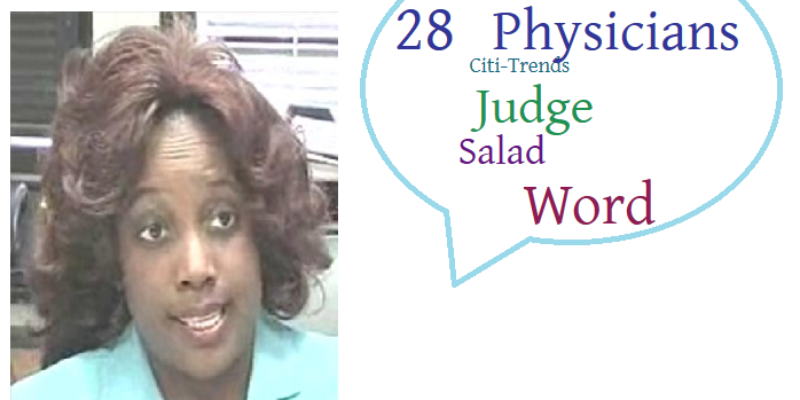 So if the Supreme Court of Louisiana removed you from the bench, finding that you had seen 28 different physicians from whom you had received narcotic pain prescriptions, that you had tendency to speak in “word salad” and that your “excessive use of prescription drugs over a lengthy period impaired [your] judgment on the bench on occasion,” what are you to do?

Of course.  You run for District Attorney.

Enter Laleshia Walker Alford, former Judge of the Shreveport City Court, and current candidate for District Attorney in Caddo Parish who, as KTBS pointed out in covering her announcement, “will have to answer questions about why she is no longer on the bench.”

In 2008, the Louisiana Supreme Court removed Alford from the bench after they found, among other things, that she spoke in word salad, put a juvenile in adult lockup, and sentenced another defendant to go to Citi-Trends.

No, I’m not making this up.  Read the full opinion here.

At the hearing before the Judiciary Commission on Alford’s conduct, Dr. Lonald Daughtry of Xavier University, an expert in psychopharmacology testified that Alford was prone to speak in word salad:

Dr. Daughtry defined a word salad as “a string of certain words together that don’t make sense and kind of like a free association,” or “gibberish.”  For example, in August 2005, Judge Alford sentenced a defendant to do a report on why guns are so dangerous in America, then stated, “And the possession of dry or dealing in what friends firearms I’m sorry quite obsolete.  So I’m not sure what that one is about position of dealing okay this is some kind of possession case which should have gone to the district so disregard the possession case it is at a district okay.  You free to go.”  At the hearing on interim disqualification, Judge Alford could offer no explanation for this statement, but she denied that she was speaking in a “word salad.”

In one notable instance, Judge Alford sentenced a defendant for driving infractions by giving him 90 days to go to Citi Trends, a Shreveport clothing store, “and pick out what you want.” When asked about this matter, Judge Alford agreed the sentence had nothing to do with the case before her,but she claimed it reflected nothing other than that she “made a mistake” and is “human and infallible [sic].”

Chief Judge of the Shreveport City Court, Charles W. “Bill” Kelly, IV, when asked to rate how disruptive Alford’s behavior was on a scale from 1 to 10 (with 1 being the least disruptive and 10 being the most disruptive), replied, “. . . I’d say a 10.  She was highly disruptive, not only to the fair administration of the court but the morale and welfare among the court staff.  I mean, it permeated everything.”

I know what you’re thinking: surely there’s a good reason for Alford’s conduct.  Of course there is: white deputies.

Judge Alford further testified that many of her problems at the Shreveport City Court were the result of a hostile work environment.  She referred to other judges not understanding the health problems of a woman and/or the difficulties of a single working mother.  Further, Judge Alford alluded to problems with “white deputies.”

So we have a person who has problems with narcotic pain medicine, disrupted her own bench, and blamed it on “white deputies.”  And she wants to be District Attorney.

This is why we can’t have nice things.