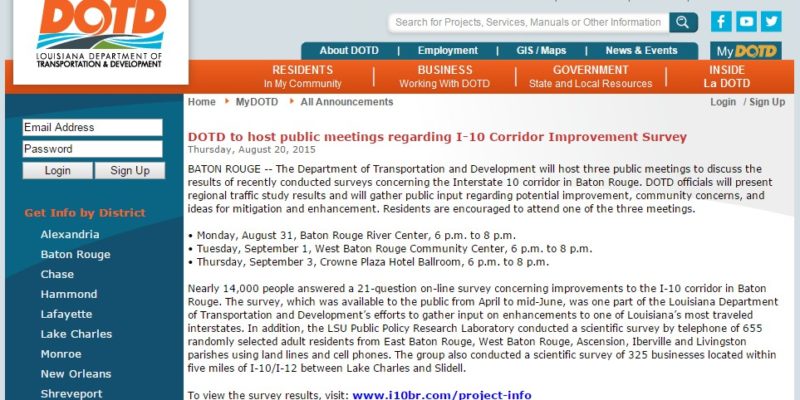 Hate Baton Rouge traffic? Now you will have your chance to voice your opinion. According to the Advocate:

The public will have a chance to share ideas on how to improve the traffic flow on Interstate 10 from La. 415 to Essen Lane through a series of community meetings that will be held from Aug. 31 to Sept. 3.

“We’re going to be looking at all of the projects needed in this region,” said Perry Franklin, a local consultant who works on transportation and planning issues. That includes a southern crossing over the Mississippi River. “The limiting factor to improving I-10 is the width of the (interstate) bridge,” Franklin said.

Anyone who lives in or near Baton Rouge knows that traffic is a problem and sadly “fixing” I-10 alone won’t address all the issues.

Franklin told the Downtown Development District commissioners Tuesday that the meeting will look at improving the traffic congestion on I-10. But he said the Louisiana Department of Transportation and Development “clearly understands that this project alone will not improve vehicular flow in this community.”

Don’t get your hopes up for a quick solution. There will be only words and “reviews” of I-10 thru at least 2016.
Anyone who lives in or around Baton Rouge also knows that anything to do with road repairs or “improving vehicular flow” will take a long time…a very long time.

The meetings are part of a $2 million review being conducted by the Louisiana DOTD. The first part was a survey done earlier this year that garnered nearly 14,000 comments from people and businesses representing 17 different states. “This is a project that not only impacts Baton Rouge and the region, but the Southeast region of the United States,” Franklin said.

Not only will the survey results be discussed at the meetings, but scientific studies of traffic and crash data on I-10 will also be reviewed. State officials are trying to address the issue of near-daily accidents on or near the I-10 bridge, which lead to traffic snarls all across the city. A second round of meetings will be held in the spring. The plan is to complete “Stage Zero” of the improvement study by summer 2016. The next stage would involve getting firm suggestions on how to improve traffic on the interstate.

The Department of Transportation and Development will host three public meetings to discuss the results of recently conducted surveys concerning the Interstate 10 corridor in Baton Rouge. DOTD officials will present regional traffic study results and will gather public input regarding potential improvement, community concerns, and ideas for mitigation and enhancement. Residents are encouraged to attend one of the three meetings.

Interested in more news from Louisiana? We've got you covered! See More Louisiana News
Previous Article Leaked ‘Ashley Madison’ List Is Becoming Dangerous For Everyone Involved
Next Article Steve Carter Had His Domain Name Taken Over By His Opponent And Now He’s Being Slammed On It