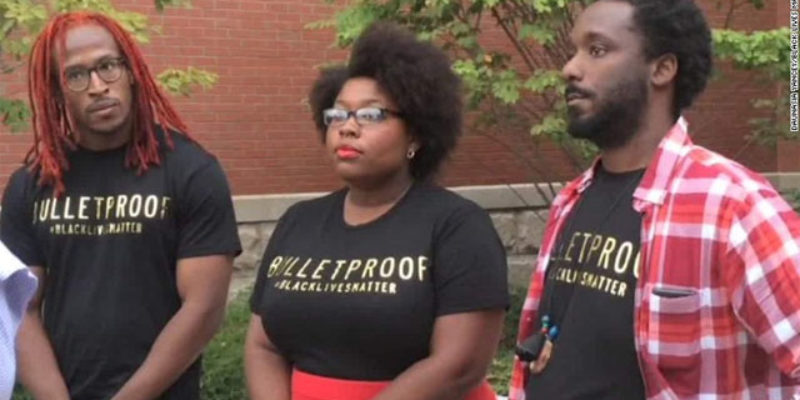 It’s Hillary Clinton, who hasn’t quite had her mic taken away by the #BlackLivesMatter crazies just yet, attempting to placate some of the mob from Boston. This is at a closed-door meeting after an event she had in New Hampshire a week ago.

Hillary has already had her own #BlackLivesMatter moments, though not as dramatically as Bernie Sanders, Martin O’Malley and Jeb Bush. So far she’s just been criticized for saying “All lives matter” and then had to recite the mantra of what is effectively an unofficial lobby for street criminals later.

Her campaign is desperate to avoid being embarrassed by those activists, and she has been pandering to their demands so far – but quietly, and in a way more designed to blunt Sanders’ rise in the polls than to diffuse the #BlackLivesMatter criticisms of mainstream politicians.

But in a longer clip of the exchange in question, this gets much, much worse and it bodes poorly for Hillary. What her interlocutors are complaining about is “mass incarceration,” which is one of their chief complaints. Specifically, Clinton’s husband passed the 1994 Crime Bill, which ultimately led to a lot more Americans spending time in jail. And, it should be said, a decrease in the crime rate. What Julius Jones, the #BlackLivesMatter agitator asking the questions in this clip alleges, is that “mass incarceration” is merely a device to devalue black labor – because it’s harder to get a good-paying job as an ex-con – and that the Clinton approach “industrialized” the practice.

She panders to him and talks about “America’s original sin,” and then tries to explain how there’s a limit to what she can “sell” and how the #BlackLivesMatter crowd needs to come up with an agenda that she can agree with and work with them on.

But they already have an agenda. The problem is that it’s not sellable to the general public. She either doesn’t know how insane the #BlackLivesMatter list of demands is or she’s playing dumb. Either way, it’s not like she’s going to be able to impart to these folks that she respects them and takes them seriously – which she shouldn’t, except without Hard left activists riling up the black community, you basically have a midterm electorate and the Democrats will have a brutal time winning in 2016.

But then it goes south, and the problem she’s going to have with these people becomes clear. Because he tells her cops shooting black thugs are a “white problem,” and her response is that she’ll only talk to white people about it.

The clip, in that context, isn’t a whole lot friendlier to Hillary than the 26-second version above.

Nor is it helpful to Hillary that she suggests you don’t change hearts, you just pass laws and “change the allocation of resources.” This is where she starts flirting with disaster among the mainstream of America who have had it with street crime in the black community and aren’t interested in any more demonization of police.

And for that flirtation with disaster, she’s purchased…not much.

Members of the group who met with Clinton spoke about the experience during an interview on MSNBC’s “The Rachel Maddow Show” Monday night with Melissa Harris-Perry, who aired segments of the video.

Julius Jones said Clinton “was ducking personal responsibility for the role that her and her family played” in laws pushed by the Bill Clinton administration that affected mass incarceration.

Daunasia Yancey also said the exchange served as a moment of reflection for Clinton, adding, “her response really targeting on policy wasn’t sufficient for us.”

The activists aren’t satisfied, Hillary’s people are in a state of panic and it’s obvious that holding Obama’s coalition together is going to be damn near impossible for such a haughty, rich woman to do.

Bill would have just rolled these people over the way Sister Souljah was when she tried to force him out of the mainstream. Hillary lacks the political skill and courage to do so, though it’s only fair to admit her party is far further left than it was when her husband was president 20 years ago.

She can’t roll them over, and she can’t give them what they want. There will be a schism in the Democrat Party before this election cycle is over, and nobody can fix it.

Interested in more national news? We've got you covered! See More National News
Previous Article Low Popahirum, August 18, 2015
Next Article Here’s An Interesting Petition Drive About Getting The Able-Bodied Off Of Food Stamps