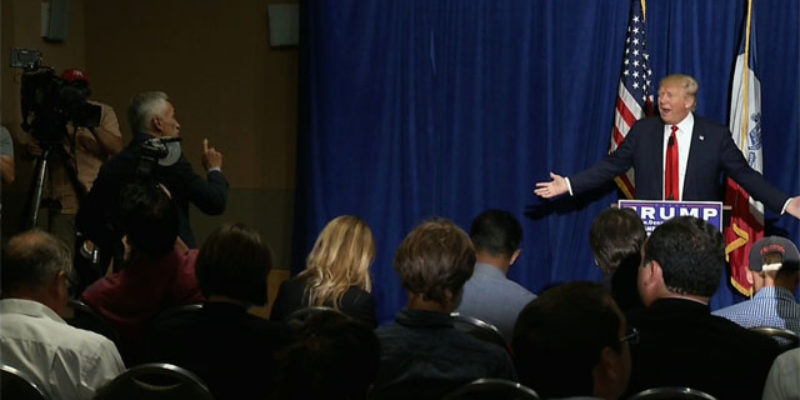 First, video of the Fusion TV and Univision host getting run out of the room by a security official at the presser Trump did in Iowa. Ramos attempted to butt in with a barrage of immigration questions before Trump even began taking questions, and the latter was having none of it…

And continuing the deported-Mexican theme, Ramos made it back into the room where he managed to pester Trump with a series of statements posing as questions about anchor babies and the impossibility of a wall along the border – which occasioned a verbal shoving match between Ramos and Trump…

He opened the conference by yelling at Univision anchor Jorge Ramos, who he claimed asked a question without being called on. He continued to yell at Ramos at some length about being out of turn, then turned to one of his campaign staffers, nodded, and pointed at Ramos, whereupon the staffer removed Ramos from the conference. (Note: I would have zero problem on principle with throwing Ramos out of a press conference on the merits).

The next reporter’s question, naturally, was, “Why did you have him thrown out?” Amazingly, Trump responded to this question, I’m not kidding, by answering, “I didn’t have him thrown out, you’ll have to ask security, whoever they are.” When reporters pressed him with the obvious fact that the person who had him removed was on his staff (he appeared to be wearing a Trump button even, but I can’t swear to that), he immediately changed his tune to say that it was because the reporter was a “highly emotional person,” with no mention of the fact that 30 seconds earlier he had been denying that he had Ramos thrown out at all.

Things only got more bizarre from there. A reporter asked him whether he would self-fund his campaign. Showing a complete inability to grasp campaign finance law (or interest in the details), he said, in effect, “Well, you know, I could, I make $500 million a month, and then at some point the GOP has to come in and run things.”

Trump seemed particularly fixated on Jeb Bush, belittling his standings in the polls and calling him a “low energy person.” He also said, “You know, Jeb Bush has raised $114 million and no one knows who any of his donors are, you can’t find it out!” – apparently unaware that the FEC and numerous other sites contain easily searchable online databases of campaign donors.

Trump continued to field questions about the Ramos ejection. Bizarrely, Trump finally capitulated and seemed eager to field questions from Ramos. “Sure, bring him back in here, I’d love to have him, get him in here in two seconds.” During the middle of Ramos’ question, Trump essentially began bragging that he had sued Univision for $500 million dollars, stating that “I bet your company’s very worried about that.”

And now, the punch line…

When I think of the gaffes that have sunk other candidates – whether it was Sen. Marco Rubio (R-FL) drinking water, or Rick Perry saying “oops,” George Allen saying “macaca,” or Scott Walker refusing to answer questions that didn’t interest him, it’s amazing to me that Donald Trump is left standing at all.

But then, in another sense, it makes sense. When a homing missile locks in on a target, one of the best way to defeat it is to release a bunch of chaff so the missile gets confused and doesn’t know what to lock on to.

Watching Donald Trump speak and answer questions, though, is like watching a billion targets appear in the sky all at once, for a political opponent. Each thing he says is so bizarre, or ill informed, or demonstrably false, or un presidential in tone or character, that it becomes impossible to know which target to lock on to or focus on. And to the extent that he makes a policy statement, it is so hopelessly vague and ludicrous that it’s impossible to know where to begin, at least within the context of the 30-second soundbite that the modern political consumer requires (and chances are, he will say something diametrically opposed to it before the press conference is over anyway).

Donald Trump is the political equivalent of chaff, a billion shiny objects all floating through the sky at once, ephemeral, practically without substance, serving almost exclusively to distract from more important things – yet nonetheless completely impossible to ignore.

This is substantially correct, and Trump’s campaign – complete with the Twitter account that looks more like a Don Rickles concert than anything resembling politics – is increasingly a reality TV show without the network deal. The GOP has needed someone to clear out its cobwebs and deliver black eyes to its various Ned Flanderses and Judge Smailses, and Trump is without doubt doing a service to the party by making a just mockery of a political process as stilted and dysfunctional as it is rigged to make Republican victory more difficult. I’ve said from the beginning of this wild ride that because Trump has provided a jolt to the system he’s actually good for the Republican Party, whether they understand it or not – but that doesn’t mean Trump is a plausible presidential candidate.

Clearly he isn’t. There is nothing in his performance so far which qualifies him to be president, and even his fans don’t really believe he is – fundamentally they just like watching him burn down all the dead wood. And in August of 2015 they can do that without consequence; by January of 2016 the bet is it’ll be a different story.

That being said, even while Trump’s abuse of some members of the media – his continuous tirade against Megyn Kelly has begun to defy explanation – is difficult to defend you really can’t fault him for giving Ramos the bum’s rush. After all, there is no bigger douchebag – and yes, that is the proper word – in American media at the moment than Jorge Ramos. He’s not a journalist but a political activist, and an overly aggressive one at that. Furthermore, Ramos’ daughter works in Hillary Clinton’s campaign, which puts his lack of objectivity completely front and center. And Ramos’ interview style is abusive, to put it charitably – he doesn’t ask questions so much as deliver harangues, which he permits only brief interruptions of by those he purports to question.

Ramos got what he deserved. And the public got the show it’s been enjoying since Trump got in the race. None of this bodes particularly well for the future of the Republic, but it’s still really, really early.

Interested in more national news? We've got you covered! See More National News
Previous Article Where Are They Now?: Donald Trump Supporters Edition
Next Article An Item Of Special Information For Bob Mann’s Students At LSU