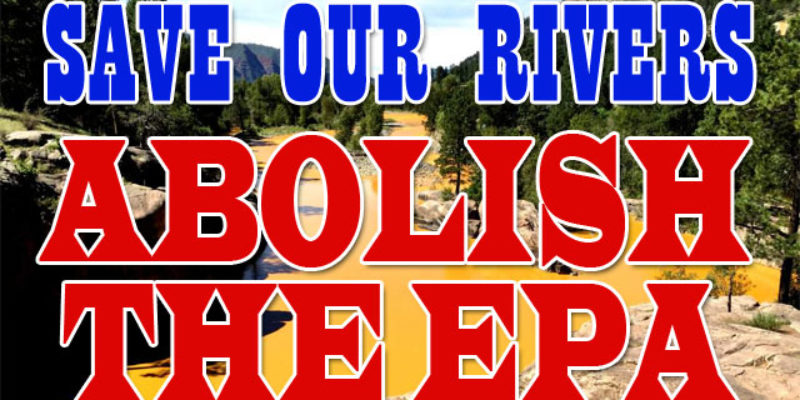 This might come off as more talk than action, particularly since the people paying attention to the debacle whereby the EPA essentially deliberately caused some three million gallons of wastewater laden with heavy metals from a Colorado mine to wash into the Animas River – a tributary of the Colorado River – and turn it the color of orange juice already know what an existential event that should be for the agency.

But at least Congress is promising something in response, though not quite what you’d see in a sane government…

The federal agency’s critics are already seeking to use its much-maligned handling of the mine spill to undercut the Obama administration’s rollout of major regulations aimed at cutting greenhouse gas emissions at the nation’s power plants. Members of oversight committees in both the House and Senate say they are planning hearings after Congress returns from its August recess.

“The EPA is supposed to help prevent environmental catastrophes, not cause them,” said Rep. Steve Scalise, R-La., a member of the House leadership and the Energy and Commerce Committee. “But, sadly, President Obama’s EPA has been too busy threatening American jobs with radical regulations instead of focusing on what should be their core mission.”

EPA and contract workers accidentally unleashed 3 million gallons of contaminated wastewater as they inspected the idled Gold King mine on Aug. 5, just two days after Obama unveiled his Clean Power Plan during an event at the White House.

The timing could hardly be worse for the beleaguered regulatory agency, a frequent target for congressional Republicans and pro-industry groups. Attorneys general for at least 15 states say they plan to sue over the new carbon restrictions, and such coal-mining backers as Senate Majority Leader Mitch McConnell, R-Ky., are urging states to simply ignore new carbon rules from Washington.

Over the last week, even Democrats representing states affected by the spill have publicly criticized the agency’s response as anemic. That has forced top administration officials off-message just as they were launching an effort to sell the new carbon rules to the American people.

Here’s the problem – they’ll have those hearings, and they’ll be explosive. But you can already see the battle lines being drawn and there won’t be any actual changes as a result…

“I think we have seen what happens when the EPA comes after private industry — they come after them with heavy hand,” said Sen. Cory Gardner, R-Colo. “Now, the shoe is on the other foot, and we have seen a lack of communication and coordination. … This goes to the core competency of the EPA.”

Bob Deans, a spokesman for the environmental group Natural Resources Defense Council, predicted that people would see efforts to link the spill to regulations aimed at addressing climate change for what it is — political theater.

“The public wants action on climate change and we expect our waters to be protected from mining waste,” Deans said. “We count on the EPA to do both. This tragic accident hasn’t changed that. If anything, it’s highlighted the risks we take and the price we pay when we allow environmental threats to fester.”

And now comes John Boehner, who wants the president to “demand accountability”…

“The House will continue to monitor the situation and the appropriate committees will conduct rigorous oversight to make sure the administration is assessing the damage the EPA has caused and taking action to clean it up,” said House Speaker John Boehner, R-Ohio. “Now that his EPA has accepted full responsibility, I expect President Obama to demand full accountability for what happened here.”

Because it’s on Obama to demand accountability. Not Congress, who will hold hearings and talk about it.

Again, the hearings are a good idea.

But a week before destroying the Animas River, the EPA put out a rule aimed at destroying the coal industry. It’s already destroyed a large segment of California’s agriculture with its insane water policy. It’s threatening to destroy Louisiana’s industrial expansion with dumb air policies. And on, and on.

The issue shouldn’t be to try to pressure Obama to “demand accountability,” the issue should be killing the EPA outright. Congress can hold hearings if it wants, but it’s hardly necessary to build a case that the EPA is out of control and needs to be done away with. There is a considerable body of thought out there indicating that the EPA was hell-bent on making the Gold King mine a Superfund site, and the release of that wastewater was little more than a heavy-handed effort at forcing a Superfund designation. See the NRDC flack’s comment above – the release of three million gallons of mine waste laden with lead, cadmium, arsenic and other toxic materials aren’t important, it’s the threat of mine waste in general that’s important.

If you had a Congress willing to act and not talk you could make Obama oversee the dismantling of the freedom-eating, liberty-polluting government machine he has abused for seven years. But you don’t, and it’s not because the EPA and similarly corrupt agencies are so vital to our national survival.

All 50 states have environmental quality agencies, and any one of the 50 could be counted on to not destroy a river system out of a desire to surreptitiously expand its power. Ask the people of Silverton, Colorado what they think of the EPA’s “help.”

Interested in more national news? We've got you covered! See More National News
Previous Article Coulter Leads the Loud Voices Toward Oblivion
Next Article Meanwhile, Mitch Landrieu Is Going To Do To New Orleans’ Economy What He Wants To Do To The Robert E. Lee Statue