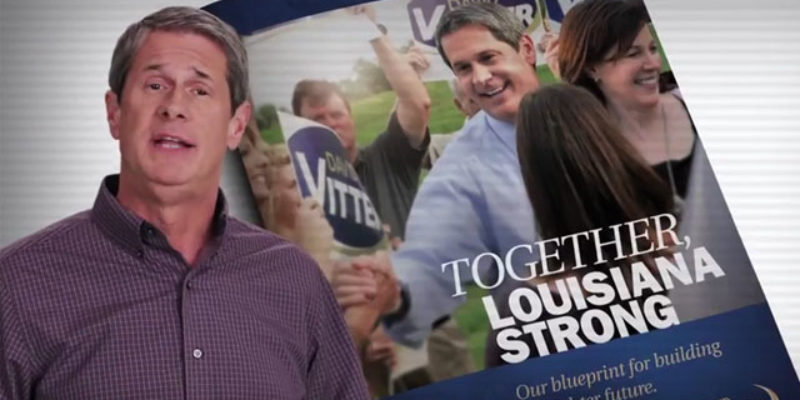 Surely by now, if you’re in Louisiana, you’ve seen this ad…

A lot of what’s suggested in the ad is the same type of thing Treasurer John Kennedy often talks about – consulting contracts and fat perks embedded in the state budget. But the 10,000 state cars he says are unnecessary is a little more interesting; if there are anywhere near that number then he can definitely claim to have found some fat to cut that the current crowd at the Capitol lacks the will to get done.

We like this ad a bit better than Vitter’s first one of the cycle. Both are a bit campy and light, but this one has more substance as well as personality to it. And it’s effective, as it promotes Vitter as a solutions-oriented candidate – which is what he’s been positioning himself as from the beginning.

In the last campaign finance disclosure, Vitter had over $9 million in his war chest – meaning that you’re going to be seeing this spot virtually continuously, or at least until it’s replaced by another Vitter spot. With that kind of money to spend, he’s likely to bury the other three candidates in the field with TV ads and direct mail. What will be interesting, now that Vitter’s blitz has begun, is whether it moves the needle or changes the race – in the spring he was polling as high as 37 percent, but Scott Angelle’s TV blitz seemed to have its most pronounced effect in siphoning a few of Vitter’s votes away and he’s now somewhere between 30 and 32 depending on the poll. If this spot can bring Vitter back up into the high 30’s, it will really put pressure on Scott Angelle and Jay Dardenne, the other two Republicans in the race fighting for a spot in the runoff.

Interested in more national news? We've got you covered! See More National News
Previous Article Everything You Need To Know About The Southwest Louisiana Shooting And Stabbing Spree Yesterday
Next Article AFTERBURNER: The Happy Warriors Showing How To Beat ISIS