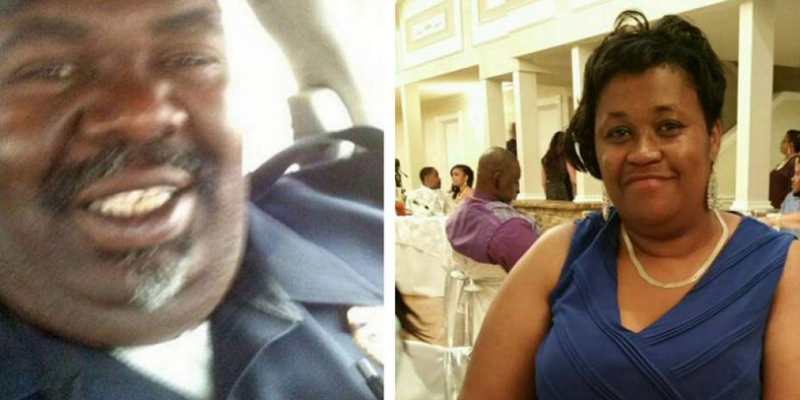 Yesterday, a tragedy occurred in the small town of Sunset in St. Landry Parish, just west of Baton Rouge.

Rumors are continuing to go around about the stabbing/shooting incident, so we’ve compiled all the facts about the case here:

Who? The suspect has been identified as 35 year-old Harrison Lee Riley Jr. of Arnaudville who allegedly shot and killed Sunset police officer 51 year-old Henry Nelson and stabbed to death 40 year-old Shameka Johnson (both pictured above).

Riley was the cousin of Nelson and Johnson. The suspect also stabbed his wife Courtney Jolivette Riley and Johnson’s sister, both of whom are being treated at hospitals.

What? Apparently, Riley, who was on drugs at the time of the incident, stabbed Johnson, her sister and his wife at Johnson’s mother’s house on Anna Street in the town of Sunset, just three blocks away from an Exxon gas station.

Then, Nelson responded to the stabbing incident and was shot by Riley and airlifted to a nearby hospital. This is when Riley fled, crashed his Nissan Altima and barricaded himself inside the Exxon gas station.

The SWAT Team showed up to the scene and used tear gas to try to get Riley to come out of the gas station. Riley’s brother-in-law was on the scene trying to get the suspect to come out safely.

Apparently, there were three people inside the gas station when the suspect showed up. However, all were able to flee the store safely and none of them were injured.

The slain police officer: Nelson had been with the Sunset Police Department since 2002 and was one of only six cops on the force. Today would have been his last day on the job before taking a month-long vacation to visit a teenage daughter of his.

Nelson is the sixth on-duty police officer to have been killed this year in Louisiana. That is more than any cops killed in one year within the last decade.

Interested in more news from Louisiana? We've got you covered! See More Louisiana News
Previous Article The Only One Responsible For The Virginia Television Shooting Is Vester Flanagan
Next Article Vitter’s “Must Be Doing Something Right” Ad Is Covering The Airwaves