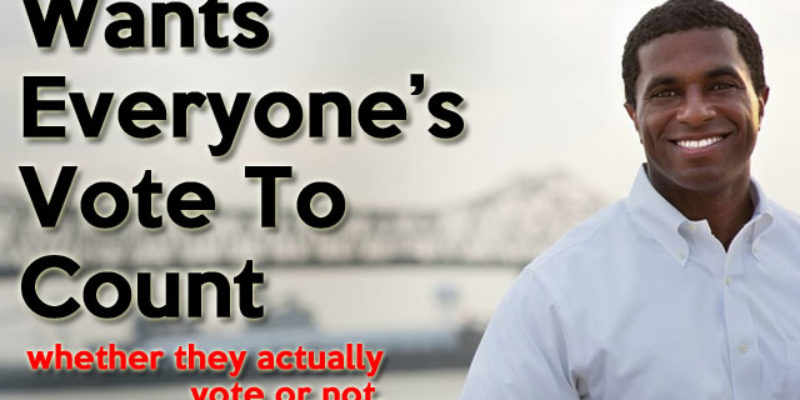 Nobody really believes that Tom Schedler has anything to worry about from Chris Tyson, the young law professor at LSU and former Mary Landrieu staffer who has been running for the job for over a year. Tyson is only sitting on about $80,000 as of the financial disclosure form he filed last week, compared to the $398,000 Schedler has in the bank.

Tyson would probably be on par with Schedler in the money race had he not be spending more than he took in over the last three months; the veteran incumbent knows that in most cases, a down-ballot statewide race draws little to no attention until the late stages of the campaign and as such it’s a poor use of one’s resources to spend a great deal of campaign funds.

And therefore, there is no particular reason why a black Democrat would mount a serious challenge to a Republican incumbent in a race like the one for Secretary of State.

Particularly when Tyson decides he wants to run on automatic voter registration, which is about as open an invitation to fraud and abuse as you can imagine. 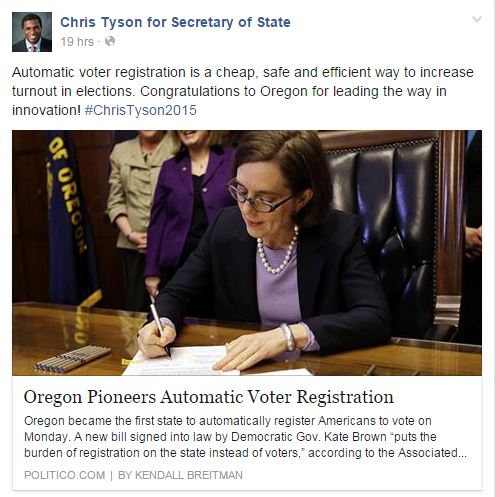 First, you’ll struggle to find any responsible registrars of voters in Louisiana who are in actual support of automatic voter registration. Turning a voluntary system whereby the voters are responsible to maintain updated addresses with the registrars if they want to participate in the process a compulsory system where you don’t have to do any of that and the bureaucrats are all of a sudden responsible to keep track with tens of thousands, if not hundreds of thousands, of current addresses for each parish registrar’s office is neither cheap nor safe nor efficient.

Second, this is an obvious gambit by the Louisiana Democrat Party to enable voter fraud.

When you have lines on the voter rolls you know don’t represent people who will actually vote, you are free to manufacture votes out of those lines.

It’s Democrat voter fraud, old-style. When you have precincts which are uniformly Democrat and in neighborhoods where Republicans have a very difficult time recruiting poll-watchers, you can bus “voters” in on Election Day and have them fraudulently identify themselves as the “voters” who are on the rolls but either will never vote or do not exist, and no one will be able to disprove those “votes” until much later.

Clean voter rolls eliminate the opportunity for that kind of fraud. Automatically registering all the warm bodies, half of whom would never vote of their own volition and don’t even know who’s running, does nothing to promote an informed and engaged electorate and not much more to promote additional people voting unless the process is abused. And abuse of the process has a pedigree in Democrat politics – think back to all those ACORN voter registration drives which produced dead people and fictional characters being turned in as new voters by the thousands.

Conservatives understand this, and so do moderates. It’s only partisan Democrats who don’t.

And we now know Tyson is a partisan Democrat and an apologist for vote fraud. Who is running for Secretary of State where he would have the capacity to destroy the integrity of Louisiana’s electorate.

Our thanks to Tyson for his honest advocacy of dishonest and destructive policy proposals. It’s illuminating that he would do so, if disqualifying of him as a serious candidate for the office he seeks.

Interested in more national news? We've got you covered! See More National News
Previous Article How The Cronyism Of Elon Musk’s Tesla Motors Will Kill American Drivers
Next Article The Big Difference Between Cecil The Lion And Cecile Richards In One Photo