Update at 5:00 pm: The New Orleans Advocate reports that the state’s Supreme Court ruled that Mayor Mitch Landrieu does not have to be on house arrest while he is appealing the contempt of court ruling by Civil District Judge Kern Reese.

Update at 4:00 pm: FOX 8 reports that has denied Mayor Mitch Landrieu’s request to drop house arrest for not paying New Orleans firefighters backpay money. Landrieu’s last resort to avoid house arrest must be through striking a deal with the firefighters.

Update at 3:30 pm: WWL reports that Mayor Mitch Landrieu has filed an appeal to the house arrest placed on him by Civil District Judge Kern Reese. Landrieu’s appeal has not yet been answered by the court, but Reese said he is looking into both sides on the issue.

Update at 3:00 pm: Mayor Mitch Landrieu does not seem to be all that upset about going on house arrest in less than two hours. The mayor tweeted out an hour ago that he was excited to see Trombone Shorty on SportsCenter.

Update at 11:50 pm: Mayor Mitch Landrieu tweeted on Twitter to “support our first responders” by giving blood hours before he is placed on house arrest for refusing to pay first responders’ earned backpay. Take a look at the tweet here: 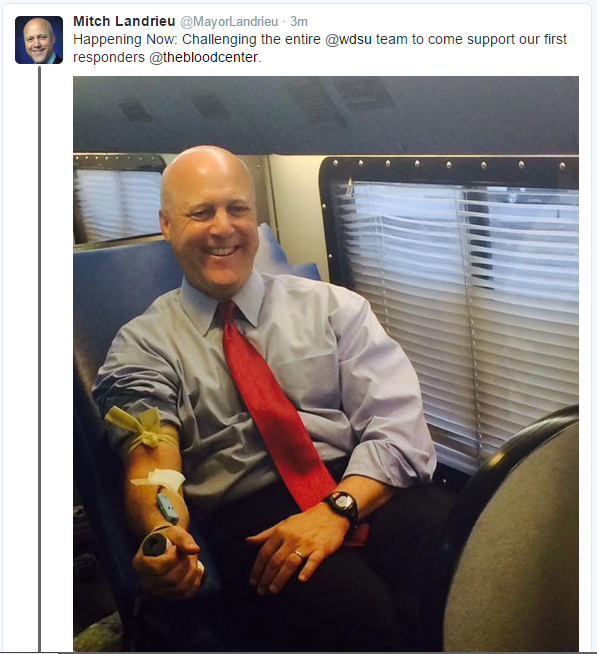 Mayor Mitch Landrieu of New Orleans will begin house arrest as of roughly 4pm or 5pm if he does not come to a solution on how exactly to pay New Orleans firefighters $142 million in backpay.

Earlier this week, Landrieu was held in contempt of court by Civil District Judge Kern Reese for failing to pay firefighters $142 million in backpay after being mandated multiple times by court orders.

Afterward, Landrieu said that he would gladly take house arrest for the remainder of his time in office, which is another two years, because he says the city cannot afford to pay the firefighters the backpay.

The city of New Orleans has owed the New Orleans firefighters millions in backpay for over a decade now. Back in the 1990’s, the city failed to cooperate with state-mandated pay raises for the firefighters and therefore the total in backpay has racked up to over $100 million.

Landrieu said yesterday that the move by Reese is a “judicial coup” and alluded to the idea that the New Orleans court system is going after him for political purposes.

Check back with the Hayride for live updates on this developing story.