It would be inconceivable to do a post called The Battlefield on September 11 without delving into the anniversary of the most significant events of that date.

Unfortunately, to do so is a sad task – and not just for the remembrance of those lives lost and the outrage felt.

9/11 was the manifestation of a war, one that we in this country have never fully understood or accepted was in place. There are people who believe 9/11 happened because we had troops in Saudi Arabia, or that it was blowback for the CIA arming the mujahedin in Afghanistan (given the political leanings of the people who make that argument, you almost can detect a wistful sigh over the ill effects on the Soviet Union from our having supplied those Stinger missiles and rifles).

Few seem to understand what 9/11 actually was or what it represented, and that’s why we are worse off now in the war than we were on 9/11.

The roots of 9/11 don’t involve American troops or the Afghans or anything that happened in the 1980’s or 1990’s. 9/11 happened as part of a long continuum of events stretching all the way back 1393 years to a different anniversary, one which was marked on Wednesday. That date, September 9, 622, was the day Muhammad left Mecca, where he was hated and persecuted for his new religion among the pagan majority there, on an eight-day journey to what would become his new home at a city called Yathrib, later renamed Medina.

That journey is known as the Hijrah, and it marks an important point in the development of Islam – as Muhammad traveled abroad to spread the religion. Since that time, a key tenet of Islam has been found in Sura 4, verse 100 of the Qu’ran, which we referenced in Tuesday’s Quote Of The Day…

“And whoever emigrates for the cause of Allah will find on the earth many locations and abundance. And whoever leaves his home as an emigrant to Allah and His Messenger and then death overtakes him, his reward has already become incumbent upon Allah. And Allah is ever Forgiving and Merciful.”

It’s the Hijrah which signifies 9/11, because 9/11 was the product of 20 Middle Eastern Muslims who emigrated to the West in order to further the cause of Allah. The planning and financing of their terror attacks might have originated from Afghanistan or Saudi Arabia, but that’s not the actionable fact. The actionable fact is that Muslim jihadists bent on the destruction of American power were among us for the purposes of committing those acts, and they had been sheltered and aided by Muslim institutions previously established in America by other emigrants to Allah.

Just as Muhammad established a mosque just outside Yathrib before entering the city to convert it to Islam, and that mosque served as a staging area for the takeover.

And while some fraction of the scads of Muslim jihadist terror attacks in this country since 9/11 have been undertaken by American converts to Islam, it is Muslim emigrants to Allah operating on the basis of Sura 4, verse 100 who have been responsible for the vast majority of the jihad.

And this matters today, because yesterday, just a day after the anniversary of Muhammad launching his journey, our president announced he would be taking in some 10,000 additional emigrants to Allah in the form of Syrian “refugees.”

As Robert Spencer has noted, these are not “refugees” at all. They are, rather, economic migrants at minimum and participants in a new Hijrah more accurately. They are spreading the faith as colonists, and they will use the resources of the West, and the welfare state in particular, to further that process.

Before you scoff at this, consider something which has been poorly covered by our slavishly stupid mainstream media; namely, that while Saudi Arabia refuses to take so much as a single Syrian refugee into their underpopulated desert country, in which there is a pre-built tent city capable of housing millions, the Saudis have already committed to building some 200 mosques in Germany for the religious instruction of the hundreds of thousands of emigrants to Allah who are being resettled there.

And the Germans currently have the lowest birthrate in the world. How long do you think it will take for Germany to become the new Yathrib?

We are losing this war, because we do not understand that it is a 1400-year old civilizational conflict. We do not understand that 9/11 was another mark on a timeline which includes the Moorish conquest of Spain, the Ottoman invasions of southeastern Europe (and the Hungarians and Slovenians, who refuse the Syrians entry, understand very well the historical lessons of those invasions), the Barbary corsairs’ centuries of raids on European coastal towns in search of slaves (well over a million Europeans were taken before French and British military power finally put down the slave raiders by force) and the modern-day Hijrah going on in Europe which our president Barack Hussein Obama will now involve us in. At the same time, that is, he puts us into a de-facto treaty to allow Iran to spread the jihad by means nuclear and otherwise, while that country’s leader boasts of the destruction of Israel – the sole outpost of Western civilization in the Middle East – within 25 years.

We refuse to understand, and we are losing. Unless something changes, historians will record 9/11, and our myopic, therapeutic response to it, as a warning sign missed along the way to a new Dark Age.

This is good news. Let’s not pretend there is much chance of it leading to anything resembling improvement, however.

On that subject, I wrote an American Spectator column this week on the acrid smell of urine emanating out of our Democrat-controlled cities…

If you want to know what inevitably results from allowing the Far Left to run cities cleared of middle-class voters over decades, picture vast armies of homeless bums gleefully micturating on public infrastructure, while public officials merely beg for more clichéd choices amid terror of alienating a prominent, if noisome and not quite sane, constituency, until that piddle-drenched infrastructure inevitably topples.

Bernie Sanders is now ahead of Hillary Clinton in Iowa as well as New Hampshire. She is finished and doesn’t know it yet. It’s a matter of time before Joe Biden enters the race, and when he does you will see the Obama administration make a deal with her – she gets out and she won’t be prosecuted.

Whichever Republican ultimately wins election next year needs to tear up that deal along with the ridiculous Iran treaty and have DOJ empanel a grand jury on the Clinton e-mail case. Corruption and mendacity on this scale cannot be forgiven if the Republic is to survive.

On a slightly lighter side, I have this… 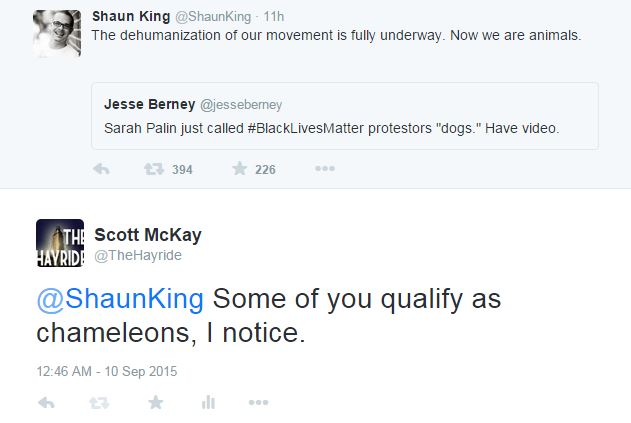 In case you don’t get the joke, this link is for you.

When Apple introduced a host of new products today, one demonstration included using Photoshop on a woman’s face to make a smile.

And the feminists have gone completely bananas over it.

As usual, Ace Of Spades has the proper reaction…

What I like most about modern SJW feminists is how they completely disprove all those old hoary negative stereotypes about women, like the old saw that they get hysterical over trivial matters usually related to fashion and beauty.

I don’t give a fig what he said to these two thugs. Charge them with first-degree battery and ship them off to jail.

Those NRA Foundation ads might be the best messaging going on the conservative side.