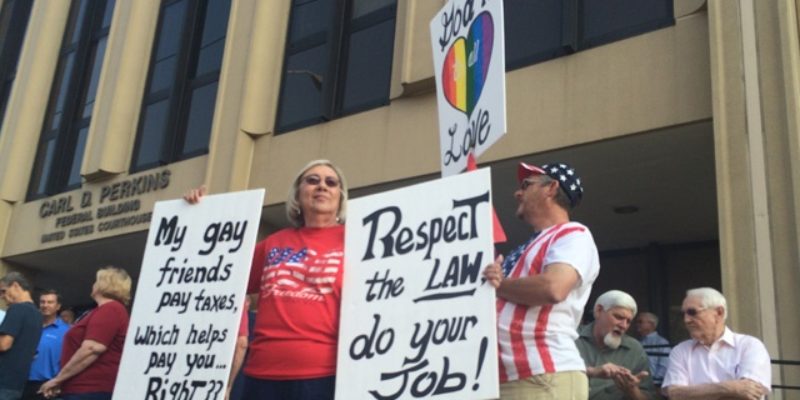 You just have to love the dramatic gay leaders of the LGBT community.

Take Kim Davis, the now infamous Kentucky Clerk of Court that refuses to sign her signature on gay marriage licenses.

Just like President Obama should not be allowed to decide what laws he wants to enforce and which ones he doesn’t (think of the immigration laws he has willfully broke), Davis should do exactly the same.

But she won’t follow the law, which mandates that she sign gay marriage licenses. So instead, the public has to hear this entire religious beliefs vs. gay rights argument again.

With this has come a massive media firestorm, where pretty much every part of Davis’ past personal life has been brought to the forefront by the media.

Wow. Wish they would do that much digging on a woman who was formerly the Secretary of State and who has been using a private, insecure email and server. But enough about Hillary Clinton.

Now, Davis has been held in contempt of court and jailed because she will not sign the gay marriage licenses.

Is she still wrong not to uphold federal law? Absolutely.

However, as Rep. Mike Johnson (R-Bossier City) pointed out today, the judge in Davis’ case had multiple options. He could have had other officials issue marriage licenses in the county, or marriage licenses could be distributed at the state level or the existing forms could be modified to remove Davis’ name.

But, none of that has happened. Instead, they’ve jailed Davis. And the gays are in an uproar that there are still Americans who do not agree with gay marriage.

Like today, for instance. There have already been four marriage licenses issued to gay couples in the county where Davis is clerk of court.

Davis’ crime certainly does not fit the punishment.

Instead of the gay community acting like this little county clerk is going to destroy their marriages, why not just take it for what it is?

There are still Americans who do not like gay marriage. Ok, nothing the gay community can do besides try to persuade them otherwise.

This lambasting of religious communities, though, does not help the gay community or those who believe otherwise on this issue. In fact, it makes everything and everyone more divided and more polarizing.

Of course, this case with Davis is further proof that every state should be getting out of the marriage business altogether.

Therefore, many have stopped issuing them entirely and now the state is pushing for marriage laws that takes the state entirely out of issuing the marriage license to begin with.

Basically, marriage licenses in Alabama may soon be handled privately, then sent to the state for recording purposes only.

If the rest of the country got on board with this idea, we would not have to hear about people like Davis who claim religious objections as an excuse for not following the law.

And we wouldn’t have to hear the constant over-dramatics from the gay community on issues that they know will be settled quickly and, more than often, in their favor.

Interested in more national news? We've got you covered! See More National News
Previous Article VITTER: Really, Mitch?
Next Article Could This Be The Greatest Movie Mashup You’ve Ever Seen?