Richard A. Marksbury sent a letter on August 21, which the Hayride has obtained a copy of, to the New Orleans Clerk of Court, asking that the New Orleans City Council consider removing the famed Andrew Jackson statue which sits directly in front of the St. Louis Cathedral.

In the letter, Marksbury cites the city’s ‘Nuisance Ordinance,’ saying that the monument of Jackson represents white supremacy to many, as it favors one race or ethnic group over the other. 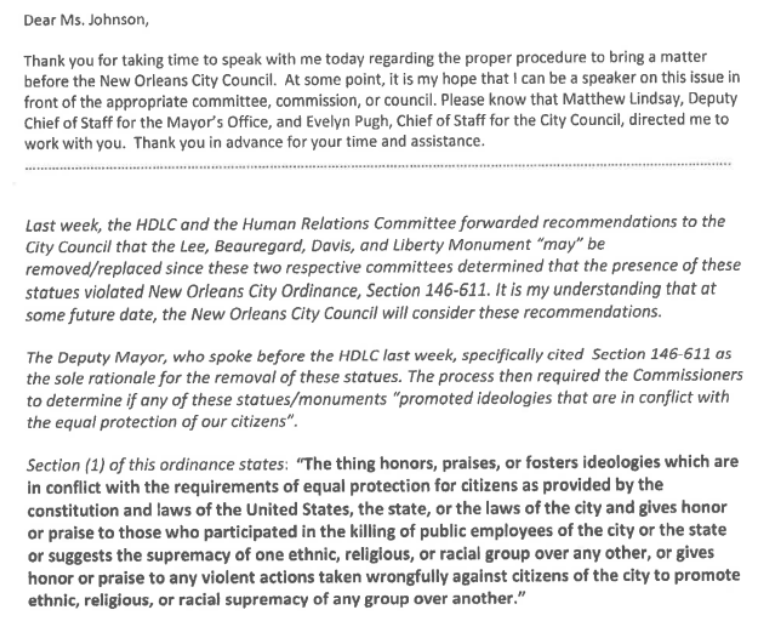 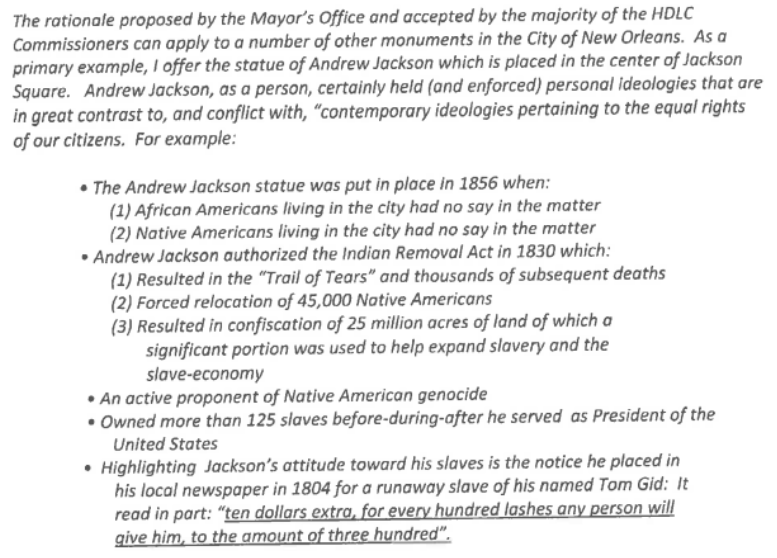 Marksbury’s citing of the ‘Nuisance Ordinance’ is in-line with what Mayor Mitch Landrieu has done in the past, when he first requested that Lee Circle, PGT Beauregard, the Jefferson Davis monument and the Liberty monument all be removed because they represented hate.

Marksbury, though, seems to be on the other side of this issue. Back in July, he wrote a letter to the New Orleans Advocate where he said that removing Lee Circle and PGT Beauregard would open a Pandora’s box. Read an excerpt from his letter here:

If the statue to Robert E. Lee causes discomfort, unease, pain and anger to some of our citizens, why don’t these same citizens feel similarly when walking across Jackson Square and encountering the “slave owner and Indian killer” Andrew Jackson perched on his mighty steed?

Those who despise Lee seem to believe the slave-owning men who became president of the United States enjoy an exemption from having their monuments, schools, states, streets, universities, money, cities and parishes torn down or renamed. To them, the end justifies the means. George Washington owned over 300 slaves, Thomas Jefferson had almost 150 slaves and good old Andrew Jackson owned 160 slaves who worked on his beloved Hermitage plantation. They owned slaves while serving as president of the United States.

Not only did Andrew Jackson own slaves while holding the highest office in our country, he signed the Indian Removal Act, which resulted in the forced removal of approximately 50,000 Native Americans from their 25 million acres of homeland. Remember the “Trail of Tears”? Surely, those with Choctaw, Creek, Cherokee or Seminole blood take great offense at the honorific position Andrew Jackson has been granted by the city of New Orleans. Why are our elected leaders silent on Jackson?

Marksbury seems to be using the letter to show how hypocritical it is for the Landrieu administration to play politics with a few statues in the city and not others.

The group ‘Save Our Circle,’ has led an effort directly against Landrieu’s perception and proposal that the monuments represent a kind of white supremacy, saying the monuments are not only tourist attractions, they are deeply ingrained in the historical identity of the city.

The killer was photographed on his Facebook page with a Confederate flag and since, Democrats (and some Republicans) across the country have buckled down on the idea that any and all things Confederate must be removed from the public view.

Thus, these elected officials have created a slippery-slope, begging the question: Just where exactly does this purge of history end?

Editor’s Note: This article was updated to clarify the views of Richard Marksbury.

Interested in more news from Louisiana? We've got you covered! See More Louisiana News
Previous Article The Ninth Planned Parenthood Video Is Out And It’s As Chilling As The Others
Next Article Why In The World Was Nancy Pelosi In New Orleans To Commemorate Hurricane Katrina?