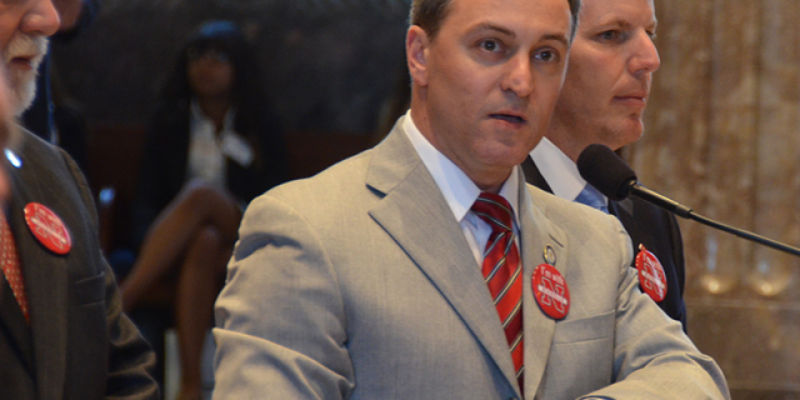 Last time we covered State Senator Norby Chabert (R-Houma), we looked into his campaign’s questionable spending. He spent his campaign money on everything from LSU season tickets to concerts.

After reading the story, a source contacted The Hayride and asked us to look into a Christmas party he hosted in 2012 that was paid for by, you guessed it his campaign account. The source told us that Chabert actually threw a Christmas Party for the staff of the bar he owns, Bar Roussell in Houma. HoumaToday.com describes it as a bar with an “upscale, yet welcoming feel.”

Anyway, back to the party. Here’s the listing on his 2013 campaign finance filing.

On and after January 1, 1991, contributions received by a candidate or a political committee may be expended for any lawful purpose, but such funds shall not be used, loaned, or pledged by any person for any personal use unrelated to a political campaign, the holding of a public office or party position

Now, it’s hard to see what holding a Christmas Party has to do with anything “related to a political campaign, the holding of a public office or party position.” It’s especially a no-no if it was a Christmas Party for the staff of the bar you own.

Here’s a Facebook post someone posted of the party in question. The screenshot was provided to us by the same source.

If this was an office Christmas Party, first of all it looked fun. It looks like just a good ol’ fashioned coonass gathering. The washboards, along with the fake bayou cabin decor, just give it the touch of faux authenticity.

I don’t remember The Hayride’s Christmas parties being this fun. The eye candy wasn’t nearly as attractive as they were at Chabert’s party. But enough about that.

As fun as this office Christmas Party was, if it was paid for out of campaign funds, it was illegal. But it would be entirely consistent with how Chabert has treated his campaign fund. He has used it to party for the past four years.

By the way, Chabert was one of the fiscal geniuses who voted to raise taxes by $700 million and passed that budget that we’re already making cuts to. Perhaps the people of Houma should send someone to Baton Rouge who is more interested in actually working to fix the state’s problems than partying on his contributors’ dime.

Interested in more news from Louisiana? We've got you covered! See More Louisiana News
Previous Article Today Is Failure Theater Day
Next Article VIDEO: Ted Cruz Gets Accosted About How Global Warming Is Driving The Lobsters Away, And He Proceeds To Own His Questioner