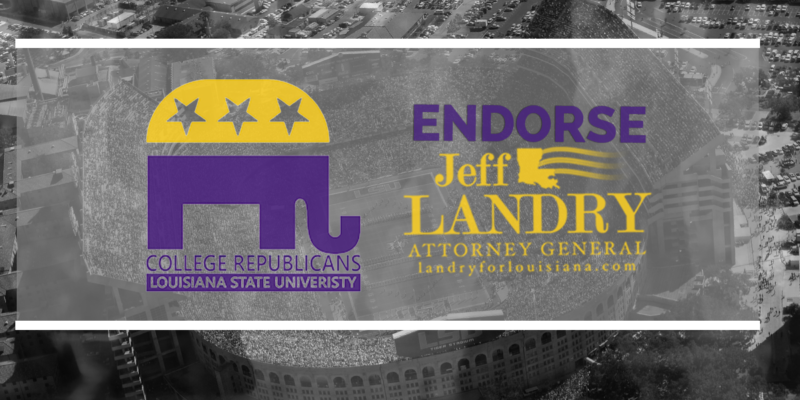 Adults use the phrase, “Kids these day” with more frequency than ever. They say that the kids these days are liberal, immoral, unkind, un-Christian and the list goes on. The College Republicans at Louisiana State University are taking strides to reverse the stereotype of the millennial. That’s why for the first time in as long as any of us can remember, we have endorsed a candidate for office. The executive board of the LSU College Republicans has unanimously voted to endorse Jeff Landry for Louisiana Attorney General.

Jeff Landry is the Republican (ahem… Conservative) in the Attorney General race. He was voted the most honest man in Washington. He served as a law enforcement agent where he protected the streets of his home in St. Martinville. Jeff is running for his family, which includes his wife Sharon and his son JT. He wants to fight for a better future for his family and for the families of all Louisianans.

Jeff is running because he understands the fiscal issues that we face today. He knows that our generation, the millennials, is going to be the generation that suffers from this irresponsible government. Well Jeff isn’t content with passing the problems onto the next generations. Jeff cares about the future of his son and of the rest of the young Louisianans.

Planned Parenthood is on everyone’s mind and Jeff has a plan to deal with it. He is fighting tirelessly to defund this organization that takes so many innocent and defenseless lives. We recognize the passion in Jeff to fight for the voiceless. As a devout Christian, Jeff knows that it is up to us to protect those that can’t help themselves. We support Jeff because he is pro-life because it is the right thing to do, not because it is convenient for him to get elected.

Jeff Landry is the best candidate in this race. He is honest,ethical and hardworking. Landry will continue doing what’s best for our state. He did as a Congressman, and he will as Attorney General.

Interested in more national news? We've got you covered! See More National News
Previous Article Did You Catch Greg Gutfeld Telling Geraldo Rivera “Screw You!” On Friday?
Next Article The Ninth Planned Parenthood Video Is Out And It’s As Chilling As The Others