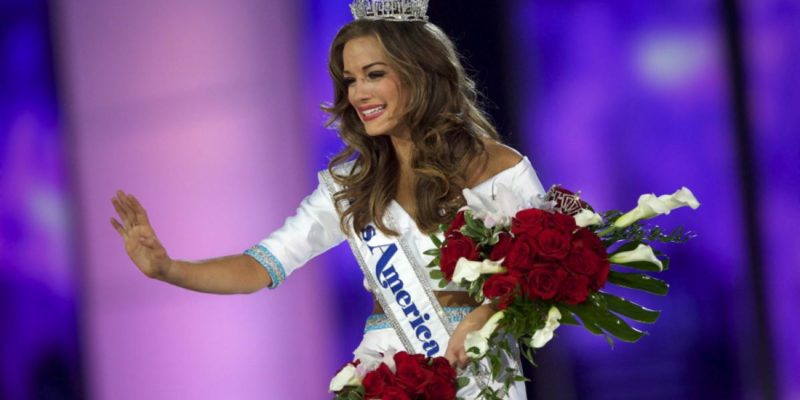 I would say that the contestants last night on Miss America were as dumb as rocks, but that would be insulting to rocks.

Of course Miss America pageants are about outside appearance, (though the feminists will say it’s about ‘inner-beauty,’ LOL, righttt), but the public still expects these women to still have a brain.

But, apparently, having the slightest idea of what is going on in the news a week before the Miss America pageant is asking for too much of the contestants.

It was after the “talent” competition that the infamous questions and answers round came up. Notice how the word “placed” in quotes, because besides Miss Georgia and Miss Louisiana, there was absolutely no talent on that stage.

The questions and answers portion of the competition was based, you guessed it, on 100 percent liberal/left-wing talking points.

Literally, it was as if every question was personally crafted by MSNBC’s in-house liberal lesbian Chris Hayes. Excuse me, I meant Rachel Maddow.

The only thing that could have made the Miss America questions more left-wing is if Vanessa Williams asked the “What do you think about a transgendered woman winning Miss America?” That’s the questions liberals always run to because they are just waiting to jump on the contestant’s back about being a bigoted human being.

“The Treasury wants to put the face of a woman on the $10 bill, beside Alexander Hamilton. Which woman should get that honor, and you tell me why?”

So, the audience at home sat around and thought of women like Susan B. Anthony or even maybe Besty Ross. That’s not what Miss Colorado had in mind, though.

This was Colorado’s answer:

“Thank you for that question. The person that I would put on the $10 dollar bill is Ellen DeGeneres. I think that woman is so amazing. Not only is she kind, not only is she intelligent, not only is her entire platform speaking tolerance and equality for all, and kindness — but she is able to be funny without insulting someone, and I think that is an incredible feat. Thank you.”

You read that correctly. Ellen DeGeneres.

With Miss Colorado’s answer came a roar of applause from the audience members, which mainly consisted of the family members of these pageant girls, thus proving that these Miss America contestants aren’t born dumb, they learn to be dumb from their equally dumb family members.

Then came the incredibly stupid and biased question from Vanessa Williams. Oh and if you were watching last night, the entire show was about Williams. She did a horrible rendition of some song that no one knew and was wearing a toga-like satin gown that made her look like one of those Syrian political refugees.

This was Williams’ question to Miss Tennessee:

“Some legislators are threatening to shut down the government over federal contributions to Planned Parenthood, even though no federal funds can be used for abortions. Should Planned Parenthood funding be cut off?”

First off, this is the perfect example of how the Left and Miss America pageant glorifies incredibly stupid women.

It’s the liberal idea that because women are dumb, they’ll just buy into anything having to do with Planned Parenthood because…. ‘women’s health.’

Naturally, though, she does not know that. Why? Because the Left and Miss America pageant cashes in on stupid women like Miss Tennessee.

President of Planned Parenthood Cecile Richards was probably grinning larger than Gary Busey last night when she heard that answer because she knows for a fact that it’s absolutely untrue.

Then there was the question about Kim Davis, the Kentucky Clerk of Court who went to jail for not signing her signature on gay marriage licences.

Liberals are infatuated with Davis. It’s almost like she’s a domestic terrorist. They would never actually ask questions to these dunces about real domestic terrorists like the Boston bombers who somehow got into the country, even though they were renowned jihadists. (But, remember, our legal immigration system works!)

Miss Mississippi was asked about Davis’ scandal by none other than the talent-less Zendaya.

If you’re not a 16 year-old girl (or me), then you do not know who Zendaya even is. Let me tell you. She’s one of these Disney Channel stars like Miley Cyrus. But, that’s not all.

The reason the Left loves her now is because she was a ‘victim’ of a hilarious joke frim Gulianna Rancic, the E! host. Basically, Rancic said that Zendaya’s dreadlocks at the Oscars last year made her look like she was a pothead (which they did.)

With that, Zendaya wrote up this massive letter to Rancic talking about the oppression that people with dreadlocks face and blah, blah, blah. Then Rancic had to publicly apologize on E! News or face getting fired.

If Joan Rivers were still alive, she would have flipped Zendaya the bird.

Getting back to Miss America, this was the question Zendaya asked:

“Kentucky county clerk Kim Davis was jailed for defying the Supreme Court’s order to issue same-sex marriage licenses. She claims the order violates her religious freedom. Does it?”

Now Miss Mississippi, to her credit, was one of the least dumb contestants on the stage and her answer reflected that. She essentially said, ‘Yes, Kim Davis broke the law.’

The larger point is that the Left and Miss America pageant even have youngsters like Zendaya dumbed-down to the point that they believe the most important question to ask is about an isolated incident in a tiny town in Kentucky. Forget Hillary Clinton’s emails, Kim Davis is so much more fashionable with the Left.

Lastly, the winner of this imbecile competition was Miss Georgia, who was not asked a political question (like every other contestant), but gave a really, really dumb answer and somehow still won.

Georgia was asked this:

“New England Patriots quarterback Tom Brady was suspended for his part in the so-called Deflategate scandal, then reinstated by the courts. Legalities aside, did Tom Brady cheat?”

And this was her answer:

“Did he cheat? That’s a really good question. I’m not sure. I think I’d have to be there to see the ball and feel it and make sure it was deflated or not deflated. But if there was question there? Then yes, I think he cheated. If there was any question to be had, I think that he definitely cheated and there and I think he should have been suspended for that. That’s not fair.”

First she does not know if he cheated, then she knows for a fact that he cheated. Let’s hope Miss Georgia is not planning to go to law school.

By the end of the night, however, Georgia won. Why? Well, because she was the prettiest of course. Obviously her winning had nothing to do with her answer.

Miss America will not pick smarter women to compete because then they might actually know the facts about Planned Parenthood or about incredible women in American history.

And we would not want women thinking for themselves. What would those rich, white liberal elite men do all day if these women thought for themselves?

Do not bank on Miss America picking smarter women for these ridiculous competitions. Miss America and the Left rely on these ‘all beauty, no brains’ women to showcase that women need the Left to survive.

These women do not need the Left. Quite the opposite. The Left need these women to be trained monkeys for their talking points because Hillary Clinton cannot do it alone.

Plus, no one wants to see Hillary’s kankles in a dress.

Interested in more national news? We've got you covered! See More National News
Previous Article VIDEO: Fun And Games At The Local Fair In Memphis
Next Article Here Are 6 Street Names That Will Be Changed If New Orleans’ Historical Monuments Are Removed