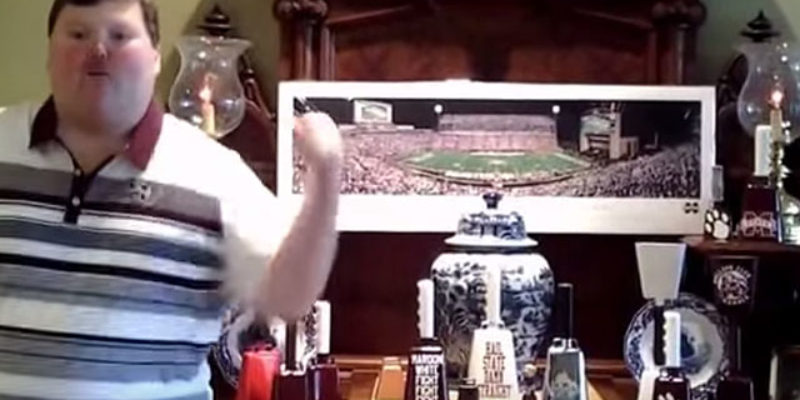 …after all, the fact that LSU’s tuneup game with McNeese State was actually rained out (a football game was rained out, for Pete’s sake, and you tell me you don’t hate the 21st century) could very well end up being a problem. LSU needed that shakedown cruise to give Brandon Harris an opportunity to see live defenses before having to go on the road against an SEC team, and they didn’t get it. So there is lots of reason to be nervous about Saturday’s game the way it has shaken out.

On the other hand, State has no film of LSU to speak of, and LSU has no injuries as a result of having its game cancelled after five minutes of action. LSU can thus prepare from a full game’s worth of film on State and that’s an advantage.

So this post will stay out of the question of what’s going to happen on Saturday and focus on something else.

Last year before the State game, we were witness to something embarrassingly lame coming out of Starkville. This might actually be worse.

This overfed clown is actually talking to Paul Finebaum in the video.

And why someone would attempt to convince Finebaum of something by use of a ranting YouTube video is, well – you’re on your own.

It’s probably shot in mom’s basement, of course. That looks like some of mom’s china amid the cowbells.