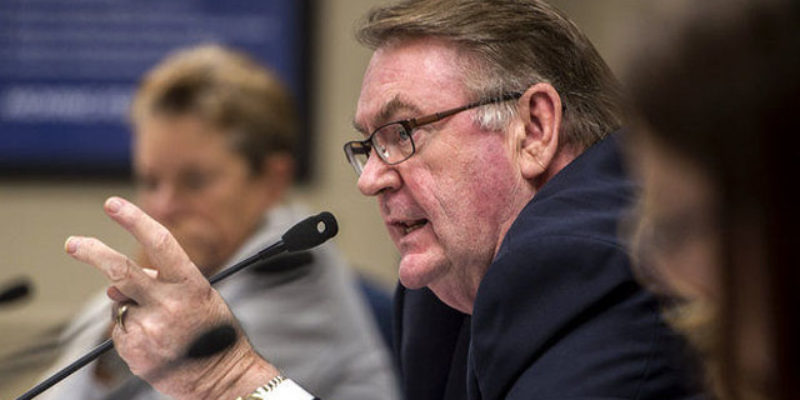 If you’re looking for an even dumber controversy than the Ben Carson vs. The Muslims flap going on nationally, we apparently have one in Baton Rouge now.

Our readers are well aware of our opinion of the Parish Executive Committee of the East Baton Rouge Republican Party, and the staggering incompetence and ineffectiveness both of its endorsement process and the follow-through which makes those endorsements matter (short version: they don’t, as evidenced by example of last year’s endorsement of every Republican in the 6th District congressional race EXCEPT for the one who won).

But this is a story of a controversy so stupid that we actually have to defend the PEC and one of its dimmer-bulb members – Jerry Arbour, the former school board poo-bah whose perpetual candidacy for this office or that in Baton Rouge has become the source of embarrassment on multiple occasions. Arbour was last in the news a year ago for making the rather tribalistic and malodorous statement that he expected to win re-election in a redistricted seat because “I believe that’s a white district.” just a short while before getting clobbered by black Democrat Evelyn Ware-Jackson, who had managed to earn the support of the business and school-reform communities.

This came a couple of years after Arbour ran unsuccessfully for Justice of the Peace, and during that campaign he told a gathering of local Republicans at which this writer was present that the East Baton Rouge school system was an economic development driver for the parish. That met with perplexed looks from the audience, who generally assumed that the poor quality of that school system is an economic development driver for adjoining parishes rather than East Baton Rouge. So there is a record of Arbour making perplexing statements that produce negative political effects.

Why Arbour is on the PEC is a good question. Parish Executive Committees are the absolute bottom level of elective office in Louisiana, and they’re for actual citizens interested in using the experience of being on a PEC as a training ground for the next level of political office, not has-been politicians turned out of public office by the electorate.

But when the EBR PEC was meeting to decide on an endorsement on the District 69 race last month, Arbour’s mouth has apparently put him in hot water again after the fact.

The exact details of the story appear sketchy, as the Advocate story accusing Arbour of telling Republican candidate Paula Pellerin Davis that “a woman’s place is in the kitchen” is hotly disputed by those who were present.

Legislative candidate Paula Davis was taken aback recently when a member of the Republican Party’s local executive committee told her that “a woman’s place is in the kitchen,” a comment others present said was made in jest.

Davis, a Republican, is running for the open District 69 House seat along with Republican Metro Councilman Ryan Heck and Democratic attorney Mark Holden. She said she was shocked when former School Board member Jerry Arbour uttered that phrase during her interview for the endorsement.

But Arbour insists he made the statement as a lighthearted joke.

The incident happened in August at the home of East Baton Rouge Republican Party Executive Committee chairman Woody Jenkins, where the candidates interviewed. Davis talked to the committee first, and then Jenkins asked her to wait in his kitchen — as all candidates were asked to do — while her opponent, Heck, interviewed.

“A woman’s place is in the kitchen,” Arbour added.

Davis said she turned to him and said, “I can’t believe you just said that.”

“I made that comment in a joking matter because it was a tense, relatively long meeting,” Arbour said. “I didn’t think anything of it, nor did anyone else. When I found out she took offense to it, I went and apologized.”

Davis said Arbour would not have needed to apologize if his comment was actually a joke. She said his tone was serious.

“I said, ‘What you said disgusts me,’ ” Davis said she told Arbour after his apology.

Arbour said he is not a chauvinist and that his comment does not represent his views on women. He said he has supported multiple women’s bids for public office, including 1st Circuit Court of Appeal Judge Toni Higginbotham and former Commissioner of Elections Suzanne Terrell.

Jenkins said he did not hear Arbour’s comment, though he was in the room at the time. He said Arbour’s statement was not offensive, unless someone is “hypersensitive.”

Why this is being reported now, rather than a month ago when it actually happened, is worth pondering.

In any event, Jenkins took to the comments under the article and his rage at the reporting in it was unmistakable…

This story is one of the worst examples of journalism I have seen in a long time. It is “creative news” — in other words, making news where none exists. At the same time, it ignores the real news that happened that day.

• On Monday afternoon, I received a call from the reporter who said she had heard that Paula Davis, a candidate in House District 69, was speaking at a meeting of the Chamber of Commerce of East Baton Rouge Parish when Jerry Arbour told her “A woman’s place is in the kitchen!” The reporter said Paula Davis was so highly offended that she stomped out of the meeting. I said I had no idea what she was talking about but that Paula Davis has never spoken at the Chamber of Commerce of East Baton Rouge.

• After we talked a bit longer, I told her that Paula did in fact speak at a meeting of the PEC, the East Baton Rouge Republican Parish Executive Committee on Saturday, August 8 — six weeks ago. The meeting was held at my home, because the Metro Council chamber where the PEC normally meets was unavailable on a Saturday. There are so many candidates on the ballot in the Oct. 24 election that the PEC has had to meet sometimes two or three times a week in order to give all the candidates who have requested an interview the chance to meet with us.

• I told the reporter I was unaware of any such remark by Jerry Arbour and that Paula certainly didn’t stomp out of the meeting or anything like that. She was a guest in my home, and I certainly would have been aware if someone had “stomped out.” The meeting lasted from 10 a.m. until about 1:30 p.m. Paula was interviewed by the PEC mid-morning. Before, during, and after her presentation at mid-morning she was smiling and friendly and seemed to be having a great time.

• Paula was one of the last people to leave at around 1:30 p.m.. As she was leaving, she pumped my hand vigorously and told me what a great time she had and how much she appreciated the chance to meet with us.

• I told the reporter that if Mr. Arbour made that remark, it was not some kind of policy statement that women have no place in politics or in any such nonsense as that. Rather, it was humor based on irony. I was sending a woman to the kitchen as part of her trial by fire of being interviewed by the PEC. So he apparently said, “A woman’s place is in the kitchen!” One could easily interpret the comment as meaning that “Your place is in the kitchen, because this unique situation requires that all candidates go there in order to be considered for the endorsement.”

• After hanging up the phone with the reporter, I called Mr. Arbour and he said that he did in fact make the comment and that it was intended as a humorous comment based on the irony of her having to go to the kitchen to wait. He told me that he learned she was offended by the comment and that he sought her out and apologized. He apologized not because any harm was intended but because he’s a gentleman and wouldn’t want her to feel she was treated unkindly.

• I asked the reporter if she was really going to do a story on this. And she said she was. How would you feel, she asked, if I were a woman and historically discriminated against and were told “A woman’s place is in the kitchen!”

• I told the reporter, Are you serious? I said, Are you so into political correctness that you can’t distinquish between a serious policy statement indicating some kind of bias against women and friendly banter based on the irony of a woman candidate being sent to the kitchen? If Ms. Davis was so offended and upset that day, she certainly didn’t indicate that to me, her host. Also, if she is that easily offended, she will find a lot to be offended about in the legislature.

• I told the reporter that the real news of the day was the answers the candidates for House District 69 gave to the PEC’s Endorsement Questionnaire. I said the candidates’ answers to the questionnaire explained their positions on a wide range of issues from taxes and spending to abortion and gay marriage. I told the reporter i could supply a copy of the Endorsement Questionnaires and that they would provide real news. However, the reporter showed no interest in getting those documents.

It could be that Davis ginned up this story in an effort to play the “female” card; reports of a poll of the race indicate she’s in third place behind Heck and Holden and has an uphill climb to make the runoff in District 69. But we tend to doubt that, given that District 69 is a deeply Republican district and in general Republicans of both sexes tend to be completely exasperated and disgusted by the stupidity of political correctness and the chilling effect it has had on interpersonal communications. Davis isn’t stupid and she would have to figure ginning this story up would backfire, and further, that it would make her look weak and immature.

But somebody tipped the Advocate’s Andrea Gallo off to the story. Whether that somebody was in Davis’ camp or not, who knows?

Jerry Arbour says stupid things, and perhaps an ironic joke in such circumstances might not be one of the smartest things he’s said. But this is hardly newsworthy material, particularly after the fact. That the perpetually-sanctimonious J.R. Ball decided to direct his personal Outrage Engine away from 14-year old stories about David Vitter and hookers and toward Arbour doesn’t change that.

And meanwhile, this buffoon inserts himself into the fray… 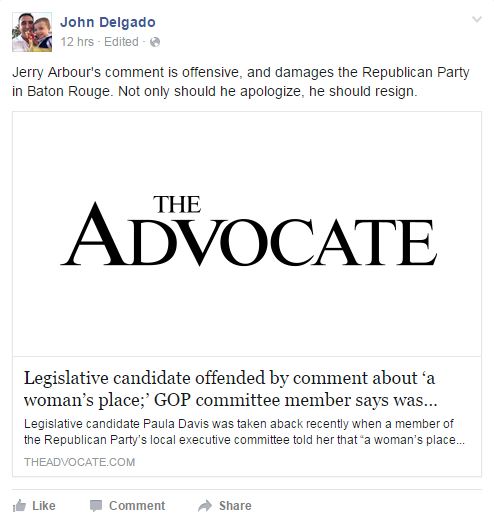 If Paula Davis really wanted Arbour’s resignation or to make this a campaign issue, one would think that she would have raised it weeks ago. To do it now looks less than honest, so again, it’s reasonable to assume she wouldn’t see any wisdom in doing so.

As for Heck, this has nothing to do with him and he shouldn’t have any involvement in such a moronic flap whatsoever.

Somebody probably ought to make note of the irony of John Delgado demanding anyone’s resignation for impolitic and stupid statements that unnecessarily inflame anger. Some 46.7 percent of everything that comes out of his mouth fits that category, and he tells anyone who will listen and lots of those who won’t about his plans to run for mayor next year.

Maybe we need a vacation. The stupidity around here is getting unbearable.

Interested in more news from Louisiana? We've got you covered! See More Louisiana News
Previous Article The New York Times Notices The Problem Of Afghani Child Rape And The Military’s Inability To Deal With It
Next Article BRIGGS: New Governor Must Address Tort Reform