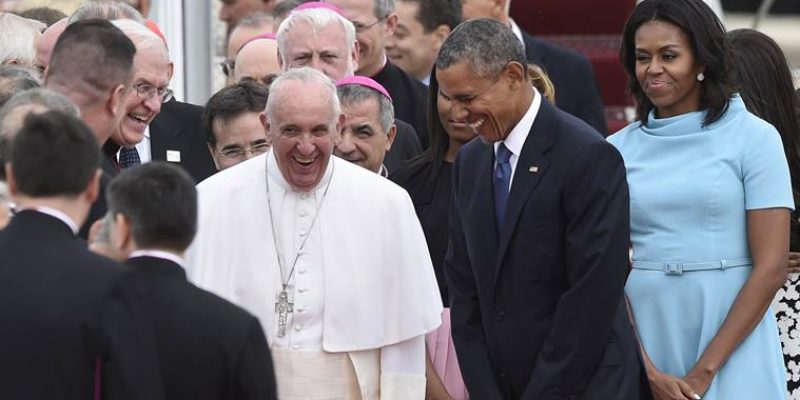 It’s currently Pope Francis mania around the country as the leader of the Catholic Church visits America for the first time.

However, American Catholics sadly should be ashamed of the welcome Pope Francis has been given thus far at the White House by the Obama administration.

The guest list of supposed ‘religious leaders’ invited to the White House to greet Pope Francis included anyone and everyone that is opposed to Catholic doctrine and the teachings of the Church.

The White House basically picked from a pool of left-wing activists who have disguised themselves as ‘tolerance fighters’ just to drum up some controversy around the Pope’s visit to America.

So who are these ‘religious leaders’ that are so worthy of meeting Peop Francis at the White House?

What exactly is the litmus test to meet the Pope at the White House? Apparently, it’s whoever disagrees with the Catholic Church on LGBT issues and abortion.

The mere presence of these guests at the White House to meet Pope Francis is not the insulting aspect of this.

Of course the leaders of the LGBT community and abortion activists disagree with church doctrine. That does not mean they should be excluded from meeting or being in the presence of Pope Francis (because Catholics are actually some of the most tolerant individuals, contrary to what the media will tell you).

However, to purposefully stack the White House guest list for when the Pope arrives with leaders of opposition groups to the Catholic Church is a slap in the face to Pope Francis and the Vatican.

Where were the LGBT and pro-abortion leaders when Muslim leaders, many of which had ties to the Muslim Brotherhood, visited the White House back in 2012 and earlier this year?

The Muslim faith in the Middle East is notorious for publicly hanging gay men and pushing them off of skyscrapers blindfolded, yet when Muslim leaders come to the White House, the Obama administration does not stack it with LGBT leaders.

That is because it’s much more fun to bash Catholics and Christian teaching. Not only is it cool (because it makes you popular with the California, New York and Washington DC elites), but it’s easy. Catholics will simply stick up for their doctrine, continue to be tolerant and move on.

The fact that the White House would outright try to trump or embarrass Pope Francis with a slew of leftist social justice activists is shameful to the Pope and insulting to American Catholics.

Whether you agree with Pope Francis’ views on global warming and economics, it is without doubt that his motto for growing the Catholic Church has always been one about unity and acceptance.

This is contrary the Obama administration’s strategy for the country which has proven to be nothing but division and identity politics.

Now that the Pope is in America, maybe he can teach the President a thing or two about bringing people together.

Interested in more national news? We've got you covered! See More National News
Previous Article It Seems Like We Have A Vitter-Angelle Primary Going On
Next Article VIDEO: Third Party Money Enters The Attorney General Race