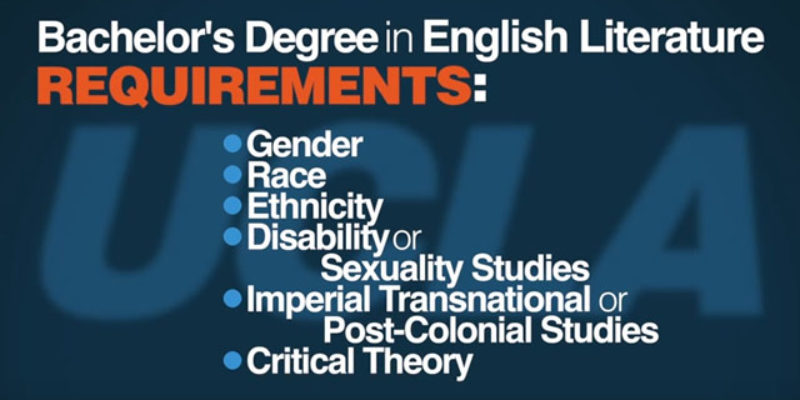 Heather MacDonald from the Manhattan Institute narrates the latest Prager University video, and this one is a must-see. It’s about what the Cultural Marxist Left has done to the humanities in American universities – a damage so profound that a student at UCLA, for example, can achieve a bachelor’s degree in English without ever having read a single one of Shakespeare’s plays or sonnets…

I can personally attest to this even as an old fart of 45 years. My freshman year of college began in the fall of 1988, and I was in the Honors Department at Southern Methodist University in Dallas – a more conservative university by reputation you will never find. But even there, the course syllabus for my freshman Honors English class included the Communist Manifesto, the anti-colonialist Things Fall Apart by Chinua Achebe, and the feminist diatribe A Room Of One’s Own by Virginia Woolf.

If you want to Google syllabi for freshman English courses at universities around the country, you’ll find most of the same crap MacDonald is talking about, and what I experienced.

The market should kill this garbage, but of course it isn’t allowed to – because universities not only have a monopoly on “organized” higher learning, but get massive state subsidies to do so. So when the cultural Marxist Left does their Gramscian march through the institutions and forces all the conservatives out of the humanities in our universities, there aren’t any good options on how to restore actual culture to our culture.

And the result is cultural decline.

The first step in attempting to reverse the decline is to understand it isn’t happening organically. It’s happening because there are people actively burning down the foundations of our culture, and opposing those people.