Welcome to your one-stop shop for news, rumors, numbers and results as Louisianans pick the primary winners and losers for the 2015 election cycle. The Hayride staff will be updating this post as developments roll in, so refresh this page continually.

(MacAoidh, 11:17 p.m.) – I’m wrapping up as well, and tomorrow I’ll have a more complete wrapup with some thoughts.

But on the way out, I’ll pass this along. It’s the statement on the primary by the Republican Governors’ Association…

“As a dedicated leader for Louisiana, David Vitter has been committed to making government work better for the people by cutting wasteful spending and fighting back against President Obama’s executive overreach,” said RGA Chairman Bill Haslam. “His record of reform shows that he knows what it takes to solve Louisiana’s most pressing issues. The RGA is proud to support David Vitter to be Louisiana’s next governor.”

“A vote for John Bel Edwards is a vote for Barack Obama, big government and higher taxes,” said RGA Communications Director Jon Thompson. “Instead of standing up for Louisiana, John Bel Edwards has repeatedly supported Obama and championed his liberal agenda, even writing the bill that would expand Obamacare in the state. Louisianans can’t afford four more years of Obama’s failed policies and that’s exactly what they would get with an Obama liberal like John Bel Edwards in charge.”

Here’s the problem – RGA came in a couple of weeks ago with a million-dollar ad buy and ran a completely anodyne, John Bel Edwards-is-Obama spot. And that didn’t work.

People in Louisiana don’t have any use for Obama, for sure, but merely yelling “Obama” isn’t enough. Obama has been president for so long that the supply of outrage is basically gone. Obama is almost a fact of life.

Fortunately, there are a good many such issues. Pointing them out is the absolute best way to bring home even the recalcitrant Angelle and Dardenne voters who say they won’t vote for Vitter but probably haven’t thought it through.

But the trick is going to be that Vitter, or supporters of his like the RGA, are going to have to do so without making Vitter look like a mean, nasty guy who attacks his opponents.

Vitter is fortunate in that Edwards is in over his head. His campaign is more or less broke, and his messaging is paper-thin. Saying that Vitter and Jindal are identical is a dumb thing to do when Vitter will have a giant pile of money to spend on putting that notion to bed – and making Edwards out to be a liar in the process.

Running 17 points behind Edwards is absolutely not where Vitter thought he would be, but he’s getting the runoff matchup he wanted all along. Vitter’s efforts to bring the GOP vote home over the next 10 days could make this a completely different election in November. But he has a lot of work to do.

(John Binder, 11:15 p.m.) – Now that the results are finally wrapping up, here are just a few thoughts/takeaways from tonight’s election:

First off, this gubernatorial run-off between John Bel Edwards and David Vitter will be very interesting, considering the Louisiana media is fully in the tank for Edwards. Not to mention, Edwards is already claiming tonight that Vitter has “embraced” the unpopular Gov. Bobby Jindal. Actually, that’s a lie. Vitter and Jindal hate each other. But, we’ll be monitoring how the media skews this run-off with Democratic talking points.

Additionally, this Attorney General run-off between Buddy Caldwell and Jeff Landry seems to be in Landry’s favor, as many of the anti-Caldwell votes will go to him. If Landry can continue to call-out the pay-to-play schemes that Caldwell has immersed the AG’s office in, he might find himself as the new Attorney General.

Also, conservatives should be thrilled that Julie Emerson, the 27 year-old newcomer from Carencro, has ousted State Rep. Stephen Ortego (D-Carencro) in a major win. Emerson ran on conservatism and it clearly worked in the Lafayette area.

Stay with the Hayride over these next four weeks to get all the latest coverage on the gubernatorial and Attorney General run-off races and to see the Louisiana media’s biases exposed.

A couple of thoughts, first the new legislature is not as conservative as the last one. Conservative candidates were beaten all over the state and many of the conservatives in runoffs are not favored to win.

Secondly, David Vitter is going to have a tough runoff battle. Yeah more people voted for Republicans today, but the Democrat GOTV operation was intentionally quiet today. Also there are a lot of hard feelings in the Angelle and Dardenne camps. If Vitter can rally the Republican and conservative vote, he will win. The question is can he.

(MacAoidh, 10:36 p.m.) – John Bel Edwards is on WAFB making the claim that David Vitter has “embraced Bobby Jindal all along the way.”

(MacAoidh, 10:34 p.m.) – Some of the results in North Louisiana show where Vitter’s troubles may have come…

“I’m humbled by tonight’s results. Challenging an incumbent is never easy as the margin of victory indicates. The incredible effort and support of so many new friends and cherished old ones certainly made the difference.”

“The theme of my campaign is a ‘voice for our values,’ but to me, it’s more than a political slogan. It’s a responsibility the voters have entrusted me with. We’ve knocked on thousands of doors, made thousands of phone calls, and shaken countless hands. While it’s the best way to win an election, it’s also the best way to stay in touch with your constituents you represent. I’m honored by this responsibility and will remain available and accountable to the people of District 39.”

(Kevin Boyd 10:01 p.m.) Jay Dardenne and Scott Angelle have both conceeded defeat in the governor’s race. Angelle’s speech was the far classier of the two.

We can also call a runoff in House District 69 between Paula Davis and Ryan Heck.

We’re not prepared to call House District 32, but with 91% reporting, Democrat Dorothy Sue Hill is at 50%.

(Kevin Boyd, 9:49 p.m.) -The legislature is mostly status quo. Republicans only gained one seat so far in the State House and have lost one seat in the State Senate. So much for anti-incumbent mood.

(MacAoidh, 9:45 p.m.) – More parishes are completely in, and looking over the newest completed returns in south Louisiana, you can see why David Vitter only holds a slim 23-21 lead over Scott Angelle for the second place finish and a runoff spot behind John Bel Edwards’ 39.

Vitter did exceedingly poorly in the southwestern part of the state, and badly underperformed in Ascension. He should not have been tied with Angelle there.

(John Binder, 9:40 p.m.) – At just 27 years-old, conservative Julie Emerson just ousted incumbent State Rep. Stephen Ortego (D-Carencro) in the House District 39 race, with 51 percent of the vote. This is a major victory for conservatives in the district.

(MacAoidh, 9:26 p.m.) – Several parishes are completely in, and they show weakness for Vitter and surprising strength for Angelle, particularly in the northern part of the state.

Vitter should have run higher in those two New Orleans parishes.

(John Binder, 9:25 p.m.) – Julie Emerson, the LAGOP’s ‘Rising Star’ is at 52 percent with 85 percent reporting in her race to oust State Rep. Stephen Ortego in House District 39. Ortego is currently at 48 percent.

Also, the French Quarter tax increase on residents to help pay for more NOPD protection in the area is largely passing with 74 percent voting ‘yes’ with 13 percent reporting so far.

(John Binder, 8:50 p.m.) – With 57 of 64 parishes’ absentee ballots reporting in the Attorney General race, we are now calling a run-off between incumbent Buddy Caldwell and former Louisiana Congressman Jeff Landry. Currently, Caldwell has 38 percent and Landry is at 33 percent.

(MacAoidh, 8:45 p.m.) – Bad news for the Ryan Heck campaign, at least in the absentee voting. He’s tied at 37 percent with Paula Davis, with Democrat Mark Holden at 26. Heck was hoping to draw Holden in the runoff; Davis is a tougher race. We’ll see if Election Day voting changes the numbers.

Also, the Ace of Spades Decision Desk has called it that John Bel Edwards will be one of two gubernatorial candidates in a run-off election, garnering 39 percent in absentee ballots so far with 55 of 64 parishes.

(MacAoidh, 8:11 p.m.) – 25 of 64 parishes’ absentees counted, and in the governor’s race John Bel Edwards has 37 percent, Scott Angelle 25, David Vitter 22 and Jay Dardenne 14. From the looks of the results in other races, it appears most of what has been counted is in the southwestern part of the state.

(John Binder, 8:10 p.m.) – Absentee ballots in 12 of 64 parishes in the Attorney General’s race have Jeff Landry at 39 percent with incumbent Buddy Caldwell right behind at 38 percent.

(MacAoidh, 8:01 p.m.) – In the AG race, there will likely be a runoff between Buddy Caldwell and Jeff Landry, so today’s weather probably won’t decide things. But that having been said the geography and the weather could well play with the numbers…

(John Binder, 8:00 p.m.) – Polls have closed and results should start coming in within the next hour. I’ll be live-blogging on multiple races, but with a strong focus on the Louisiana Attorney General’s race. We’re interested in seeing if voters are tired of incumbent Buddy Caldwell’s pay-to-play deals.

(MacAoidh, 7:55 p.m.) – Polls close in five minutes, and we should have some numbers to offer shortly thereafter.

(Kevin Boyd, 7:21 p.m.) – Very upbeat mood here at the Vitter party. They seem to be very pleased with how the race is going and with the turnout so far. They see the low turnout as helping the Senator.

(John Binder, 7:15 p.m.) – Polls close in an hour and gubernatorial candidate Scott Angelle has decided to hold his election night party in private, which could be a not-so-good sign for the Cajun conservative.

Also, David Vitter was in St. Tammany Parish today getting the vote out and talking to constituents. Even though polls are closing very soon, negative TV ads against John Bel Edwards and Scott Angelle are still running.

Lastly, we’ll definitely see tonight if those nasty and desperate attacks on David Vitter by the mainstream media and their Democratic operatives have any impact in the polls.

(MacAoidh, 7:00 p.m.) – This wouldn’t seem to favor a candidacy. It’s either a colossal disqualifier or one of the worst election-eve social-media dirty tricks we’ve ever seen.

We endorsed Biscuit Smith in his House race against Dorothy Sue Hill; she’s a Democrat with a voting record that doesn’t fit that conservative district north of Lake Charles. We didn’t endorse this, though… 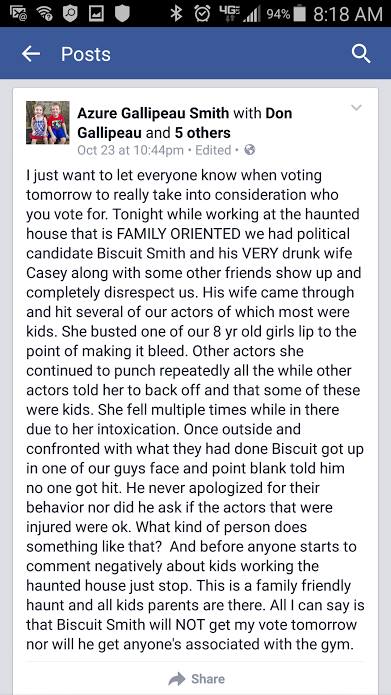 (Kevin Boyd, 6:16 p.m.) – The rain has largely held off both in St. Tammany Parish and Jefferson Parish, where I’m at right now. I’m at the hotel where Vitter will be having his victory party. I was talking to St. Tammany insiders who told me the parish was expecting a turnout in the 45-50% range. That’s good news for Vitter. St. Tammany is a parish he must do well in. I do wonder though if turnout is being driven by the down ballot races for the legislature and parish offices instead of statewide races. If that’s the case, your guess is as good as mine as to who that benefits.

(MacAoidh, 5:34 p.m.) – It’s raining virtually everywhere in the state, and the effect on turnout has been pronounced. Reports are coming in that turnout in Orleans Parish was around 20 percent as of 4:00, and in South Baton Rouge it was no better. We’re looking at an election with turnout likely under 40 percent at this point.

Interested in more national news? We've got you covered! See More National News
Previous Article Would You Like To Hear The Inside Story On The David Vitter “Spy Scandal” In Metairie Yesterday?
Next Article The Voters Made A Clear Statement In Favor Of School Choice Last Night