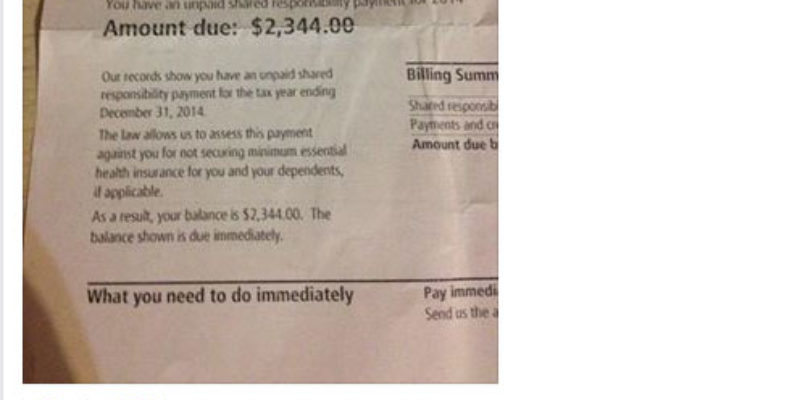 You’ll see images like this all over social media… 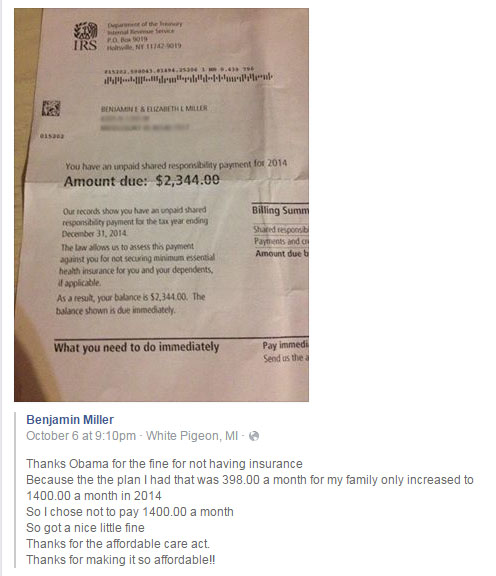 This isn’t anything new. But you’re going to see more and more of it, because the costs of Obamacare are skyrocketing – and several of the health care co-ops set up to dole out insurance under the law are failing.

A sixth ObamaCare insurance startup announced it will shut its doors on Wednesday, escalating concerns about the future of a program designed to increase competition in the marketplace.

Tennessee’s insurance commissioner released a statement saying that its health insurance startup, also called a co-op, will no longer offer health plans in 2016 due to the growing financial burden.

“With thousands of Tennesseans’ coverage hanging in the balance, [the co-op’s] financial success could not be guaranteed,” commissioner Julie Mix McPeak wrote in a statement Wednesday afternoon.

The decision comes less than a week after the collapse of Kentucky’s co-op. The two programs are among 23 that received seed money from the federal government to help create alternatives to traditional insurers — money that is looking less likely to ever be repaid.

Like Kentucky’s, Tennessee’s closure was also abrupt: The program had planned to offer coverage in 2016 and had already gotten approval for its new rates.

But McPeak said the state changed course this week after learning that it will get less help than expected from the federal government through its “risk corridor” program. That program is designed to protect insurers, including co-ops, from heavy losses in the early years of the healthcare law by reallocating money from better-performing insurers to those that are still struggling.

The Obama administration, however, announced on Oct. 1 that the program would pay out far less than requested because the payments coming in were not enough to match what insurers requested to be paid. Therefore, insurers only will receive 12.6 percent of the $2.87 billion they requested.

As those co-ops fail, and as insurers vacate the market because the requirements to offer coverage under Obamacare impose costs which make it unprofitable to do so, the remaining players will be charging much more for insurance. Which means fewer people can afford it, which means more people getting demand letters from the IRS for thousands of dollars payable immediately. Which means more people in financial trouble, which means less money available for consumer spending…

When it comes to the U.S. economy big-picture outlook, the ramifications are more complicated, and not particularly pleasant.

Wednesday’s producer price index reading, showing a monthly decline of 0.5 percent, demonstrates a larger problem: At a time when policymakers are hoping to generate the kind of inflation that would indicate strong growth, the reality is that deflation is looming as the larger threat. Declining prices often would be treated as a net positive by consumers, but income weakness is offsetting the effects.

Even Wall Street is feeling the heat. Prices for brokerage-related services and financial advice dropped 4.3 percent in September, accounting for about a quarter of the entire slide for final demand services.

…which means a recession. Which Tyler Durden at Zero Hedge says is already upon us…

Here we go again. The dying legacy media will continue to support the status quo, who provide their dwindling advertising revenue, by papering over the truth with platitudes, lies, and misinformation. I have been detailing the long slow death of retail in America for the last few years. The data and facts are unequivocal. Therefore, the establishment and their media mouthpieces need to suppress the truth.

They spin every terrible report in the most positive way possible. They blame lousy retail results on the weather. They blame them on calendar effects. They blame them on gasoline sales plunging. That one is funny, because we heard for months that retail spending would surge because people had more money in their pockets from the huge decline in gasoline prices.

September retail sales were grudgingly reported by the Census Bureau yesterday morning and they were absolutely dreadful. This followed an atrocious August report. The MSM couldn’t blame it on snow, cold, flooding, drought, or even swarms of locusts. So they just buried the story in their small print headlines. The propaganda media machine had nothing. They continue to spew the drivel about a 5.1% unemployment rate as a reflection of a booming jobs market. If we really have a booming jobs market, we would have a booming retail sector. The stagnant retail market reveals the jobs data to be fraudulent. The 94 million people supposedly not in the job market can’t buy shit with their good looks.

Despite the storyline about consumer austerity being the reason for sluggish spending, the facts prove otherwise. Consumer spending accounted for 68% of GDP in 2008 at the peak. Seven years later it still represents 68% of GDP. The difference is the spending has shifted dramatically towards services since the Wall Street created financial crisis. Spending on services has grown by 31% versus 20% for goods since 2008. Guess what has caused that surge?

Spending on healthcare has skyrocketed for the average person. Rent, taxes, utilities and educational expenses have all exploded higher. Meanwhile, real median household incomes are 7% lower than they were in 2008. They are 7% lower than they were in 2000 and equal to the level of 1989. And the bubble headed bimbos on CNBC can’t understand why retail sales aren’t booming? Did they get their journalism degrees from the University of Phoenix or Trump University?

The entire post is well worth a read. What’s true, however, is that the cost of Obamacare – which is no longer being reported even in the conservative media – is strangling the economy.

We will be in an unmistakable recession by this time next year. The question is whether the media will report it as a depression, which is what we’ve been in since 2008.

If you know your history of the Great Depression, you’ll recognize that Obamacare is the modern version of Taft-Hartley, the stupid tariff that closed off international trade and turned a rough recession into a decade of economic misery that led to world war. The question is whether we’ll have a world war at the end of this road we’re on.

Interested in more national news? We've got you covered! See More National News
Previous Article The Low Popahirum, October 15, 2015
Next Article YIKES! Parking In New Orleans Is About To Become A Luxury With These Proposed Rate Hikes