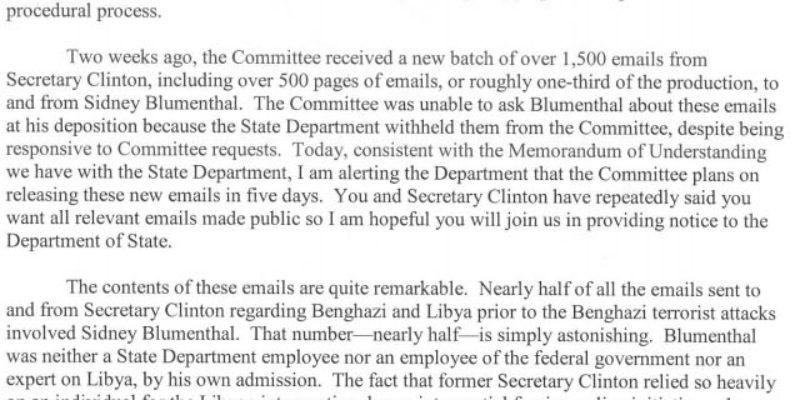 …and it shows what the Republican Party can look like in Washington when smart people, rather than drunks, beta males and hacks, are at the controls.

Here’s a link to it, but we have a little bit of background to offer.

Gowdy is, of course, the Chairman of the Benghazi Select Committee. In that role, he’s had two problems in finishing that committee’s work and presenting conclusive findings to the public.

The first is Hillary Clinton’s refusal to turn over all pertinent documents. Her maintenance of a private e-mail server and mendacious refusal to turn over all of her e-mails until those were taken by the Justice Department recently put the committee in a position of spinning its wheels with respect to the direction of its inquiry. Without knowing what orders were given at the highest levels of the government with respect to what happened in Benghazi and how the Libya policy which produced the Benghazi massacre came about, it’s been very slow going.

And the other problem, which has festered somewhat underground until coming into some very bright lights recently, has been constant attempts by the Democrat Party to delegitimize the work of the committee. It’s been called a partisan witch hunt from the start, which is why it’s only a House committee and not a joint committee of the House and Senate – at the time it was formed the Democrats held the Senate and they refused to appoint any members because they called it a witch-hunt. That wasn’t a major problem for Gowdy and he’s had public opinion on his side from the beginning, but when Kevin McCarthy opened his mouth and bragged about how Hillary Clinton’s approval ratings have tanked as the revelations about her e-mails have tumbled forth, which he ascribed to the work of Gowdy’s committee (which is only partly true; Hillary e-mail revelations have come from a number of sources), the Democrats have been on a full-court press to have the committee lit afire as the witch-hunt they’ve decried all along.

And that’s the genesis of this letter. The ranking Democrat on the committee, Rep. Elijah Cummings of Maryland, put out a communique demanding that the committee be shut down; this is Gowdy’s response.

And it’s worth reading for no other reason than how deftly Gowdy cuts Cummings into ribbons for having played the role of partisan shill for Hillary and the Obama administration.

But what makes the Gowdy letter truly fascinating is some of the revelations it offers to the public about how our Libya policy was built.

Prior to the release of this letter we’ve had some indication of Sid Blumenthal’s role as an unofficial advisor to Hillary Clinton – a role expressly forbidden by Hillary’s boss in the White House, who had made it unmistakably clear he didn’t want a sleazebag like Blumenthal anywhere near his foreign policy. It turns out that Hillary went behind Obama’s back and was taking a great deal of advice from Blumenthal, and not much of it good.

And it also turns out that Blumenthal was giving Hillary advice on Libya policy because he had financial incentives to steer her in certain directions, which ultimately led to four Americans getting killed by the local Benghazi Al-Qaeda affiliate.

An excerpt that will blow your mind…

The Blumenthal-Clinton e-mails, which the public has been denied access to (and we can completely understand why), are extremely damaging. It’s understandable that the Democrats would like to keep them away from the public. Thanks to the Benghazi special committee we now know how our Libya policy was made and why it collapsed amid a hail of bullets and mortar shells at our Benghazi consulate.

We don’t have a full picture of that policy, but we’re getting there. And while Gowdy has been working largely behind the scenes, this letter in response to Cummings’ trying to shut the committee down shows that real, actual work has been going on in that committee.

Interested in more national news? We've got you covered! See More National News
Previous Article VIDEO: If You Want To See Why Ben Carson Is Doing So Well, This Is Why
Next Article EXCLUSIVE: This Louisiana Parish Is Now A Sanctuary City For Illegal Immigrants