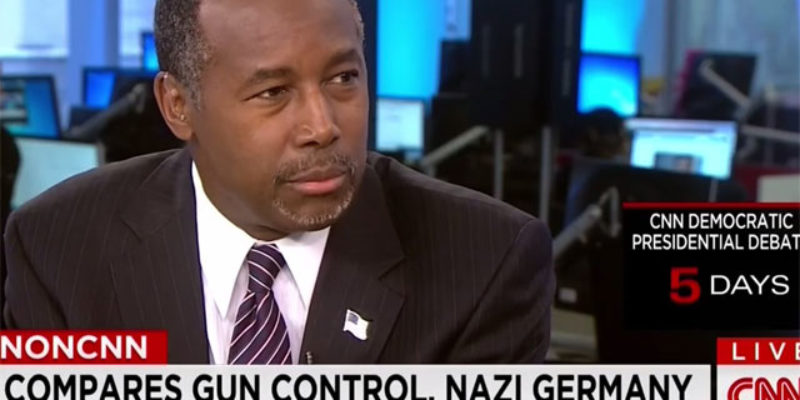 CNN’s Wolf Blitzer has Carson on for what they’re clearly hoping is a gotcha interview that eats him alive over his perfectly reasonable comments advising people that when trapped in a room with a mass shooter it’s better to rush him and take his gun, even if that means some of his intended victims do get shot, than to beg for mercy or cower and hope for rescue.

But it’s difficult to eat Carson alive, as it turns out, particularly if you’re a relatively low-wattage intellect like Wolf Blitzer. He confidently, calmly brushes off Blitzer’s attempts at gotcha questions or efforts to make him look like a fool or a cretin – starting with the advice for prospective victims of a mass shooter, gun rights and what he wrote in his new book about the historical pattern of tyrannical governments disarming the citizenry before turning them into subjects.

The video, and then some commentary below…

Can we ask why it’s so “insensitive” for Carson, in response to a question about Roseburg, to suggest that future prospective mass-shooting victims act aggressively in their own self-defense? Apparently it is because what he said can be interpreted as “critical” of the victims.

And why is it “critical?” Because nobody can be expected to know what to do in such an impossible situation, right?

That’s why it’s a public service for Ben Carson to put it out there that if you’re in a situation like Roseburg you’ve got to act. That you need to get everybody in that classroom to rush the shooter and take his gun away as quickly as possible, because that’s the best chance you have to survive.

Incidentally, having a good guy with a gun in that classroom who puts one between the shooter’s eyes before he can turn his dastardly deed into a mass-casualty event is even better than having a bunch of would-be victims rushing him. If Chris Mintz, the Army veteran who ultimately took seven bullets and survived while rushing the Roseburg shooter, had a weapon that day it would have been a much less grave incident.

There are two reasons why Carson’s critics simply have to shut up. First, any military or even self-defense expert will tell you that you have to have a plan for how to deal with emergency situations in advance, because without a plan the emergency will get out of control. The very substance of why Carson is “mean-spirited” or “insensitive” for “criticizing” the Roseburg victims is that they can’t be expected to know what to do. Well, that shouldn’t be acceptable. If we’re going to have a generation full of fatherless, socially alienated losers whose response to failing as men is to attempt to leave this planet with as many corpses in their wake as possible, then the rest of us had damn well better be prepared in how to handle the worst when it comes. And Carson should get credit, not criticism, for raising that fact as advice for actual human beings rather than a matter of political promises or government policy.

His comments ought to be taken in the precise spirit fire drills are conducted, or air-raid drills were conducted in classrooms during the Cold War. Before the example and advice set by the passengers of Flight 93 on September 11, 2001, the standard behavior when on a plane being hijacked was to sit quietly and wait for the hijackers to land the plane in Havana or Tripoli whereby you’d be ransomed. After 9/11 passengers knew what to do, and that’s why the underwear bomber wasn’t able to rain pieces of bodies and aircraft all over downtown Detroit on Christmas Day 2009.

The military educates its commanders in doctrine and tactics for the precise purpose of avoiding the annihilation of its troops in combat situations. And military doctrine dictates that when caught in an ambush lean forward into the fight and close with the enemy so as to negate his advantage. This is the same principle. It’s good advice. And good advice should never be decried as “insensitive.”

Second, Carson’s critics need to shut up because their underlying message is disgraceful and horrific. What they’re saying is that people should NOT have a plan, that they should NOT take initiative, that it’s irresponsible to do so and that they must depend on the authorities – the government – to bail them out of such circumstances. This relates to the segments of the interview that discuss gun control and citizen disarmament; an unarmed people have no choice but to wait on the government to rescue them, because they lack the tools to do the job themselves. And citizens who are incapable of self-reliance are not citizens; they are subjects to be ruled even without their consent. Carson isn’t speaking that language, and it’s clear the Wolf Blitzers of the world are under orders to destroy him for it.

The problem is, Carson is a lot better at this stuff than the low-wattage intellects of the lefty media like Blitzer.