This one is by RRH Elections, which is an offshoot polling operation of Red Racing Horses – a political junky blog we frequent often. They’ve decided to take up collections from their readers and poll races, and the LAGOV race is the latest project within that effort.

The poll is an IVR, which is a robopoll, and the sample size is 359 voters. It was apparently taken in two tranches – Nov. 12 and last night. That’s not great, but there is some method to the madness here which might offer some credibility to the results.

From the poll memo…

Surveys were also conducted of the two downballot statewide races, which show clear favorites but many undecideds. In the race for Lieutenant Governor, Billy Nungesser (R) posts a strong lead over Kip Holden (D), 43-29. In the race for Attorney General, Jeff Landry (R) leads incumbent Buddy Caldwell (R) 45-25. The IVR survey of 359 likely voters was conducted from November 12th to November 16th and has a margin of error of 5%.

The survey was designed and conducted by RRH Elections (formerly Red Racing Horses) and paid for with the generous donations of our readers; robocalls were placed by PMI Inc. of Marianna, Fla. RRH Elections is run by a group of eight volunteer editors and has no connections to any candidate or group active in these races. RRH Elections can be found at rrhelections.com. 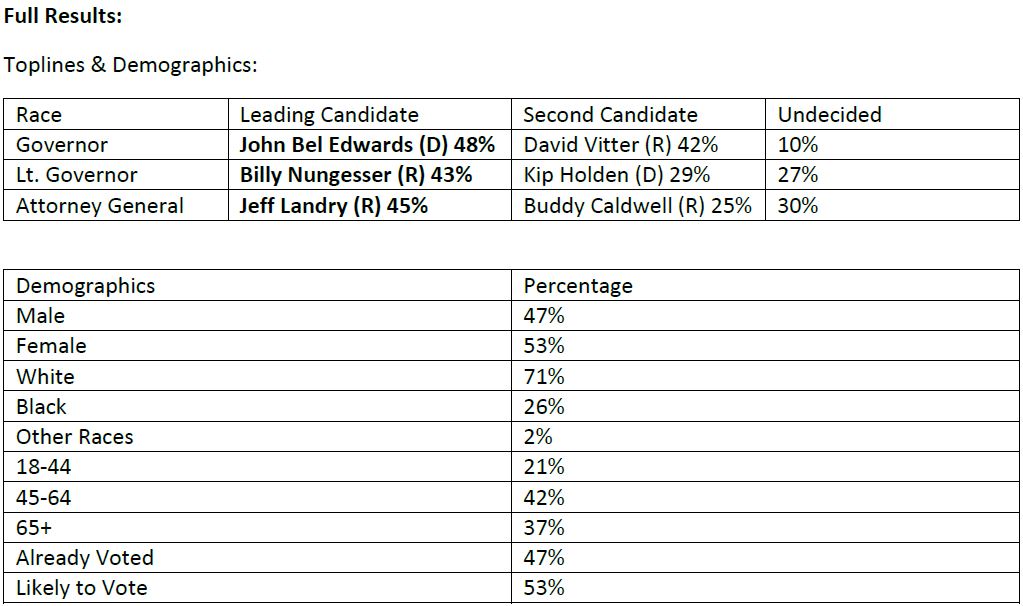 Among those that voted in the October preliminary in this sample, we found that 43% voted for John Bel Edwards (compared to 40% in the actual results), 29% voted for David Vitter (23% in the results), 17% voted for Scott Angelle (19%), and 11% voted for Jay Dardenne (15%). The drop-off in Angelle and Dardenne voters relative to their performance in the primary may be reflective of decreased enthusiasm among the supporters of the candidates who did not make the runoff. 16% of voters included in this survey did not participate in the October primary, consistent with the reports we have seen of increased turnout for the competitive November runoff.

The survey design and statistical analysis of results for this survey were performed entirely by RRH Elections. Calls were placed by PMI inc. of Marianna Fla. to a list of 5000 randomly selected voters on November 12th and 16th. Approximately 80% of the numbers dialed were from voters who had participated in the October 2015 preliminary election, while the remainder were voters that had not voted in October 2015 but had participated in the November 2012 presidential election. We felt this electoral composition was an accurate estimation of who may be likely to turn out in the November runoff election. From there, voters were asked if they had already voted or were likely to do so; those who indicated they were unlikely to vote were excluded from the survey. If a respondent did not complete the topline questions, their response was marked as undecided. If a respondent did not complete the demographic questions, the answers to those questions were inferred from the voter file. The survey was weighted for race, gender, and age. Random deletion was not used as a method of weighting. Racial weighting was achieved by setting the black turnout in the subsample of those that had already voted to be equal to the known black turnout in the early vote, while age and gender weighting was achieved with a more holistic interpretation of prior electorates.

We really don’t like dividing the polling between Nov. 12 and Nov. 16, because that essentially means they did two separate polls. Particularly in a race like this which appears to be moving in Vitter’s direction, that would make us curious to see what the results of the Nov. 12 polling look like compared to last night. And the likely voter screen is OK, but ideally you’d want people who voted more than just either in the primary or the presidential election in 2012 – the 2014 Senate runoff would probably be a better screen.

And weighting such a small sample can lead to some skew in the numbers – which might not quite show up in the governor’s race, which at six points with a five point margin of error sounds like what we’re hearing could be the case in some of the internal polls being conducted by the campaigns, but that 20-point margin for Jeff Landry might be a little on the high side.

Perhaps the most surprising result from this poll was the finding that David Vitter, who has trailed in every recent poll of the race, is actually leading with the subsample of those that have already voted. This result is despite the fact that the subsample of those that have already voted is weighted to have a higher black vote percentage (29.5%) than the overall percentage (26%). This result suggests that Vitter’s core conservative voters have been highly motivated to turn out early, while Edwards’s voters are waiting until Election Day. Edwards also leads with those that did not vote in the primary election, suggesting that higher turnout on Saturday will be a good sign for him. Vitter and Edwards are both doing a good job of holding on to their primary voters, taking 90% of those that supported them in October.

Those that backed the two eliminated candidates, Angelle and Dardenne, seem mostly to be sticking with the party, with a majority supporting Vitter. However, there seems likely to be a turnout dropoff among those voters, who may find both Edwards and Vitter unpalatable. As for demographics, nationally typical patterns predominate: Edwards leads with younger, female, and black voters, while Vitter leads with older, male, and white voters. These results suggest that Edwards needs to focus on voter turnout in the last few days, particularly among voters who did not turn out for the first round in October. To pull the upset, Vitter’s focus should likely be on winning over Angelle and Dardenne voters, who may consist of Republicans uncomfortable with his personal issues. For now, these results show that Edwards is in a strong position to win, but perhaps not an overwhelming favorite – as conventional wisdom may have indicated in recent weeks.

In the downballot races, Plaquemines Parish president Billy Nungesser (R) and former congressman Jeff Landry (R) appear to be in good position in their races for Lieutenant Governor and Attorney general respectively, leading by double-digit margins. Though both races have many undecideds, Nungesser and Landry are nearly at 50%, so there would likely need to be a major swing toward their opponents in the last few days for either to lose.

This poll probably shouldn’t be taken as offering the reliability of the Hayride/MarblePort poll of last week, which showed the same result. The race is probably closer than six points right now. But its basics, that Edwards is perhaps holding a slight edge but is struggling to get to 50, and Vitter is making progress in clearing the Angelle and Dardenne voters off the board and over to his side, and perhaps that despite successful Democrat GOTV efforts in Orleans, Caddo and East Baton Rouge Vitter might actually be leading among those who have voted early, are worth noting as the race moves to its final week.