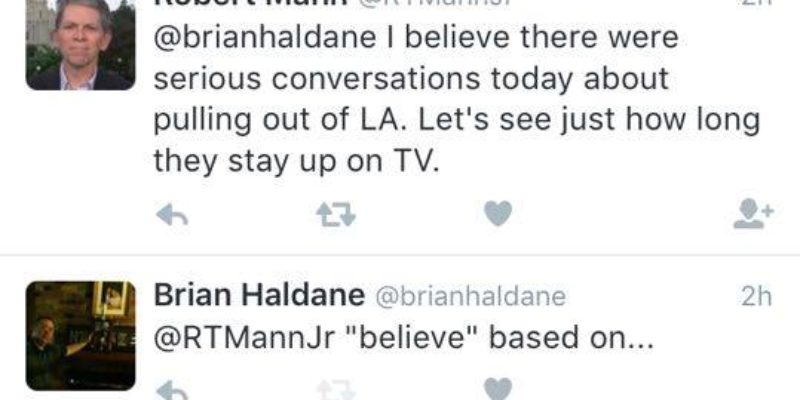 UPDATE: Now we’ve got it. May it live in infamy… 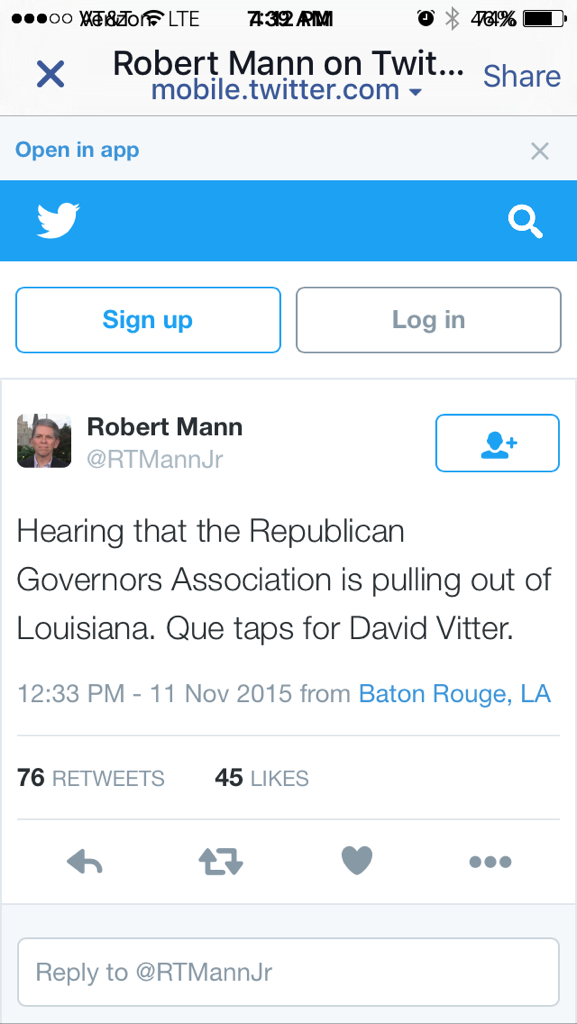 ORIGINAL POST: The original went away before we could screenshot it.

But shortly thereafter, there was this…

RGA will be going up with ad buy in Louisiana — initial report inaccurate. New spot out tomorrow. (Via @HotlineKaryn)

I don’t usually delete my tweets, but I axed the one about (false) rumors of RGA pulling out of LA. Too many people still retweeting it. 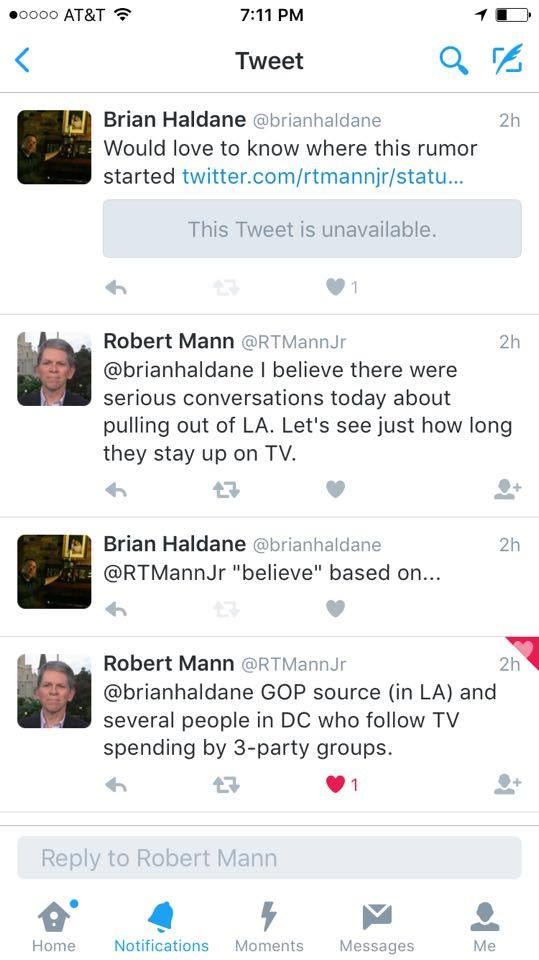 And when we were made aware of it we asked Jon Thompson, the spokesman for the Republican Governors’ Association. He told us this…

Yes – it’s an inaccurate report. The RGA made a new ad buy today and will have a new TV ad debuting tomorrow morning.

It was, if his aim was accuracy, insane for Bob Mann to go around saying that the RGA was pulling out of the Louisiana gubernatorial race. The RGA has a sizable pile of cash available, is coming off wins in Mississippi and Kentucky and only has Louisiana left on its plate. There is no reason why they wouldn’t keep playing in the Louisiana governor’s race.

And yet he ran out with a tweet repeating a rumor that was obviously untrue, because of a “source” he has. Or so he says.

This is of a piece with that suspicious error the Baton Rouge Advocate made last week in reporting that two of the staunchest conservative lobby groups in the state, the Louisiana Homebuilders Association and Associated Building Contractors of Louisiana, had endorsed John Bel Edwards instead of David Vitter. Not only was that obviously false, as the endorsements of Vitter had gone out in a press release by the Vitter campaign, but the error was a ludicrous one to make. And yet it persisted beyond the Advocate’s print deadline and made it into the Friday paper. It was suspicious in that it fed a narrative of Edwards’ – that being he’s a “conservative Democrat” who’s acceptable to conservative groups and voters.

Mann’s error feeds another narrative of Edwards’, which is that the Vitter campaign is finished and cannot win. That’s designed to dispirit conservatives and Republican voters, and it’s completely untrue. We know this because the most credible public poll, which was released last Thursday by Triumph Campaigns, had Edwards leading by a 49-41 margin but the sample was 51 percent Democrat. While in early voting that could be an accurate sample due to GOTV efforts by Democrats for the early ballots, Democrats reflect only 46 percent of registered voters and typically end up less than that by the time the election has passed.

And were Triumph to have adjusted their sample accordingly, the race is probably within the margin of error.

That was a week ago and there is no reason to think that Edwards, with his failed, though continuing, nasty attack ad which got him a public, to-his-face poke in the eye from decorated hero and Louisiana Department of Veterans’ Affairs outreach coordinator Mike McNaughton today, would be gaining momentum.

We’ve been told by two sources that internal polling out of Washington on the race has Edwards trapped in the mid-to-high 40’s and Vitter within the margin of error. While that could be optimistic from Vitter’s perspective, it’s also perfectly in line with the fundamentals of the race and the recent history of contested statewide elections.

Bob Mann, decorated journalist and political pundit and possessor of longstanding credibility – to such an extent that we might be justified in calling him Lord Bob owing to his lofty sinecure at LSU – would have to know these things.

So why would he repeat unsubstantiated, wild rumors difficult to believe given the fundamentals of the circumstances they describe?

The answer could be in his explanation for why he deleted the tweet. Too many people were retweeting it.

One might think his tweet was meant to plant the seed of a narrative that RGA was getting out of the race and have it percolate for a day or so before it was debunked. Problem is, it got retweeted around so that it became a topic of conversation on the same day RGA had made a new media buy. And planting a lie into the bloodstream that could get halfway around the world before the truth put its pants on wasn’t going to work under the circumstances.

So Mann had to pull the tweet for fear he’d pay a price in credibility.

This wasn’t an honest mistake and nobody ought to give Bob Mann the benefit of the doubt. He’s a propagandist who also today called the Louisiana Association of Business and Industry a “nefarious, anti-worker group” and painted its endorsement as having been “engineered” by former Jindal staffer Stephen Waguespack – when that’s categorically false. The reason LABI’s four PAC’s have only endorsed in three governor’s races out of the last nine is its rules demand a 75 percent vote of the members of each of the four PAC’s separately before they’ll endorse. That’s a huge hill to climb, but the members climbed it anyway because of the thuggish and stupid actions Edwards took in antagonizing them. At that point the endorsement was member-driven, and a foregone conclusion when it certainly hadn’t been, and Waguespack didn’t have to “engineer” anything.

Again, Lord Bob has been around long enough to know these things, and yet he was suddenly ignorant of them.

Sure he was. And if you believe that, I have a great newspaper in Baton Rouge to sell you.