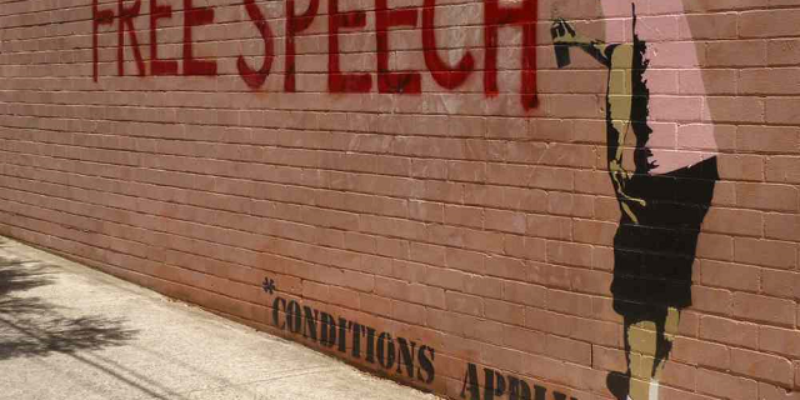 As The Hayride reported yesterday, a goal of the Social Justice Warrior crowd has always been to eliminate free speech. Even more disturbingly, some self-described libertarians are ready to provide them aid and comfort.

Yesterday, an essay appeared at the Students For Liberty website that asks libertarians to choose between “compassion and free speech purism.” The writer, Liz Wolfe, is a student at William and Mary University in Virginia.

She starts with this “brilliant” thought:

As libertarians, our inclination is to defend free speech at all costs. But as people – and people who care deeply about oppression – it’s our obligation to look deeper into the tension between free speech advocacy and the black experience at Mizzou and Yale.

Well libertarians defend free speech “at all costs” because of the “libert” part. A libertarian is simply someone who believes in liberty. The only oppression libertarianism concerns itself with is state oppression.

We should interrogate how the Constitution’s definition of black people as property rather than citizens, changes the way that people of color view the First Amendment.

Stop right there. The Constitution has nothing to do with slavery in 2015 and has had nothing to do with slavery since 1865. After all, the United States is a country that sent over 300,000 soldiers to their deaths in a war that ultimately ended that “peculiar institution.” The 13th Amendment ended slavery and the 14th amendment granted all Americans born in the U.S. citizenship, regardless of their race.

The institutional memory of black communities in America, in general, is astounding.

The evidence for her argument is an op-ed by a race pimp, Ta-Nehisi Coates, who argues for reparations. Here’s an excellent rebuttal of the Coates school of thought. The state denied blacks their freedom. The answer is not to restrict free speech or dismiss it as “purism” (after all civil rights was won in 1960s by using freedom of speech), the answer is to expand it more.

Which of these two name don’t go with the others? “Hands up, don’t shoot” was a lie. While the Ferguson PD used its citizens as an ATM, the evidence reviewed by the state and Federal authorities showed that Mike Brown did charge and attack Officer Darren Wilson

While I think most people would agree George Zimmerman is an ass, there wasn’t enough evidence to convict him of murder over Trayvon Martin’s death. The burden to prove guilt “beyond a reasonable doubt” is a feature, not a flaw, of our system.

Here’s what the last three have in common: government involvement. The Sandra Bland investigation is still underway, but it’s clear that Garner and Rice were needlessly killed by police officers. To lump those two cases, and even Sandra Bland in with Trayvon Martin and Darren Wilson is intellectually dishonest.

How can you trust your university, when it’s halls have been decorated with  racist flyers (2012), racist graffiti (2011), a Swastika (2015), andvarious messages that make it clear your peers see you as inferior because of the color of your skin? Duke and Mississippi saw nooses hanging from trees; a Yale fraternity thought it perfectly acceptable to have a white-only party. The message is clear: if you are a black person on a college campus, you are not safe from the violence of racism, even in 2015.

“Violence of racism?” Is this a joke? Yes racism is awful and should be condemned, the acts of vandalism described should result in expulsion, and the fraternity that allegedly had the white-only party should have its charter revoked by the national fraternity. But “violence of racism?” Words have meaning. Those racist dicks have the right to be a racist dick just as the writer has the right to be a vapid SJW.

Also, a few messages on social media and people being asses on campus is not serious evidence of an epidemic of racism on campus. If you want to experience oppression on a college campus, try being a conservative or a Christian.

When your fundamental rights are infringed upon – or you have a reasonable fear that they could be, at any moment, in a place that functions not only as your school, but your home – I think it’s fair to not champion free speech quite as much as you normally would. I think it’s fair to be angry.

In other words, if you hurt someone’s feelings and say the wrong things, Liz Wolfe is fine with not championing your free speech. Got it.

As libertarians, we have always fundamentally concerned ourselves with oppression and the situations faced by students at Mizzou are among the most poignant examples of oppression that I can see in the United States today.

If most Millennial libertarians are anything like what Liz Wolfe is pushing, I want nothing to do with them. In fact, I consider them Trojan Horse enemies who pretend to advocate liberty while actually promoting cultural Marxism.

After all, only someone who isn’t a big fan of free speech would use the phrase “free speech purism.”

Interested in more national news? We've got you covered! See More National News
Previous Article What’s The Truth About Where The Louisiana Governor’s Race Stands?
Next Article The Battlefield, November 13, 2015