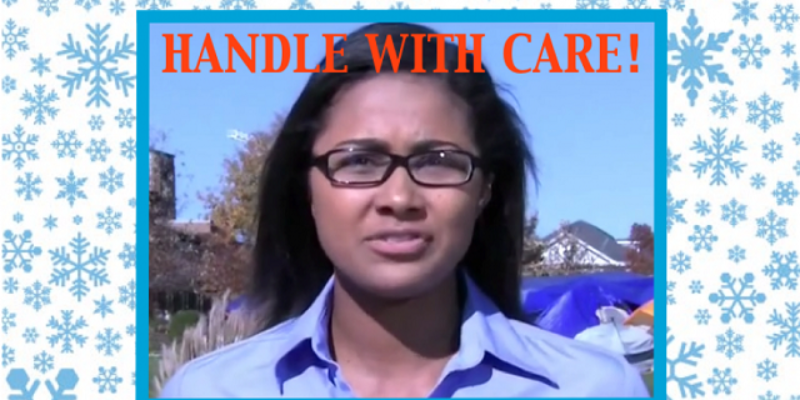 The cat is out of the bag. The Social Justice Warrior crowd is all about censoring ideas they don’t agree with. They’re so fragile that they literally cannot handle opposing views.

The Mizzou SGA VP had this blunt remark to MSNBC when she was asked about whether or not colleges were becoming places of censorship and prohibition. Here’s what this little totalitarian, by the name of Brenda Smith-Lezama, said:

“I personally am tired of hearing that First Amendment rights protect students when they are creating a hostile and unsafe learning environment for myself and for other students here. I think that it’s important for us to create that distinction and create a space where we can all learn from one another and start to create a place of healing rather than a place where we are experiencing a lot of hate like we have in the past.”

Be sure to watch the video in the linked Mediaite post.

So how did we get this far? Why have American universities gotten to the point where they foster the intellectual climate similiar to the that of Mao’s Cultural Revolution or the French Revolution’s Reign of Terror? Scott McKay actually had a good column today at the American Spectator that explains how we started going down this road.

This summer, the excellent Michael Walsh delivered to the public an excellent book — The Devil’s Pleasure Palace: The Cult of Critical Theory and the Subversion of the West. In its pages, Walsh discusses the damage the cultural Marxists of the Frankfurt School, a group of radical academics imported to America in the 1930s as they fled persecution from Hitler’s goons, did to post-war American society.

The Devil’s Pleasure Palace is important work and it deserves reading, because it illuminates partly how what used to be an American culture that enhanced and strengthened the society it reflected up until the cultural Marxist influence began changing that culture into something else.

And that change emanated from the universities, where the rot began.

It’s not just the fault of liberals, Republicans are to blame as well. Take for example here in Louisiana, the RINO Legislature that decided to raise taxes by $700 million this past session before making any cuts in higher education. Scott explains why Republicans are aiding their own enemies:

Republicans have controlled many, if not most, of the governorships in America over the past several decades in which education spending has skyrocketed out of control.

This was done for a number of reasons, of course. For one thing, Republican voters tend to be huge fans of college athletics, and thus respond extremely well to the idea of building palaces on campus to compete with neighboring states on athletic fields, and, oh yeah, in the classroom as well. For another, it’s long been held that excellent universities are a prerequisite, or at least a major driver, for economic growth.

But fundamentally, the thinking has been that driving millions of teenagers into college and delivering them out of the universities armed with degrees would create a massive class of college-educated, white-collar upper-middle class suburbanites who would dutifully vote Republican ad infinitum.

It’s so bad that many of these universities, if not most, are little more than hyper-expensive adult day care facilities, offering zero training in useful skills to the majority of their students and producing the worst generation of overgrown children imaginable. Missouri and Yale aren’t outliers; they’re just this week’s examples of campus idiocy on parade.

If it was just Democrat state legislators and governors appropriating tax dollars toward ruining the universities, it would be bad enough. But Republicans did the same thing, and worse than that they made no effort to insure that traditional American cultural and political perspectives were given their due hearing. Republican politicians have stood by as conservative faculty have been hounded out of taxpayer-funded academia, and now there is barely a Republican to be found at a Missouri or Yale.

What’s the solution here? The solution is to bring markets back into play for higher ed. Why not make higher education funding based on the enrollment of well qualified students?

State support for public universities should be restricted to some kind of scholarship program for students who meet certain academic qualifications, like TOPS. The state will also help cover the cost of infrastructure maintenance, but other than that, universities sink or swim in the free market.

But we need more than that. We need to radically restructure student loans. Why not base interest rates based on upon the future prospects of a major? If a student takes a major where there is job market demand, they get a lower interest rate. Finally, student loans should be able to be discharged in bankruptcy court like other loans. No more special deals for Sallie Mae.