It seems John Bel Edwards is his own personal battlefield. And he’s a hotly contested one at that.

After all, who is John Bel Edwards? Is he the nice guy with the West Point honor code? Or is he something else?

It’s worth asking, because Edwards began the week with an ad so toxic and un-Christian, so irresponsible and vile, that even national pundits of a Democrat stripe said it was the nastiest they’ve ever seen. He even had to pull and re-cut the ad after veterans protested his use of Arlington National Cemetery gravestones as a backdrop for his assertion that Vitter missed a vote on a resolution honoring casualties from an Iraqi missile attack during Desert Storm because he took a call from the DC madam.

Edwards has defended the ad by saying it’s true, though he has no idea whether it is. Phone records indicate Vitter took a call from Deborah Jane Palfrey on the afternoon the vote in question took place, though there is no evidence that call was the cause of his missing the vote. One might say such a wild charge with no actual proof of its veracity would rub against the edges of the West Point honor code Edwards claims to live by.

The code doesn’t say a lot about hypocrisy, which is perhaps a good thing for Edwards. After all, he missed a vote of his own where honoring military veterans was concerned.

You read it right the first time.

Edwards skipped a vote, specifically for HB 232 in 2011, that would have allowed spouses and children of Louisiana National Guardsmen killed serving both in Louisiana and abroad to receive in state tuition benefits to Louisiana colleges and universities. This law would have directly affected the national guardsmen killed this year because it specifically retained the existing law that only applied to members killed abroad and added those killed here at home.

Not only that, but Edwards skipped a vote for HB 404 last year that recreated the Department of Veterans Affairs.

We don’t know what he was doing at the time. We can’t say we have any more proof that he was out poisoning baby rabbits or holding seances with the ghost of Karl Marx than Edwards has that Vitter was dallying with prostitutes while missing votes in Congress instead of being on hand for those bills at the Legislature. But by the standard of fairness Edwards has displayed in his ad we think it’s fair to check the records from his ouija board.

And by putting the Arlington gravestones in the background of the ad, Edwards also raised an issue that would never have arisen in the race – that being that Vitter intervened with the Defense Department to insure that a Louisiana National Guardsman killed in a Black Hawk helicopter crash off the Florida coast in March during a training exercise was buried at Arlington. That would not have happened otherwise.

But for hypocrisy, you really can’t beat the events of the last 48 hours where Edwards is concerned.

First, there was his refusal to attend a candidate forum at Southern University, one which Vitter attended and took some fairly pointed questions from a hostile moderator. That moderator, blogger Gary Chambers of The Rouge Collection, went absolutely ballistic in response to Edwards’ scratch of his attendance and published elements of an e-mail thread with Edwards’ campaign indicating that he didn’t want to appear at Southern for fear of alienating white voters. He instead was raising money with trial lawyers.

This after spending months chiding Vitter for dodging debate appearances, many of which were due to Vitter’s having business in the U.S. Senate up in Washington – after all, isn’t Edwards’ chief critique of Vitter in that ad the fact he missed a vote on Capitol Hill?

Then, Edwards skipped another debate. This one was a conversation about social issues put on by the Louisiana Family Forum at a Baton Rouge church. Edwards was busy with something else; namely, a rally at a place which couldn’t be more opposite of that church. Club Lyve, a New Orleans nightclub known for a somewhat sketchy scene, had the invitation for Edwards’ rally, which offered free drinks and a party bus delivering attendees to early voting, next to other notifications of its coming events yesterday in such a fashion as to provide delicious entertainment… 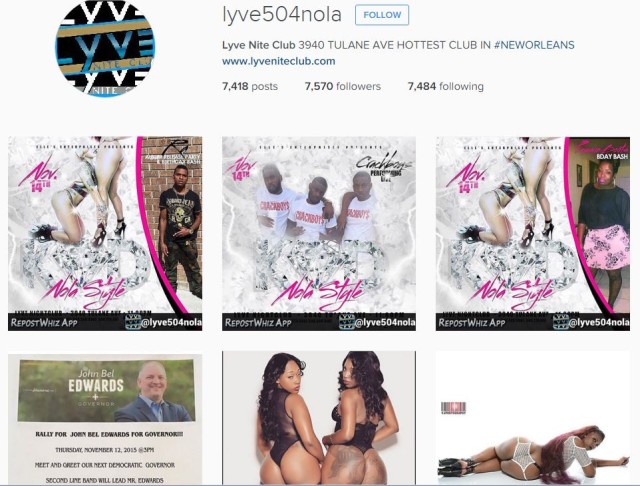 No word on whether the “Crackboys” provided musical stylings to the rally.

When word of the Club Lyve Instagram notices got out, Edwards’ event was quickly taken down. And meanwhile, after Vitter questioned his pro-life credentials at the Family Forum event he missed because he was entertaining the guests at the Tulane Avenue juke joint, Edwards’ wife Donna called the Senator’s comments “hurtful and offensive.”

“The real difference between my husband and David is that John Bel lives his values every day,” she said.

Sure he does. Those values don’t appear to be what he says they are, however.

Then we understand that Edwards, who won’t lie, cheat or steal or tolerate those who do, has hired Baton Rouge political fixer Pat Bergeron for his campaign’s homestretch. That’s an interesting choice, as Bergeron was known as the facilitator of Mike Foster’s having bought David Duke’s mailing list before the 1995 gubernatorial campaign and most recently worked for Scott Angelle’s gubernatorial campaign.

We suspect, though likely will never be able to prove, that it was Bergeron who sent to us shortly before the primary election a pair of thumb drives containing audio files of a woman named Mary Jennings describing details of an alleged 20-year affair with her boss at the time, Jay Dardenne. We didn’t run with any of that, because dealing in the personal destruction of a political candidate through promotion of old scandal is beneath the floor of respectable politics, but we do find it interesting that Edwards would have accepted Dardenne’s endorsement and bloviated about the injustice of his treatment by Vitter while at the same time hiring an operative known for decades in Louisiana politics for the kinds of dirty tricks that would describe Operation Thumbdrive.

As an aside, how does this look for Dardenne? He endorsed Edwards out of pique at Vitter’s primary-cycle attacks on him, the worst of which was an ad questioning his spending practices as Lt. Governor surrounding a European trip which however unfair it might have been was still limited to his record in office, and no sooner did he share a podium with the Democrat but Edwards unveiled that ugly personal shot at Vitter – and then Edwards hires an operative who (we think) was sending material out for dissemination that would slime Dardenne as a philanderer in his own right. And all while polls show that the voters think Dardenne’s motives for the endorsement weren’t honorable but instead selfish and base.

And we’ve not talked about an actual issue in this campaign yet.

Vitter called Edwards “holier than thou” at Tuesday’s debate, which is likely charitable. Edwards’ problem is that while he’s been successful, with help, in driving up Vitter’s negatives in advance of the runoff he’s doing so at the cost of his own credibility and that honor code he says he lives by. And at the end of the day, we’ll find out whether voters who will come to be as disgusted with his conducted as they may be with Vitter’s will opt for a Democrat with Edwards’ left-wing record against the demonstrated political conservatism of Vitter.

– Welcome to the New Orleans Monument Zero-Sum Game. I figured it’d be Lil’ Wayne they want to replace Robert E. Lee with rather than Allen Toussaint, but it had to be somebody.

– I have a new favorite bete noire. Melissa Click, the fire-engine-red moron at the University of Missouri who made herself famous asking for black “muscle” to expel a reporter from her little Lord Of The Flies campus protest, happens to be the personification of unproductive, wasteful and destructive left-wing academia.

As the Daily Caller notes from her laughable curriculum vitae, in 2009 Click received a taxpayer-funded grant to attend a Twilight convention. And her dissertation was entitled “It’s ‘a good thing’: The commodification of femininity, affluence and whiteness in the Martha Stewart phenomenon.”

– Which reminds me: here’s my American Spectator column for the week, which went up yesterday. It’s on Click and the rest of the morons at Mizzou, and their compatriots at the cultural Marxist hothouses across the country profiting off your tax dollars and the debt of your kids, whom they are indotrinating against you. David French at National Review might have said it better, which isn’t a surprise since French isn’t just a great writer but has specific experience in fighting these clowns for the last several years.

– Wait – Hillary is now claiming she tried to join the Marines? She’s not really claiming that, is she?